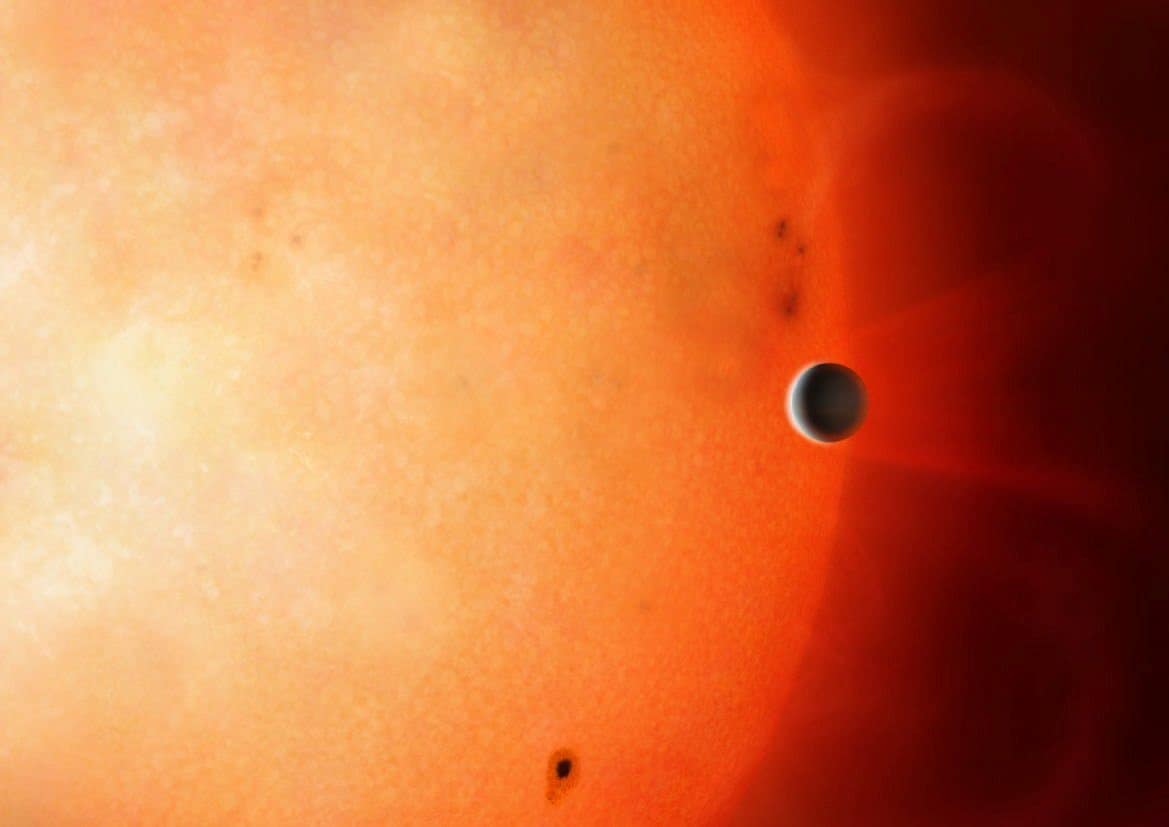 A massive planet 1,000 light years from Earth is close to the edge of destruction, say British astronomers.

The mysterious world is so near its star that a ‘year’ lasts just 18 hours – the time it takes to complete a full orbit.

Known as a ‘hot Jupiter’, it is imperilled – to the point that complete vapourisation is inevitable. It faces being torn apart by tidal forces.

It could shed light on how long a planet can survive such an environment before spiralling to its eventual fate.

The gas giant is about a billion years old and similar in size and composition to our own Jupiter. It travels around the star in less than a day of Earth time.

Its the closest any exoplanet – those outside our solar system – has ever been seen to a sun, say the University of Warwick team.

Named NGTS-10b, it was discovered during a study of the night sky by telescopes based in Chile.

The Next-Generation Transit Survey (NGTS) watches stars for a telltale brightness dip. This shows when a planet, down to the size of Neptune, has passed in front.

Lead author Dr James McCormac said: “We are excited to announce the discovery of NGTS-10b, an extremely short period Jupiter-sized planet orbiting a star not too dissimilar from our Sun.

“We are also pleased NGTS continues to push the boundaries in ground-based transiting exoplanet science through the discovery of rare classes of exoplanets.

“Although in theory hot Jupiters with short orbital periods – less than 24 hours – are the easiest to detect due to their large size and frequent transits, they have proven to be extremely rare.

“Of the hundreds of hot Jupiters currently known there are only seven that have an orbital period of less than one day.”

Described in Monthly Notices of the Royal Astronomical Society, it caught the team’s eye due to the very frequent dips in the star’s light caused by the planet’s rapid orbit.

Incredibly, this is only twice the diameter of the sun. To put it in context, it is 27 times closer than Mercury is to our own Sun.

At any one time the survey observes 100 square degrees of sky which includes around 100,000 stars.

The planet is believed to be tidally locked so one side is facing the star all the time – and constantly hot.

The astronomers estimate the average temperature to be more than 1,000 degrees Celsius.

NGTS-10b is also an excellent candidate for atmospheric characterisation with the upcoming James Webb Space Telescope.

Using a scanning technique called transit photometry, the scientists know the planet is 20 percent bigger than Jupiter and just over twice the mass.

Co author Dr David Brown said: “It is thought these ultra-short planets migrate in from the outer reaches of their solar systems and are eventually consumed or disrupted by the star.

“We are either very lucky to catch them in this short period orbit, or the processes by which the planet migrates into the star are less efficient than we imagine, in which case it can live in this configuration for a longer period of time.”

The astronomers plan to apply for time to get high-precision measurements of NGTS-10b, and to continue observing it over the next decade.

This will determine whether the planet will remain in orbit for some time to come – or spiral quickly into the star to its death.

Co author Dr Daniel Bayliss added: “Over the next 10 years, it might be possible to see this planet spiralling in. We will be able to use NGTS to monitor this over a decade.

“If we could see the orbital period start to decrease and the planet start to spiral in, that would tell us a lot about the structure of the planet that we don’t know yet.

“Everything that we know about planet formation tells us that planets and stars form at the same time.

“The best model that we have got suggests that the star is about 10 billion years old and we would assume that the planet is too.

“Either we are seeing it in the last stages of its life, or somehow it is able to live here longer than it should.”