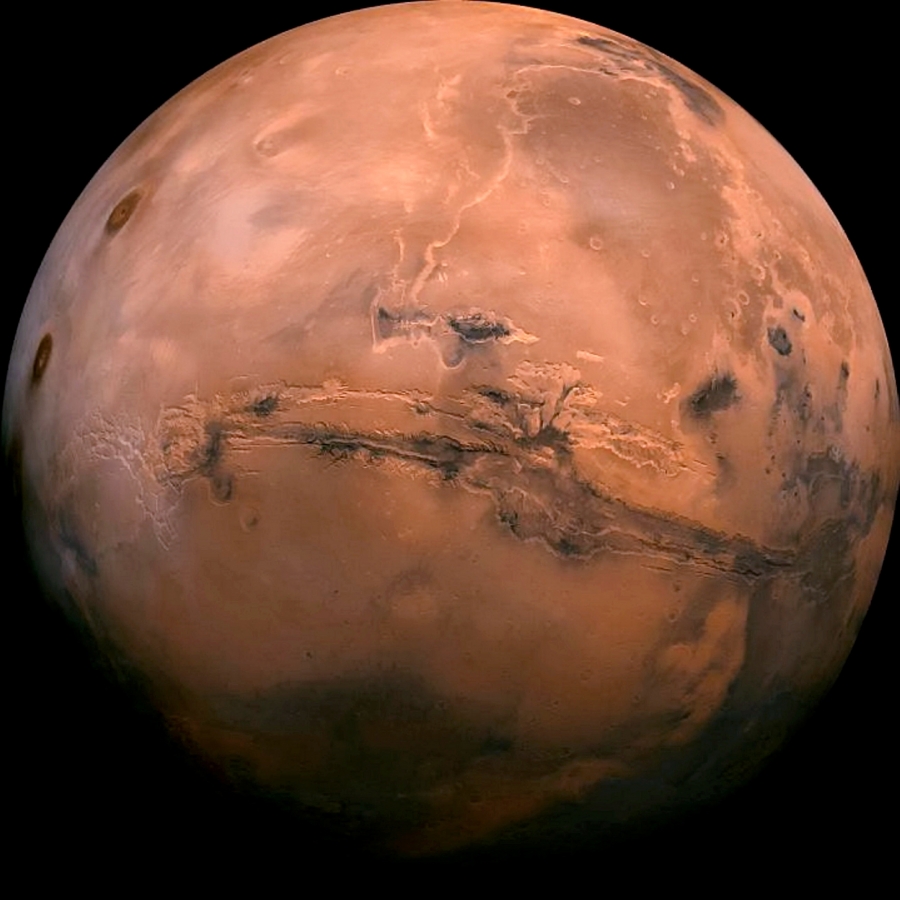 Mars could be made habitable by creating “small islands” – paved with the lightest material on Earth, according to new research.

An inch thick layer of tiles made out of silica aerogel – a fluffy white powder that is mostly air – would be enough to insulate the frozen world.

This would warm the Red Planet’s surface – similar to the way greenhouse gasses do on Earth.

It opens the door to habitation domes with year-round drinking water – or even self-contained biospheres. Humans would be protected against the sun’s harmful rays.

The tiles would be laid in ice-rich temperate regions of the planet. Almost all water on Mars today exists as ice.

The ambitious plan, proposed by a joint US and British team, could be done within the next few decades.

It involves taking a more regional approach – instead of trying to change the whole planet.

Computer models and lab experiments showed a 2 to 3cm-thick shield of silica aerogel could transmit enough visible light for photosynthetic life to develp.

It would block hazardous UV radiation and raise temperatures underneath permanently above water’s melting point – without any need for an internal heat source.

Corresponding author Professor Robin Wordsworth, an engineer at Harvard University in the US, said: “This regional approach to making Mars habitable is much more achievable than global atmospheric modification.

“Unlike the previous ideas to make Mars habitable, this is something that can be developed and tested systematically with materials and technology we already have.”

Silica is a cheap mineral made up of silicon and oxygen – two of the most common elements on the planet. It has already been used to protect the Mars rovers.

Co-author Dr Laura Kerber, of NASA’s Jet Propulsion Laboratory in California, said: “Mars is the most habitable planet in our Solar System besides Earth.

“But it remains a hostile world for many kinds of life. A system for creating small islands of habitability would allow us to transform Mars in a controlled and scalable way.”

Current conditions on Mars are too hostile for terrestrial life. It is too cold to maintain water and there is no ozone layer to shield against UV radiation.

Sci-fi writers have long dreamed of turning it into a more Earth-like planet for future colonisation.

But last year a NASA study discovered processing all the sources available on Mars would only increase atmospheric pressure to about 7 percent of Earth’s.

This is far short of what is needed to make the planet habitable. The process, called terraforming, involves thickening its atmosphere and increasing its temperature.

The researchers, working with astrobiologist Prof Charles Cockell at Edinburgh University, believe they have come up with the solution.

Current conditions on Mars are too hostile for terrestrial life. It is too cold to maintain water and there is no ozone layer to shield against UV radiation.

It would increase the temperature of the underlying fine Martian soil – or regolith – by 50 °C, reports Nature Astronomy.

This is what is required to raise annual average low to mid-latitude temperatures to above the melting point of liquid water.

Speaking from the US, Prof Wordsworth said: “Doing anything on Mars is difficult, but our proposed approach is much more achievable than globally modifying the atmosphere.

“It could feasibly be done in a few decades – if we decide we want to do it.”

Silica aerogels are over 97 per cent air by volume and have some of the lowest measured thermal conductivities of any known material, he explained.

They are already used in buildings on Earth – and in the Mars Exploration Rovers where thin layers provide night-time thermal insulation.

The researchers were inspired by a phenomenon that already occurs on Mars. Unlike Earth’s polar ice caps, which are made of frozen water, polar ice caps on Mars are a combination of water ice and frozen CO2.

This allows sunlight to penetrate while trapping heat. In the summer, this greenhouse effect creates pockets of warming under the ice.

Prof Wordsworth said: “We started thinking about this solid-state greenhouse effect and how it could be invoked for creating habitable environments on Mars in the future.

“We started thinking about what kind of materials could minimise thermal conductivity but still transmit as much light as possible.”

The researchers landed on silica aerogel, one of the most insulating materials ever created.

Dr Kerber said: “Silica aerogel is a promising material because its effect is passive. It wouldn’t require large amounts of energy or maintenance of moving parts to keep an area warm over long periods of time.”

In tests that mimicked the Martian surface silica aerogel tiles were placed on a low-reflectivity base surrounded by thermally insulating material.

The apparatus was exposed to visible radiation from a solar simulator. The temperature was then recorded.

A climate model of the Red Planet then confirmed silica aerogel in ice-rich temperate regions could keep the water liquid up to a depth of several metres.

This would last throughout the Martian year. In addition, silica aerogels transmit visible light while absorbing it at UV wavelengths.

This would blanket the planet’s environment – while still allowing enough light for photosynthesis.

Prof Wordsworth said: “Spread across a large enough area, you wouldn’t need any other technology or physics, you would just need a layer of this stuff on the surface and underneath you would have permanent liquid water.”

He added: “There’s a whole host of fascinating engineering questions that emerge from this.”

The team is already planning to test the material in Mars-like climates on Earth – such as the dry valleys of Antarctica or Chile.

But any discussion about making Mars habitable raises important philosophical and ethical questions about planetary protection.

Prof Wordsworth added: “If you’re going to enable life on the Martian surface, are you sure that there’s not life there already?

“If there is, how do we navigate that. The moment we decide to commit to having humans on Mars, these questions are inevitable.”

Silica has a sponge like structure yet can support up to 4,000 times its weight. It’s used in a range of products – from carpets and cosmetics to roofs and wetsuits.

Donald Trump has said NASA will send the first manned mission to Mars by 2033.