It is only the second interstellar object to be discovered - coming hot on the heels of the cigar shaped Oumuamua. 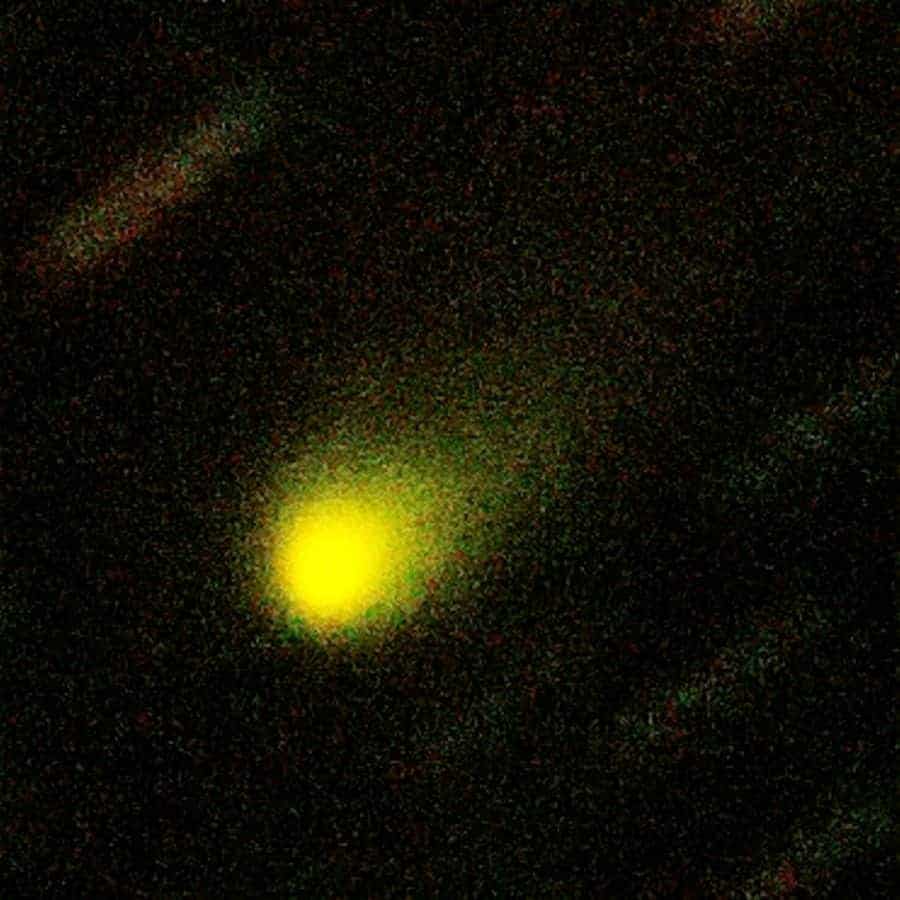 A comet from outer space is hurtling towards us, say scientists.

It’s only the second interstellar object to be detected in the solar system – coming hot on the heels of the cigar-shaped Oumuamua.

That one was heading out when it was discovered two years ago. This giant rock is coming in – at around 72,000 mph.

That’s 42 times the speed of a bullet – and twice as fast as the asteroid that killed the dinosaurs.

It has been named 21/Borisov after Ukrainian amateur astronomer Gennady Borisov who spotted it.

The 57 year-old engineer was stargazing before dawn on August 30 this year when he stumbled upon the alien visitor.

Now the first detailed analysis by international experts has found it’s roughly a mile and a quarter wide (2km) – and travelling at about 20 miles per second.

It’s tail and coma – the clouds of vaporised ice and dust that act like rocket fuel as it nears the sun – have a reddish hue.

Comet tails can reach almost 100 million miles long – but chunky 21/Borisov’s is “broad and short,” according to the study published in Nature Astronomy.

Co-author Ines Pastor-Marazuela, a PhD student at the University of Amsterdam, said: “This discovery is important because it’s only the second body ever detected to come from outside of our solar system – and the first one to be a comet.

“The first interstellar body, Oumuamua, was an asteroid. Since its orbit is very inclined with respect to the plane in which the planets rotate, it will not get very close to us.”

Interstellar objects are believed to pass through the solar system in great numbers. But they are usually too faint to be noticed.

That’s why Oumuamua triggered such a frenzy of excitement – even alerting SETI (Search for Extra Terrestrial Intelligence).

Its strange, elongated shape led some to suspect it was a spaceship.

It later turned out to be an asteroid – due to the absence of a coma.  Since they are not made of frozen gases, they don’t form bright clouds and tails.

Study co-leader Dr Michal Drahus, of Jagiellonian University in Krakow, Poland, said: “We immediately noticed the familiar coma and tail that were not seen around Oumuamua.

“This is really cool because it means our new visitor is one of these mythical and never-before-seen ‘real’ interstellar comets.”

The findings are based on images taken by the William Herschel and Gemini North telescopes on La Palma in the Canary Islands and Hawaii, respectively.

The comet has a very open, ‘hyperbolic’ orbit – a wide arc that approaches from one direction and departs in another.

This marks 21/Borisov as just passing through. Objects born in our solar system are trapped in elliptical orbits around the sun that resemble squashed circles. But it’s colour and shape is similar.

On 8 December it will get within 186 million miles of the sun – twice as far away as the Earth.

Ms Pastor-Marazuela said: “After that it will keep travelling away from us – to never come back again.

“This gives us almost one year to observe it before it becomes invisible, and learn about how small bodies form and evolve outside of our solar system.”

The comet could shed light on worlds in other solar systems – known as exoplanets – and the search for extra-terrestrial life.

Finding out where it came from by retracing its steps through its trajectory would be the holy grail of comet research.

Co-lead author Dr Piotr Guzik, also of Jagiellonian University, said: “The overall visibility will be gradually improving. The body is destined for an intensive observing campaign lasting many months.

“That will allow us to gain groundbreaking insights into the physical properties of interstellar comets and exo-solar planetary systems in general.

“We can safely say research on this body will be transformative for planetary astronomy and a milestone for astronomy in general.”

It will be easiest to spot during December and January, but will remain observable until later in 2020.

Dr Guzik said: “The nucleus is probably about 1 km (0.62 miles) in radius, a common value among solar system comets.

“Based on these early characteristics, and putting its hyperbolic orbit aside, 2I/Borisov appears indistinguishable from our native comets.”

The rapidly approaching space rock has been officially confirmed as an interstellar comet by the International Astronomical Union.

Co-author Dr Waclaw Waniak, also of Jagiellonian University, said: “The comet is still emerging from the Sun’s morning glare and growing in brightness.

“It will be observable for several months – which makes us believe the best is yet to come.”

It was named 21/Borisov in the tradition of recognising comet discoverers. The ‘2’ and the ‘1’ stand for ‘second’ and ‘interstellar’, respectively.

The 28 feet wide machine has the biggest digital camera ever built. It is set to map the entire visible sky.

Added Dr Guzik: “As 2I/Borisov was discovered on its approach towards the Sun, and is brighter than Oumuamua, astronomers will be able to acquire a more extensive, complete and precise set of data before the comet becomes too faint to observe in approximately a year from now.”