A petition calling for Theresa May to revoke Article 50 has picked up more than 500,000 signatures in the past 24 hours following a night of political chaos in Westminster. The Prime Minister took aim at her fellow MPs last night, saying they are responsible for the impasse over Brexit. Holding her nerve once again […] 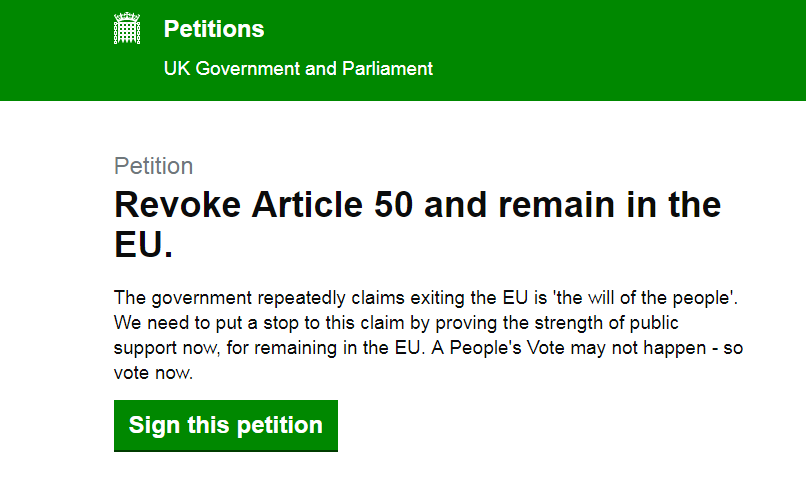 A petition calling for Theresa May to revoke Article 50 has picked up more than 500,000 signatures in the past 24 hours following a night of political chaos in Westminster.

The Prime Minister took aim at her fellow MPs last night, saying they are responsible for the impasse over Brexit.

Holding her nerve once again she confirmed that there would not be a change of course and that she would “work night and day” to persuade MPs to vote for the unpopular Withdrawal Deal she has secured.

But moments after the speech was delivered a petition set up by Margaret Anne Georgiadou went viral online.

This morning well over half a million people had put their signatures to it, with many suggesting a million is well within sight.

Petitions which reach 100,000 signatures are almost always debated, but this is unlikely to occur before the UK’s exit, currently timed for 11pm on 29 March.

However with hundreds of thousands of people expected to march in the capital this weekend it could add to the significant pressure being faced by the government to revoke the exit clause.

At the time of writing 589,000 people have signed the petition, with the million signature mark likely to be hit before midday.

Update: the petition is already at over 640,000 and occasionally crashing due to the amount of people signing: https://petition.parliament.uk/petitions/241584