And after discovering the shock listing, residents have accused the trustees of greed and fear their 'little piece of timeless paradise' is being broken up for nothing more than profit. 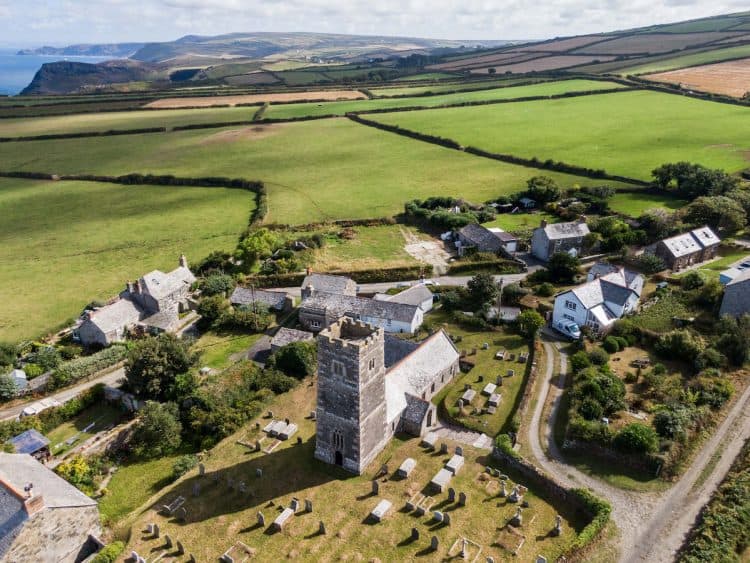 Residents facing eviction from one of the final coastal communities untouched by second homes have vowed to win the ‘Battle of Trevalga’ – and do ‘whatever it takes’ to stop its sale.

The manor of the historic coastal parish of Trevalga in Cornwall is home to just six let farms and 17 other homes.

Trustees have engaged Savills to sell it off for a guide price of £15.75m – leaving the future of those who have lived there for decades uncertain.

But a row has broken out as those living there claim the sale is in breach of the wishes of its former owner Gerald Curgenven, who left it in his will to Marlborough College in 1959 with the instruction to ‘preserve it’ and not break it up.

And after discovering the shock listing, residents have accused the trustees of greed and fear their ‘little piece of timeless paradise’ is being broken up for nothing more than profit.

They described Trevalga as a “unique place in Britain that has been left largely untouched by the modern world.”

It also doesn’t suffer from any light pollution and has escaped the invasion of second home owners and holiday lets throughout the rest of Cornwall.

And campaign coordinator Serena Patrick, 38, said locals were fighting for more than just their own homes.

She added: “It has not been developed, because of how Gerald Curgenven managed it in his lifetime.

“And after his death in 1959 it has been almost completely sheltered from the rise of modernism and development that has swept the entire country.

“It is a medieval parish that is largely unchanged – and a living piece of shared history.

“With no street lighting, you can stand in almost complete silence. It is unique. What he tried to do was ensure homes for local people in a beautiful and historic area.

“So what is the point in writing a will if when you die you can just say my wishes don’t matter?

“The trust created to preserve Trevalga has, in our view, now been twisted into a tool to exploit it for nothing more than monetary gain.”

The 1,200-acre estate, which is situated between the villages of Boscastle and Tintagel, includes all the tenanted properties, a mile of coastline and a few small rocky islands.

Currently, houses are rented to locals at reasonable rates, but Savills said in its marketing material new owners may want to pursue the “redevelopment” and “further income generation.”

Curgenven, Lord of The Manor, as his headstone reads, left the entire estate – which he first purchased for £14,000 in 1934 – in a will trust to Marlborough College upon his death. The trust was created so the estate could be preserved and improved “and as far as possible not sold or broken up”.

More than 3,000 people have now signed a petition to try and block the sale.

Ms Patrick said the campaign’s main aim was to have the charitable objectives on the register of the charity commission amended to reflect the intentions of Curgenven to ‘preserve the manor.’

She said they had even sought legal advice and a legal letter had been sent to the commission.

She added: “The sale as we are aware is still on. We are very opposed to it and I understand from our MP Trevalga has now been raised with the secretary of state.

“It has been called in to the charity commission as we have lots of questions about the management of the estate.

“A legal letter has also been sent to the charity commission on our behalf – outlining why the residents are concerned.

“We are a united community. Whether that is part of the manor or tenanted or private residents – we are all united in wanting to halt this sale – to honour the wishes and preserve the manor of Trevalga.

“The reasoning behind the creation of the trust was not to generate income but to preserve the manor or Trevalga. We all want to have these wishes honoured.

“We don’t know what the next stages will be. We all have our personal motivations but on a wider level we need to preserve Trevalga as it is unique. It is very rare in Cornwall in having no second homes or holiday lets.

“Now the way we have progressed, with 21,000 on the waiting list in Cornwall, which has doubled in three years, I would now say we are unique. People here are not wealthy but are able to live in very nice homes.

“This is not just about saving it for us who live here – but is a gift to the nation a small piece of shared history preserved.”

Ms Patrick said they were exploring “all avenues” and will do “whatever it takes” to halt the sale and resist eviction.

And she added: “I am confident we will win. As we have right on our side. People across the world are rallying with Trevalga. It is a magical place and I believe the magic will win out.

“I just hope the charity commission, upon reviewing what is presented to them, move to take action and the charitable actions are amended.

“I would hope this can be stopped without this ever going to court, but we are gearing up for the long term and will do whatever is necessary.”

Peter Pracownik, 70, who has lived at Trevalga Manor for the last 26 years is among those fearing eviction alongside his wife Nicola Lydon, 44, and his two sons.

He added: “We were assured that according to the will it would never be broken up or sold. We love it here and were told we’d be here forever as long as we paid the rent.

“I just think it’s being used as a cash cow. Someone is looking to make money out of it.

“We thought we were living in our forever home. I’ve brought my children up here and I work from here as an artist in my studio. It is where I live and work. For me to have to move at my age is going to be so expensive. We haven’t got that sort of money. To find anywhere else in Cornwall is ridiculous. The amount of second homes has killed it.”

Peter says his home was even used on advertising materials to sell the whole village.

He added: “It is such a beautiful place and it is because no one owns it. The people are part of it all and want to stay forever. Who is going to get the money for the sale? Certainly not the people who live here.

“Something is not right but we believe we have the law on our side. I just want to stay here and carry on as I have the last 26 years.

She said: “We need to get the bottom of what is happening and stop it.

“No-one wants it to change. It is hard times at the moment but it is important we pull together as a village.

“I don’t understand how this has happened so quickly. It has caused a lot of unhappiness and consternation. The whole parish is fighting back as we can’t let this happen.

“I came in 1988 and we have been here more than 30 years. I was led to believe it was for life. This was not what was intended in the will at all and I can’t see how it can be allowed to go ahead.

“The uncertainty is definitely of concern though and causing a lot of anxiety.”

“This has touched everyone’s life in the parish. We need to protect the village and stop it being ruined by developers.

“We are a very strong community and all support each other.”

Kizzy Lockyear, 44, lives there with her two sons and is a full time carer.

She said: “I came here when I was six months old and have lived here ever since.

“It is all I’ve ever known. It is just a different way of life, a real community where everyone knows each other.

“It would be massive upheaval to leave – and I am fearful that might happen.

“It all just feels so wrong. I considered a newcomer despite being here for 44 years – that’s the type of place it is. The campaign is getting a lot of support but underlying all of that is the feeling you never know how it will turn out. Not knowing is causing a lot of fear and uncertainty.”

Trustees claimed they can now sell the estate to be developed because the trust is subject to the ‘royal lives clause’ tied to George V, who died in 1936.

They claimed the life of the trust is tied to Royal lives, and specifically to the death of George V’s last living descendant.

The trustees said they no longer believe the village’s ownership structure is viable and suggest they would be better off selling it before they claim the royal lives clause is triggered in the coming decades.

The campaign to save it has won the support of MP Scott Mann, who has appealed to the Charity Commission on its behalf and organised a meeting between the watchdog and trustees next month.

He said: “This is a one-of-a-kind community and it does deserve some protection. We have significant challenges with housing in Cornwall anyway with the buy-to-let market and Airbnbs and we’re doing everything we can.”

In a statement, the trustees said: “The local MP Scott Mann has shown interest in Trevalga and facilitated a meeting between the trustees and representatives of the Charity Commission. Any further statement prior to that meeting would be inappropriate.

“We have significant challenges with housing in Cornwall anyway with the buy-to-let market and Airbnbs.”