"It's not like we're some extremist zealots," its leader has insisted. 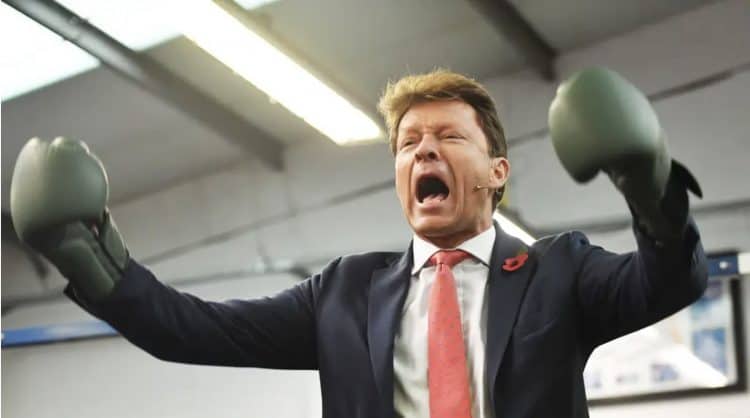 The relaunched Brexit Party has been announced its bank account is being shut down.

The party is now known as Reform UK, and it campaigns against Covid-19 restrictions.

On 27 July Metro Bank gave it a two-month notice that they are unable to continue acting as their bankers, The Telegraph has reported.

Leader Richard Tice, who launched the party with Nigel Farage, lashed out at the “grim” and “outrageous” decision and said it was “based on politics”.

But the bank said the reason is that the account was not “commercially viable” and claimed it was “politically neutral”.

The party may now be unable to operate because it cannot pay bills without a bank account.

It comes after the Brexit Party was refused by four high street banks when it was set up in 2018.

“We are fifth in the polls. It’s not like we’re some extremist zealots. We got 300,000 votes in the May elections,” Tice told The Telegraph.

He added: “Millions of pounds passes through that account. Give or take, about £750,000 of party expenditure has probably gone through the account over the last seven to nine months so the idea it’s not a commercially viable account…

“I should think they’ve got tens of thousands of accounts that have seen less activity than our account.

In June this year, Reform UK announced it would not stand a candidate in the Batley and Spen by-election in a bid to boost the Conservative Party’s chances of taking the Labour-held seat.

Tice said at the time that the party did not want to  “split the vote and reduce chances of Labour being ousted.”

He said: “While we do not support this government, particularly with its approach to lockdowns, the Northern Ireland Protocol and its new globalist tax agenda, a Tory win would lead to an early election, possibly next year and hopefully the final nail in Labour’s coffin.”

Reform UK also chose not to stand a candidate in Hartlepool, where it had secured a quarter of the vote in 2019 when Nigel Farage led the outfit under its former name, a move that was seen to boost Boris Johnson’s party.

The party contested 275 seats and took two per cent of votes but did not succeed in electing an MP in the 2019 general election.

“We are showing the courage needed to take on consensus thinking and vested interests on Covid. But there are so many areas of public life that can be improved to benefit ordinary people. That is why we will campaign for Reform,” Farage said last year.