"Another one who makes much of his 'Christianity'", James O'Brien said. 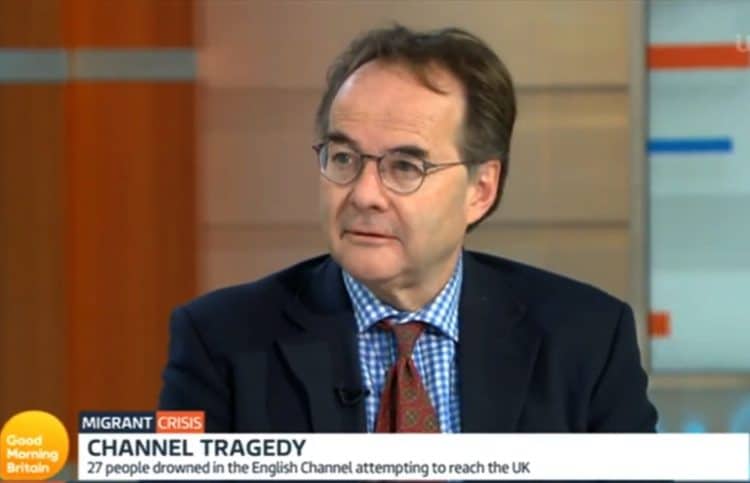 Quentin Letts has been widely criticised after he claimed migrants coming into the UK in small boats via the English Channel were “coming with just expectation” of receiving a job and benefits.

In a debate on Good Morning Britain, The Times’ political sketch writer suggested Britain was “regarded as a soft touch” in terms of its immigration enforcement.

After it was suggested by presenter Ben Shephard people enter the UK “with just cause”, Letts replied: “They’re coming with just expectation.

“They’re coming here thinking ‘I can get a job, I can get some benefits’”.

Church leaders have pushed for a “better system” for migrants after a capsized dinghy tragedy in the English Channel left dozens of people dead.

The Archbishop of Canterbury, Justin Welby, described the deaths of at least 27 migrants off the coast of France as a “devastating loss of human life”.

“Praying for all those suffering agonising grief today,” he said on social media.

“We need a better system based on safety, compassion, justice and co-operation across frontiers. This cannot go on.”

Cardinal Vincent Nichols, the Archbishop of Westminster and leader of Catholics in England and Wales, called it a “terrible loss” that should invoke a “tragic summons to action”.

“Everyone is a child of God”

Posting on Twitter, he added: “This event illustrates graphically both the ruthless evil of the traffickers and the desperation of those trying to escape poverty, conflict or persecution in search of a better life.

“Every one is a child of God, with an innate dignity and worth.

“Focused international co-operation, safe routes to sanctuary and joint efforts to tackle poverty are all needed in the face of a global flood of desperate humanity.”

The Bishop of Dover, Rose Hudson-Wilkin – whose diocese is a popular arrival spot for migrant boats – has spoken about her “rage” after Wednesday’s tragic event and called for the issue of migration to stop being used as a “political football”.

The former chaplain to the Speaker of the House of Commons told BBC Radio Kent: “I am feeling a deep inner rage that the world continues to allow this to happen, couched with political rhetoric as to whose fault it is.

“This is all our fault, we must all take responsibility.”