“It’s like we’re the pioneers of this new luxury travel vaccine programme," the group's founder boasted. 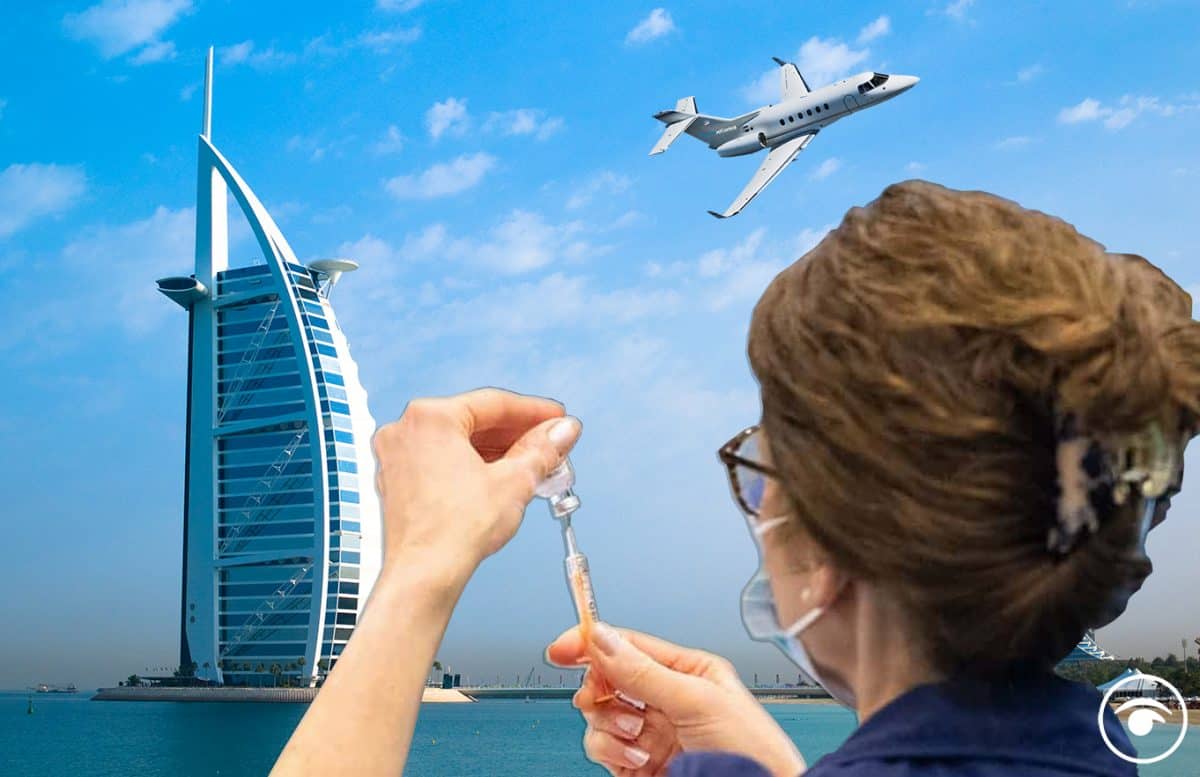 Mega-rich Brits are skipping the queue for a coronavirus vaccine by jetting abroad to get jabs done privately, with the owner of an exclusive members club offering the service claiming he is responsible for “lives saved” by doing so.

Dubai and Abu Dhabi are offering private appointments for the Pfizer/BioNTech vaccine – and 20 per cent of the club’s membership have reportedly chosen to fly out and get it.

Now, with the rollout of the Oxford/AstraZeneca vaccine in India for as little as £10 per jab to private customers, Knighstbridge Circle is reportedly expanding its service to the subcontinent.

Stuart McNeil, the club’s founder, told the Telegraph he was “proud” to help his wealthy clients skip the line: “It’s like we’re the pioneers of this new luxury travel vaccine programme. You go for a few weeks to a villa in the sunshine, get your jabs and your certificate and you’re ready to go.

Adding that most clients had flown out to the UAE – which was recently removed from the Government’s list of quarantine-exempt countries – McNeil said: “We book [our members] into a beautiful villa with a swimming pool, chef and household staff. They land, have their first jab and wait for the second one.

“We’ve got some people that are going to India for the whole time and others are talking about flying in, having the first jab, flying out to Madagascar, and then coming back for the second jab later.

“We’ve been vaccinating over the last couple of weeks in the UAE, using Pfizer and Sinopharm, which require a 21-day gap between shots. We can start administering the AstraZeneca vaccine today in India.

“I am talking to doctors who are potentially going to set up clinics in Marrakech and have the AstraZeneca vaccine transferred from India to there-because India is difficult visa-wise for the UK.”

Although the service carries an estimated cost of around £40,000 for a month-long trip to Dubai – including first-class flights and luxury accommodation alongside the vaccine – McNeil stressed that Knightsbridge Circle only helped “people that really need it”.

“We still have a moral responsibility to make sure that people that really need it get it, and that’s what we’ve been focussing on,” he said. “It’s not just been our members, but their parents and their grandparents as well.”

As for the ethics of jumping the queue, McNeil seems unconcerned. “I feel that everybody who has access to private [healthcare should be able to be vaccinated]-as long as we offer it to the right people. My team is in India and the UAE to make sure that the person who has requested it is the person that receives it. It’s lives saved.”

McNeil – who has a private Harley Street clinic – urged Boris Johnson to loosen the grip of the NHS on vaccine distribution.

“I’m really keeping my fingers crossed that Boris allows us to do this,” he said. “But the UK government doesn’t fill me with confidence-especially now that they’ve said they might not have enough shots to do the second round of Pfizer. Being realistic, I’m saying to our members that they might be waiting a while and may want to consider flying to a different destination.

“It’s a shame because a friend of mine who works for the NHS tells me that a lot of people aren’t turning up. If somebody doesn’t show up, there should be a private list of people to say, ‘can you get here in one hour?’ Because people are desperate to have it.”

Related: JVT: Vaccines will work against mutant Covid strains for ‘many months’