The manifesto notes that there has been a “grotesque scale of the unfairness” in the region. 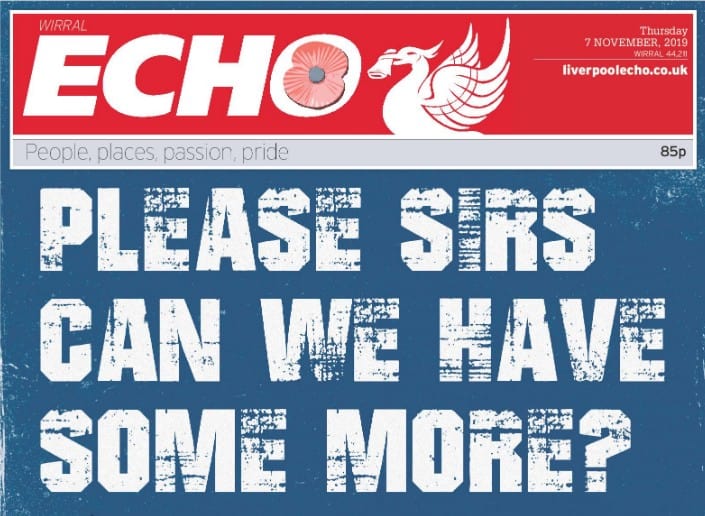 At least ten regional newspapers in the north have teamed up to present an election ‘manifesto’ ahead of next month’s general election.

Liverpool Echo, Manchester Evening News, Yorkshire Post and Sunderland Echo were among the titles to splash the vision today, calling for an end to economic neglect of the region.

The manifesto was drawn up by business and political leaders at the Convention of the North event in September and presents five key points to leaders of the Conservative, Labour and Liberal Democrat parties.

They include the local control of education and training, a formal commitment from the Treasury to rebalance the economy between the north and south, an improved transport budget, freedom to lead export growth with greater investment, and the backing to lead the green industrial revolution.

A report in the Yorkshire Post notes that there has been a “grotesque scale of the unfairness” in the region.

“On transport alone, the North has missed out on £63bn of funding compared to London over the past decade.

“This is utterly unacceptable, and amounts to treating northern businesses and commuters who rely on the transport system as inferior to their counterparts in the capital.”

It comes as Labour announced a £150 billion fund based in the north to fix the “human emergency” under the Tories.

John McDonnell is set to unveil a Social Transformation Fund to “upgrade and expand our schools, hospitals, care homes and council houses” over five years.

He will pledge “an irreversible shift in the centre of gravity” in politics from London to the north and regions, spending money on making homes more energy efficient, offshore wind farms and Crossrail for the North.

The Conservatives, on the other hand, have targeted the “Workington Man” as the key to winning an overall majority in next month’s election.

According to the party the Workington man is an older, white, non-graduate man from the north of England with an interest in rugby league and a tendency to vote Labour.

Locals have hit back at the stereotype, saying “It’s a cliche that belongs in the 1970s.”