A post on Australian gun control is going viral following the tragic shootings in Las Vegas. The Facebook picture refers to a mass shooting in 1996 which prompted politicians to introduce sweeping gun control measures. The government bought back and destroyed over 1 million guns and put in controls over who can purchase firearms, which […]

A post on Australian gun control is going viral following the tragic shootings in Las Vegas.

The Facebook picture refers to a mass shooting in 1996 which prompted politicians to introduce sweeping gun control measures.

The government bought back and destroyed over 1 million guns and put in controls over who can purchase firearms, which has eradicated mass shootings in the country.

It has also barely inflicted its citizen’s rights to own arms.

Only full and semi automatic guns are banned in Australia, and residents still have access to firearms if they prove they are mentally stable to own one. 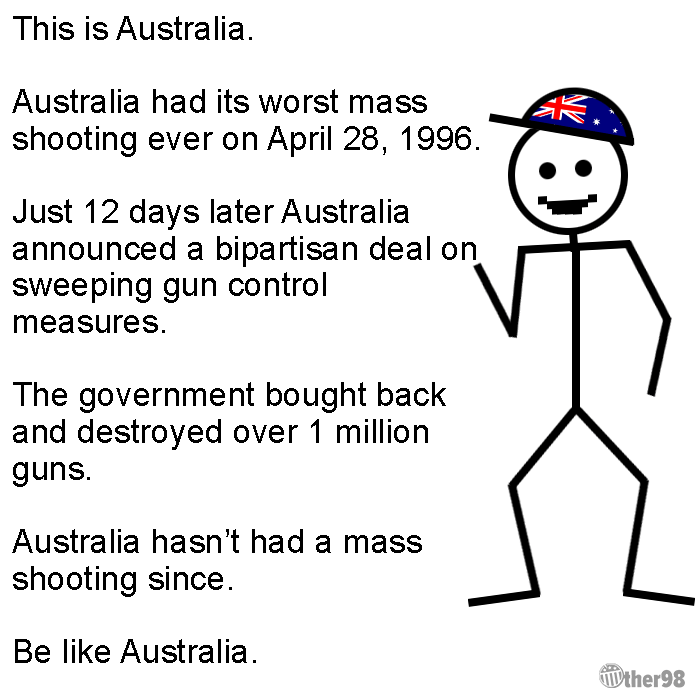 The acting US ambassador to Australia has praised former prime minister John Howard for tightening Australia’s gun laws, and pointed out their effectiveness in reducing mass shootings, in the wake of Monday night’s carnage in Las Vegas.

Speaking in Sydney on Tuesday morning, Charges d’affaires Jim Carouso said the murder of at least 59 people – the US’s worst mass shooting – would kickstart another round of debate about US firearm control but pointedly drew a contrast with Australia’s success in stopping gun violence.

He said: “When Prime Minister Howard after the Port Arthur massacre made the political decision that this must not stand, he took incredible flak. He had to wear body armour is my understanding, for months after that. But he carried it through.

“It’s a very, very difficult problem that we’ve been wrestling with for years and years … Every time one of these things happens, US analysts always point to what happened in Australia and point out that your murder rate with guns has gone down drastically. You haven’t had a repeat of this sort of mass murder other than the Lindt Cafe event.

“So I think certainly a lot of observers in the US look to the Australian example.”