A fresh wave of action by the group is planned this month - and the police is worried. 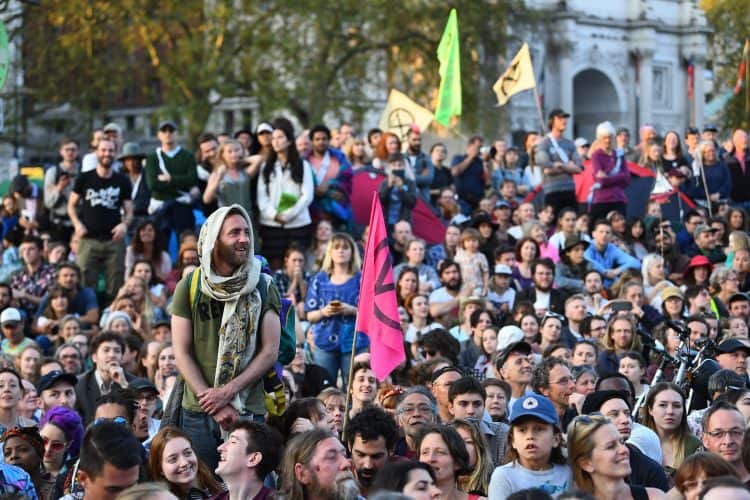 Policing Extinction Rebellion protests has cost the taxpayer more than £50 million since 2019 – and this figure is expected to rise by millions with fresh action planned in the coming weeks.

Commander Rachel Williams told a press briefing the figure covers the Metropolitan Police’s response to three prolonged demonstrations in which activists camped in the streets in April and October 2019 and September 2020.

The environmental group is due to stage a similar occupation in central London for two weeks from 23 August, with its main aim this year being to demand the Government halts all new investment in fossil fuels.

“I’m in no doubt this year’s policing operation will run into the millions and will result in many police officers sacrificing their time off to help mitigate any disruption and bring order and safety to the streets of London.”

Extinction Rebellion activist Zoe Blackler said she is anticipating “thousands” of people will join the London protests, with half of participants being “new members” and the number expected to snowball the longer the demonstrations continue.

Blackler said the group had crowd-funded £100,000 in 24 hours, adding that protests may also be staged in cities beyond the capital.

She told PA: “There’s a feeling with the IPCC report and the flooding here, it feels very much as if there’s public anxiety and desire for action and a feeling this is going to manifest in our protests.”

Blackler said the protests would involve “occupations, targeted action and marching” in London and this year the group has an “immediate demand” to “end all new investments in fossil fuels now”.

She said: “We don’t think it’s a particularly controversial demand. With COP26 coming up, it’s insane that the Government isn’t throwing its weight behind making sure that happens.”

Deputy Assistant Commissioner Matt Twist said the Met made an “unprecedented” 3,762 arrests during the previous three demonstrations, bringing 1,938 prosecutions of which 73 per cent resulted in convictions.

He told the briefing on Friday: “The disruption we witnessed in 2019 and 2020 is unacceptable, and we share London’s outrage on the impact that this activism had on their businesses and their communities.”

Commander Twist added that police response will be “proportionate” to the disruption, adding that “every police officer committed to a large demonstration in central London is a police officer abstracted away from their local community”.

He sympathised with activists’ aims but urged them to “consider the consequences” of their actions on the people of London.

“Like many, I understand what drives Extinction Rebellion, particularly in light of some of the major climate events we are seeing with increasing regularity including here in London,” he said.

“We get it. However, I must urge Extinction Rebellion to consider the consequences of their actions and of the direct and indirect effect on the people and communities of London itself.”