It comes as Liz Truss and Rishi Sunak made their final pitches to Tory members at Wembley as the race to replace Boris nears an end. 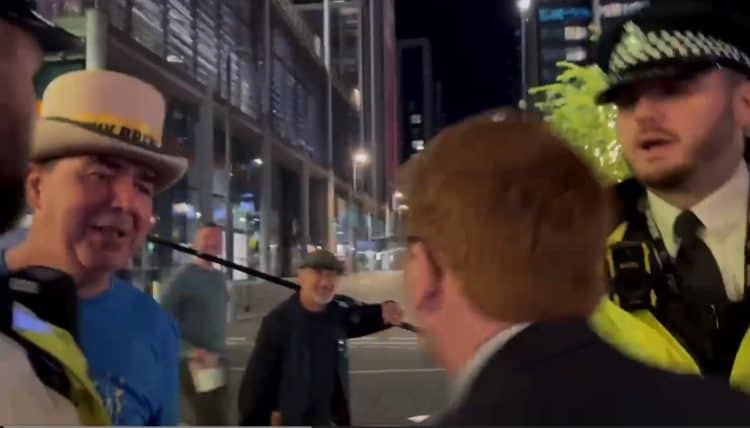 Things got a little heated outside the final Tory leadership hustings in Wembley last night.

‘Stop Brexit’ campaigner Steve Bray was filmed in an altercation with a supposed friend of Michael Gove’s outside the event.

It comes as Liz Truss and Rishi Sunak made their final pitches to Tory members as the contest to replace Boris Johnson enters its final hours.

Frontrunner Ms Truss has claimed there would be no new taxes or energy rationing if she became prime minister, as she dropped further hints about cost-of-living support this winter.

The Foreign Secretary, writing for The Sun, said she is “ready to put my money where my mouth is by cutting taxes” and said her reforms would help “stave off the horror of a recession”.

She added: “I will also deliver immediate support to ensure people are not facing unaffordable fuel bills. I will be robust in my approach. But it isn’t right to announce my entire plan before I have even won the leadership and got my feet under the table.”

Regulator Ofgem has confirmed an 80 per cent rise in the energy price cap, which will mean the average household’s yearly bill will go from £1,971 to £3,549 from October.

Former chancellor Mr Sunak, who has repeatedly acknowledged he is the underdog, said “we shouldn’t rule anything out” on energy rationing.

He also sought to paint himself as the candidate offering a more realistic assessment about the way to approach the economy, with tax cuts not expected immediately if he becomes leader.