A parliamentary inquiry hit out at the police handling of both the Everard vigil and 'Kill the Bill' protests. 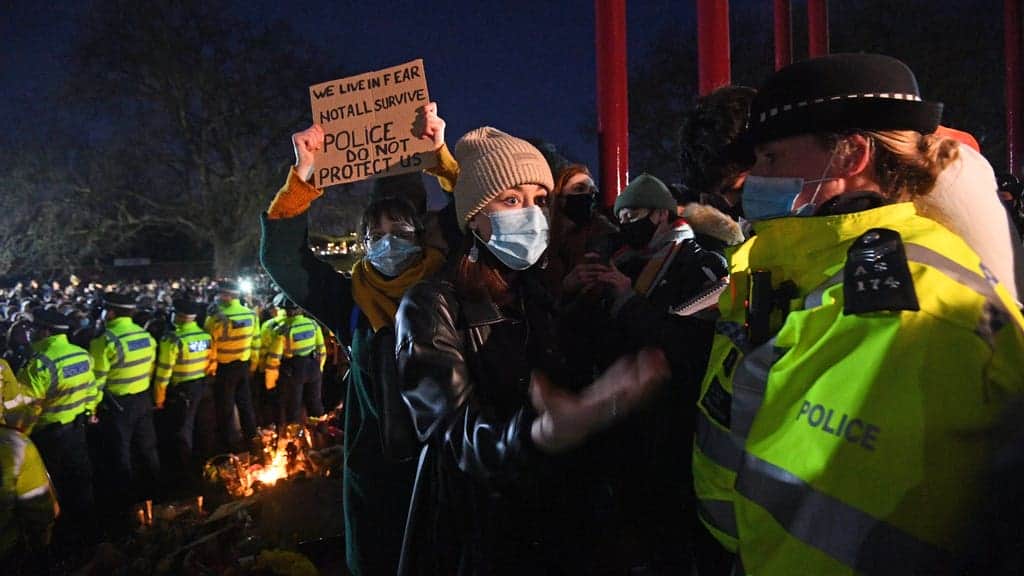 Police breached “fundamental rights” at a vigil for Sarah Everard and “Kill the Bill” protests, a parliamentary inquiry has found.

There were “multiple failings” by the Metropolitan Police and Avon and Somerset Police in the way they handled events at Clapham Common, south-west London, and in Bristol in March, according to the All Party Parliamentary Group on Democracy and the Constitution (APPGDC).

The group of MPs and peers has proposed amendments to the Police, Crime, Sentencing and Courts Bill (PCSC), which is due to be debated on Monday, as a result of the findings.

Inquiry chairman, the Labour MP Geraint Davies, said the right to peaceful protest “must be supported not suppressed by the law”, adding: “The police must not become the enforcement agency of the state against those who choose to publicly and collectively call for change – political, economic, social or environmental.

“Parliament must protect our freedoms and reject attempts to increase police power and restrict our right to peaceful protest. The police should help to facilitate the expression of peaceful protest and not drive opposition underground.”

The report comes after student Patsy Stevenson, who was arrested at the vigil, said she is preparing to start legal action against the Met if it does not withdraw a fine she was issued.

Scotland Yard faced a barrage of criticism, including calls for Commissioner Dame Cressida Dick to resign, after protesters were bundled to the ground and arrested after gathering in memory of 33-year-old Ms Everard, who was killed after disappearing while walking home.

An official report from police watchdog Her Majesty’s Inspectorate of Constabulary and Fire and Rescue Services (HMICFRS) backed the Met’s handling of the event and found no evidence of heavy-handedness.

But it hit out at the force’s “tone deaf” response to criticism of the way it dealt with protesters, saying it should have taken a more conciliatory approach.

The Kill the Bill protest in Bristol – against Government plans to give police sweeping powers to control demonstrations – started peacefully but hours later turned into a riot when around 500 people marched on Bridewell police station, set fire to police vehicles and attacked the building. Later protests also ended with clashes between activists and officers.

Both police forces wrongly applied lockdown laws and their “failure to give transparency and clarity about how they would enforce the regulations in respect of peaceful protest also breached fundamental rights”, according to the parliamentary group’s findings.

The forces “failed to understand their legal duties in respect of protest” and “failed to conduct a proper assessment of the proportionality of their actions”.

– The Met “increased the risk to both officers and civilians” by failing to work with the proposed organisers of the vigil, to facilitate a planned and safe event – which “created the conditions for their later enforcement intervention”. Covid-19 risks were not considered and taking action “may have increased the risk of Covid-19 transmission at the vigil.”

– Avon and Somerset officers “faced real violence but failed to distinguish between those protesting peacefully and those engaged in acts of violence” and used “excessive force against peaceful protestors”.

HMICFRS inspectors were also criticised for appearing not to take into account testimony from people at the vigil in its review – something described as a “significant failing” by the parliamentary group which said made it “impossible” to give the watchdog’s findings “full weight.”

But the report acknowledged police were put in “difficult situations” due to the “ambiguity” of coronavirus rules.

Scrapping new proposed powers to limit the right to peaceful demonstrations has been suggested as an amendment to the Bill, alongside a code for policing protests.

The findings deemed new proposed powers “unnecessary” and found they placed police in an “unfair position” as officers will “be able to decide if protests go ahead and under what conditions”, eroding the “legitimacy of the police as a non-political service”.

The code would place a “duty” on police to facilitate peaceful protest and allow people to bring legal action against forces if breached, the report added.

The Government said public order laws were out of date and the measures proposed in the Bill would “in no way curtail on the right to peaceful protest” but instead allow officers to “better manage demonstrations so that legitimate protest groups can make their voices heard without disrupting the lives and livelihoods of others”.

The HMICFRS rejected the comments made about the watchdog.

A spokeswoman said: “We spoke to several members of the public who attended the vigil, and we interviewed the Reclaim These Streets organisers, police officers, politicians and officials in central and local government. We also reviewed hours of body-worn video from police officers at the vigil and other media.

“We are an independent inspectorate and all of our inspections, like this one, are objective and based on robust evidence.”

In a statement, Avon and Somerset Police said: “We always welcome transparency and accountability but we strongly refute some of the findings of this report relating to the policing of protests in Bristol.

“During the period the report covers, the law was not sufficiently clear as to whether peaceful protest was lawful under Covid-19 regulations and all forces were interpreting them as best as they were able to.

“We reject any suggestion we did not facilitate peaceful demonstrations on the day of the riot and for subsequent protests.

“We made repeated attempts to engage with organisers before each event and in the majority of cases, no-one identified themselves as being in that role.

“When the events took place, on each occasion protesters were provided with ample opportunity to make their voices heard before officers gave clear directions for them to disperse.

“We absolutely recognised their right to peaceful protest but we had to balance the significant risk to public health, taking into consideration the regulations in place at the time, and the rights of the wider public to go about their daily lives without disruption.”

The statement added: “Complaints around disproportionate or excessive force relating to the use of shield strikes have been fully investigated by our Professional Standards Department (PSD) and the complaints have not been upheld and we utterly reject the report’s suggestion that this use of force ‘may amount to criminal offences’.”

Assistant Commissioner Louisa Rolfe, from the Metropolitan Police Service, said: “Following the Sarah Everard vigil on Clapham Common, Her Majesty’s Inspector of Constabulary conducted a thorough review of the policing response, examining in detail the actions of officers both before and during the vigil.

“That report made it clear that police officers acted proportionately and did their very best to peacefully disperse the gathering, demonstrating patience and restraint. HMICFRS also examined the detailed considerations officers gave to the law, specifically the right to protest in the context of the coronavirus regulations which were introduced by Parliament. HMICFRS concluded that officers adopted a lawful approach in their application of the regulations, both before and during the vigil.

“I stand by the actions of those officers who policed the events on Clapham Common. Those officers were met with an extraordinarily challenging circumstance and demonstrated the highest degree of professionalism in their engagement with those gathering. Officers followed national guidance on the policing of the coronavirus regulations, only taking enforcement action as a very last resort.”

Watch: Cassetteboy vs Tories May’22 is a rap battle you have to see