Eddie Catz founder Darren Johnson, 51, filmed hundreds of photos of women's exposed breasts using two "peepholes" at a public toilet at one of his company sites for over 12 years 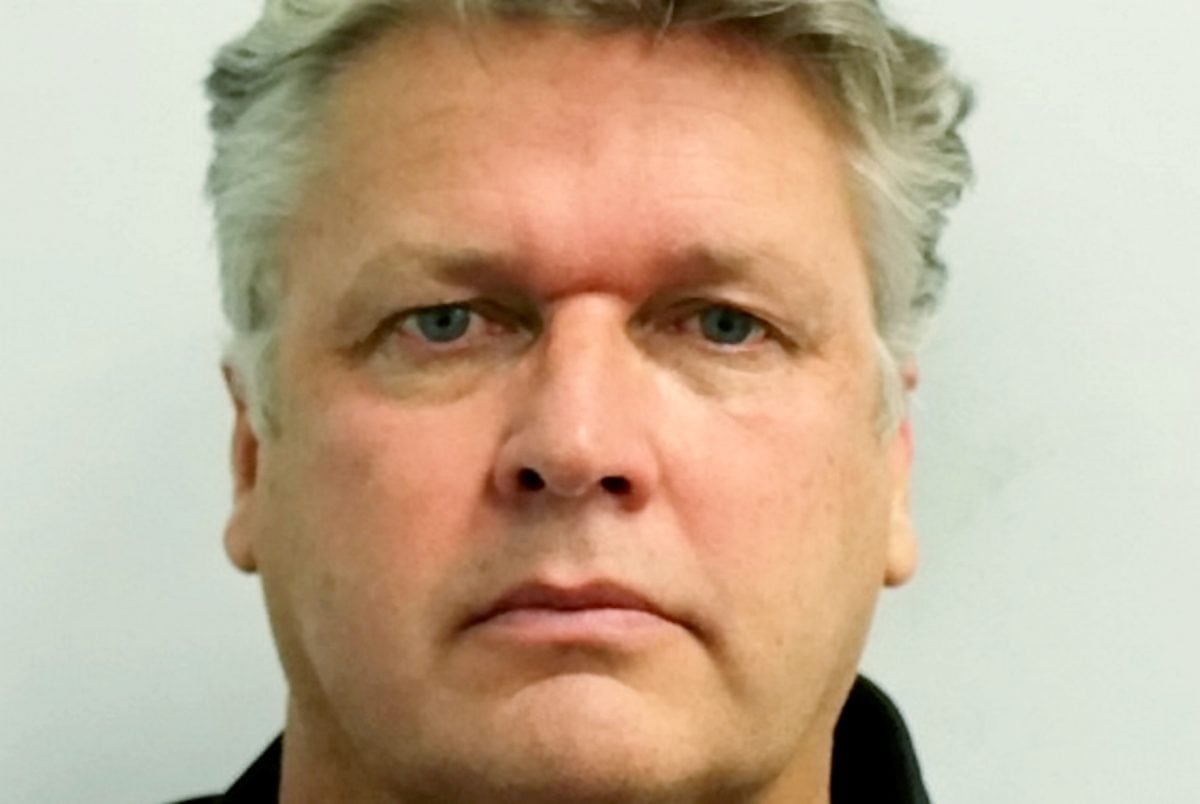 The married founder of a children’s soft play area firm was exposed as a serial ‘Peeping Tom’ after being caught covertly filming schoolgirls getting changing at his local swimming pool.

CCTV captured Eddie Catz founder Darren Johnson, 51, “stalking” two 14-year-old girls from a swimming pool and entering the cubicle next to theirs – before filming them change by poking his mobile phone underneath the partition.

When the company director was arrested, police found hundreds of photos of women’s exposed breasts using two “peepholes” at a public toilet at one of his company sites for over 12 years.

The court heard he took more than 700 indecent cover images of women and children in total after also filming women changing at the leisure centre, using public toilets at an Eddie Catz and of his female employees at his company’s private changing rooms.

The clean-shaven father-of-two appeared for sentencing at Kingston Crown Court wearing a black suit, blue shirt and multi-coloured tie, after pleading guilty to five counts of voyeurism in July.

“The Crown cannot agree that he was not looking to record 14-year-old girls as it’s quite clear from the CCTV.

“There was a 12-year-old that he was following, it’s almost shown very clearly on the CCTV.”

She said the incident at Putney Leisure Centre happened on June 5 last year, and added: “It was on that occasion that two 14-year-old girls he attended their school swimming clubs.

“Mr Johnson, as outlined on the CCTV with the description from the officers, is seen walking around the changing facilities, he goes to the swimming pool, he walks around the centre with no particular purpose, he sees the girls and follows those girls. There’s also a 12-year-old girl, she’s not subject to any count on our indictment.

“They enter a cubicle together and he purposely enters the cubicle next to theirs. The two girls were undressing after swimming club and they saw a iPhone6 which they have identified pointing to them from the adjacent cubicle.

“Mr Johnson was later identified by staff on the CCTV.

“Police attended his home address, and computers were seized. All the images on our counts were located on these computers.”

The court heard 150 files of photos taken at Putney Leisure Centre were found on one of his computers but these could only be a fraction of the indecent covert images he didn’t delete.

“It seems that they only images that were retained so to speak were the explicit ones.”

The court also heard how he drilled holes into two public toilets to take indecent photos of women at an Eddie Catz site in Earlsfield, Surrey.

She said he took images of women at a third toilet at the site by poking his mobile phone underneath partitions between cubicles.

Johnson, of Putney, south west London, also pleaded guilty to taking indecent images of his employees at a private changing room from January 1 2005 to February 8 2012.

But today his defence barrister Tom Williams entered a “basis of plea” saying: “One part of the basis is to make it clear that the conduct in question took place over a few months in 2007.”

The prosecutor said the images could only be dated by the women’s uniforms.

She said: “The prosecution could only infer when those were taken by the different clothing by the employees because the colour of the clothing changed so we are not able to specifically date those images.”

Mr Williams, in mitigation for Johnson, said he had an alcohol problem and had an argument with his wife and was drunk when he filmed the girls at the leisure centre.

He said Johnson admitted the offences at the first opportunity and added: “Since his arrest he has tried to do what he can to turn things around, despite depressions and some suicidal periods.

“This is somebody who does recognise that he has had a serious issue.

“He and his wife have two children, both of them had to receive therapy since all of this came out.

“He accepts what he did was completely wrong and now he has been able to think through in a way that makes some sense he is thoroughly sorry for what he has done.”

Johnson, who has children aged 18 and 20, resigned as director of Eddie Catz last September after the allegations came to light.

His wife Maria Johnson, 51, is still a director at Eddie Catz.

Eddie Catz was approached for a statement following the sentencing today, but has not yet responded.