"The government is not listening to rationality, to common sense, to their own advisors and nobody is holding them to account." 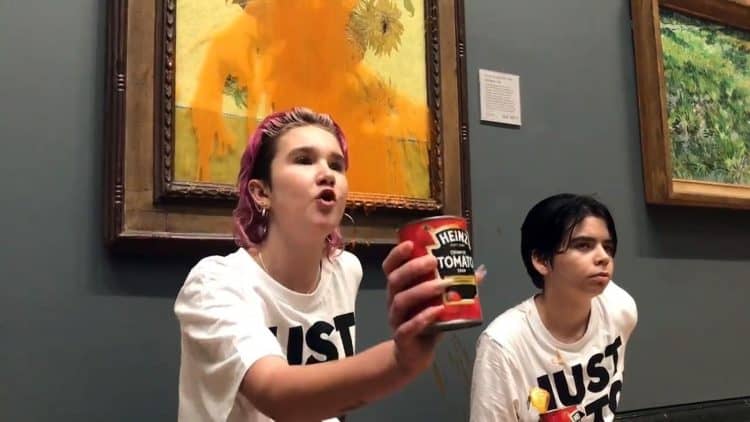 Two climate change activists were arrested on Friday after throwing tinned soup at one of Vincent van Gogh’s most famous paintings to protest against fossil fuels.

The protesters, wearing Just Stop Oil T-shirts, threw two tins of Heinz Tomato soup over the 1888 work Sunflowers before kneeling down in front of the painting and appearing to glue their hands to the wall beneath it.

Tomato soup covered the image, which is covered by glass, as well as parts of the golden frame.

Visitors were then shortly escorted out by security, who then shut the doors to room 43 of the gallery where the painting hangs.

One of the activists, 21-year-old Phoebe Plummer from London, said in front of the painting: “What is worth more, art or life? Is it worth more than food? Worth more than justice?

The protests provoked outrage on social media, with several people questioning why Van Gogh was the target of their ire.

Guardian columnist and political commentator Owen Jones has interviewed the protestors to get their side of the story.

Explaining her intentions, Emma Brown said the protesters will stop as soon as they get a “meaningful statement from the government”, but as things stand they are rowing back on their net zero pledges at a rate of knots.

“They’re not listening to rationality, to common sense, to their own advisors and nobody is holding them to account.

“So that’s why we have young people taking this kind of action.”

Earlier this month Just Stop Oil protesters were reported to have blocked emergency vehicles after staging a demonstration in west London.

Separate videos shared online show both a fire engine and an ambulance on blue lights unable to get through traffic after 32 protesters blocked three roads in Knightsbridge and Brompton Road, stopping traffic in each direction, with some glueing themselves to the asphalt.

Speaking to The London Economic last year, Extinction Rebellion founder Roger Hallam explained why he would be happy to take similar action.