"We're talking about the biggest crime in human history imposed by the rich against the global poor." 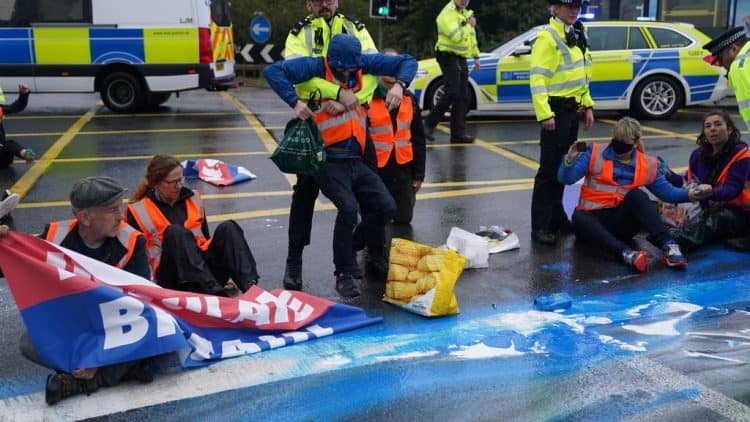 Roger Hallam said he would not have moved for the distressed woman outside Blackwall Tunnel this morning – and he would even block an ambulance in order to get the campaign group’s message across.

Earlier today Insulate Britain protesters clashed with motorists including a woman desperate to see her mother in hospital as the group staged another demonstration in London.

The group said around 50 people had blocked four sites around the capital on Monday morning during the fourth week of its campaign to urge the Government to insulate 29 million homes by 2030.

“How can you be so selfish?”

This included Blackwall Tunnel in east London, where LBC captured the moment a woman stuck in the traffic tearfully clashed with protesters as they blocked her journey to see her mother, who she said was in hospital.

Amid blaring horns from dozens of other angry motorists, she told them: “She’s in the ambulance, she’s going to the hospital in Canterbury, do you think I’m stupid?

“I need to go to the hospital, please let me pass. This isn’t OK … How can you be so selfish?”

“I would stay there”

Speaking to The London Economic podcast, Unbreak the Planet with Mike Galsworthy, Extinction Rebellion founder Roger Hallam said he would have stayed put had he been confronted with the tearful woman.

He also said he would stand in front of an ambulance if there was someone potentially dying inside.

Explaining his rationale on the show, he said: “What we’re talking about is the loss of people’s pensions in the next ten years, the loss of people’s incomes, the mass migration of hundreds of millions of people, the indescribable injustice to people of colour in the global south because of the collective selfishness of people in the north.