As the contest heats up, a Tory source reportedly telling one paper the battle is about to get even “dirtier”. 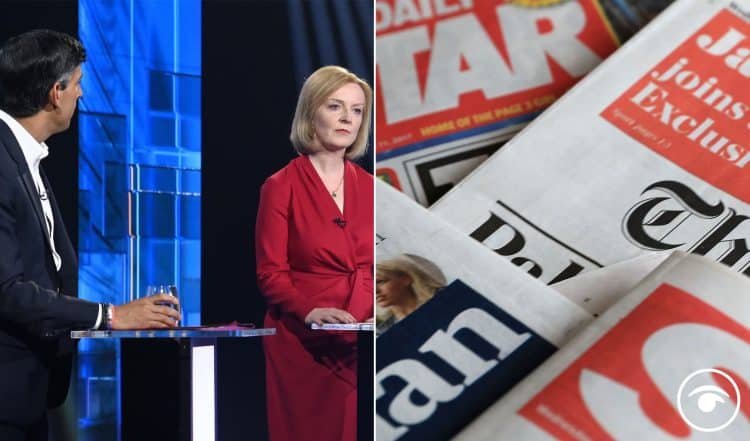 The papers on Thursday revolve around the results from Tory MPs’ final round of voting which saw Penny Mordaunt eliminated and Rishi Sunak and Liz Truss finishing in the top two places.

It comes as Liz Truss criticised Rishi Sunak’s record on taxation and the former chancellor claimed he was the only one who could beat Labour as the leadership contenders turned their focus to winning over Tory members.

The Foreign Secretary vowed to bring in an emergency budget to swiftly axe the national insurance rise if she wins the race to be the next prime minister.

Mr Sunak made his own pitch to win over the Conservative membership who will crown the winner by arguing he could win an election, whereas Ms Truss could not.

“Blue on blue dogfight as Sunak and Truss face off”, The Guardian says as the contest heats up, with a Tory source reportedly telling the paper the battle is about to get even “dirtier”.

The i, Metro, The Daily Telegraph and the Financial Times all write that, according to bookmakers and opinion polls, Ms Truss is the favourite to defeat Mr Sunak, although the latter newspaper notes that the margin is slim.

“A fresh start for Britain?” questions The Independent in relation to the two contenders for PM.

The Times leads with the former chancellor going “on the offensive” and claiming that his rival will be unable to beat Sir Keir Starmer at the next election.

The Daily Mirror, meanwhile, summarises the end to Boris Johnson’s reign and the start to another as: “Out of the lying man & into the dire”.

The Daily Mail splash points to an op-ed by Ms Truss in which she again pledges immediate tax cuts.

The Daily Express bids farewell to Mr Johnson, adding that he delivered a “parting shot” to his former number two by hinting that he intends to make a comeback.

And the Daily Star has the head of Netflix saying that TV “will be dead in 10 years”.