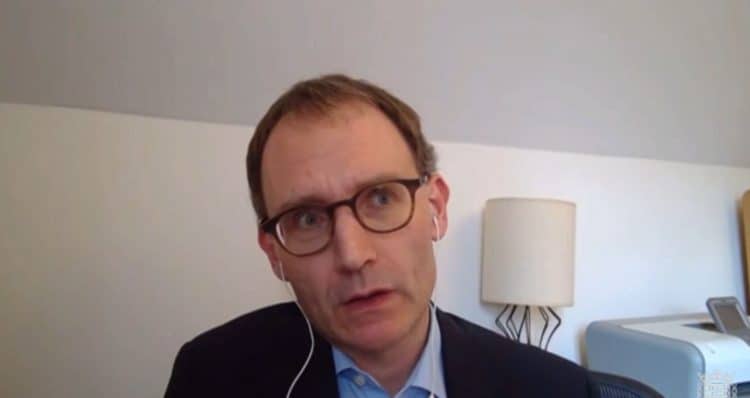 Professor Neil Ferguson, of Imperial College London, speaking by video link to the House of Lords Science and Technology Committee.

Professor Neil Ferguson, the scientist who helped push Britain into its first lockdown, revealed he is “cautiously optimistic” that Omicron infections have plateaued in London – and could start to fall in the next week.

Ferguson, a mathematical epidemiologist from Imperial College London, warned that record case numbers were likely to be an underestimate because of the strain on test supplies.

“So we would expect to see case numbers start to come down in the next week, maybe already coming down in London, but in other regions a week to three weeks.”

He added: “I’m cautiously optimistic that infection rates in London in that key 18 to 50 age group, which has been driving the Omicron epidemic, may possibly have plateaued. It is too early to say whether they’re going down yet.”

Ferguson said that hospitalisation data was proving that vaccinations were effective at preventing severe disease.

He said: “Vaccination is holding up in terms of protection against severe disease, assisted by the fact that Omicron almost certainly is substantially less severe, but it still puts pressures on the health system.

“Omicron is substantially less severe. And that has helped us undoubtedly. We would be seeing much higher case numbers in hospital otherwise. And vaccines are holding up against severe disease and against severe outcomes well, but that doesn’t mean it’s not going to be difficult few weeks for the NHS.”

And public services are resorting to emergency plans to mitigate staff shortages caused by the Omicron variant of coronavirus.

At least six hospital trusts have declared critical incidents – where priority services may be under threat.

Boris Johnson said on Monday that he would “make sure that we look after our NHS any way that we can”.

But health leaders warned the health service was “in a state of crisis”, and a headteacher predicted remote learning could return if school staff were struck down with the virus.

The Daily Telegraph reported that up to 10 million “critical” workers would be able to access Covid tests through their employers, after days of complaints that they could not be ordered online and stocks in pharmacies were patchy.

The newspaper said health, education, transport and utilities workers would be included in the scheme, which could be announced as early as this week following a meeting of Cabinet’s Covid Operations Committee on either Tuesday or Wednesday.

But in the meantime Chris Hopson, chief executive of NHS Providers, which represents health trusts, said “a number of trusts across country have declared internal critical incidents over the last few days”.

One of those was United Lincolnshire Hospitals NHS Trust, where “extreme and unprecedented” staff shortages were expected to result in “compromised care”.