There was an “improper motive” for proroguing parliament for so long, the court heard. 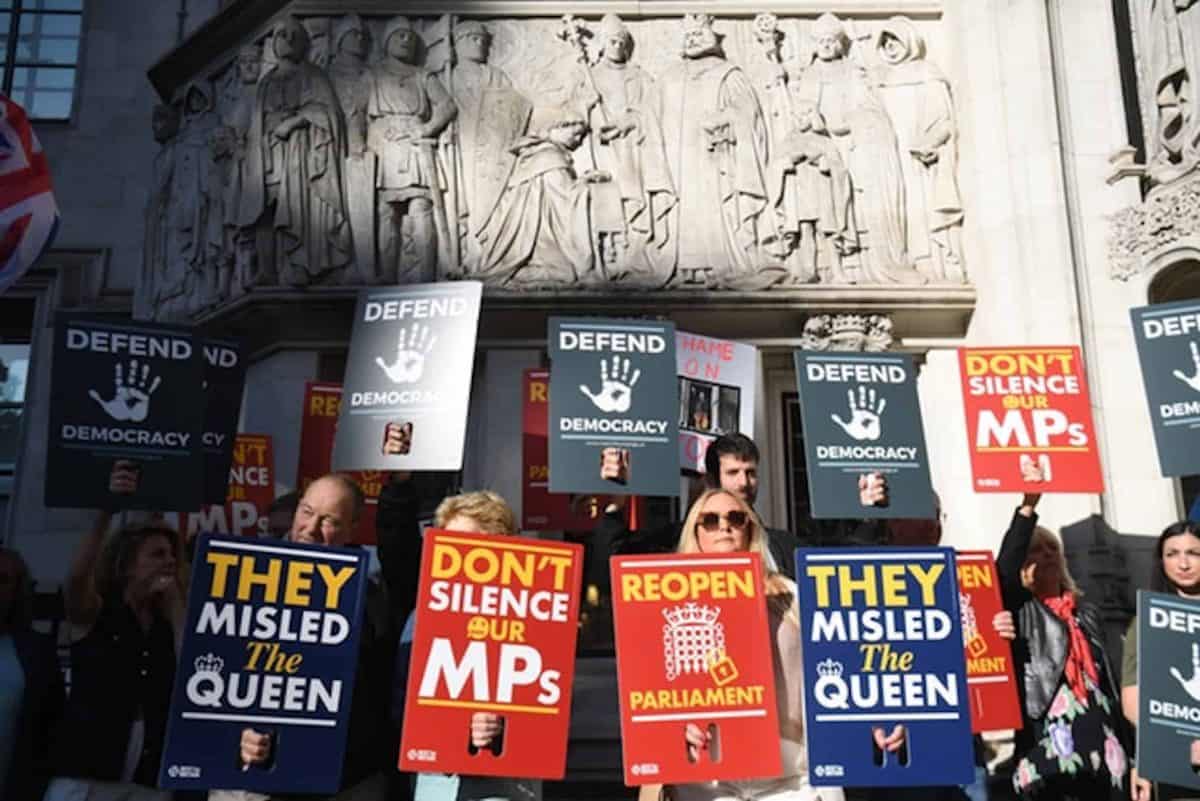 The UK’s highest court has been urged to find that Boris Johnson’s advice to the Queen to suspend Parliament was “of no legal effect”.

Eleven Supreme Court justices were asked at the start of an historic hearing on Tuesday to declare that the Prime Minister’s decision to prorogue Parliament for five weeks was unlawful.

Lord Pannick, on behalf of Gina Miller who had challenged the decision to prorogue parliament in the English courts, opened proceedings.

“No prime minister has abused his power in the manner in which we allege in at least the last 50 years,” said Lord Pannick, arguing that the prorogation was exceptional.

Nobody from the government had explained why parliament had been suspended for so long he added.

Lord Pannick said the five-week period was a deliberate move to stop parliament interfering with the government’s actions.

He said it is “elementary in public law” that a power can only be used for its proper purpose. There was an “improper motive” for proroguing parliament for so long, said Lord Pannick. To use a prerogative power to evade the scrutiny of MPs turns the principles of constitutional law on its head, he added, setting out his arguments.

He added that the High Court was wrong to rule that the courts have no jurisdiction over the decision to prorogue.

Boris Johnson’s refusal to provide a statement about why he had prorogued parliament to the court should count against him, Lord Pannick added.

“The best way to leave with a deal is if our friends and partners over the channel don’t think that Brexit can be blocked by parliament,” Johnson told Sky News, for instance.

The judges are to hear argument over three days arising out of two separate challenges brought in England and Scotland over the legality of the prorogation – the cases resulted in two different outcomes.

A crowd of about 40 protesters, holding signs saying “Defend democracy”, “Reopen Parliament” and “They misled the Queen”, gathered outside the court ahead of the hearing.

Mr Johnson says the five-week suspension is to allow the Government to set out a new legislative agenda in a Queen’s Speech when MPs return to Parliament on October 14.

But those who brought legal challenges against the Prime Minister’s decision argue the prorogation is designed to prevent parliamentary scrutiny of the UK’s impending exit from the EU on October 31.

At the outset of the hearing, Supreme Court President Lady Hale emphasised that the case is only about whether the Prime Minister’s advice to the Queen was lawful.

The High Court in London dismissed the case brought by businesswoman and campaigner Gina Miller – who previously brought a successful legal challenge against the Government over the triggering of the Article 50 process to start the Brexit countdown – finding that the length of the prorogation was “purely political”.

He argued that the High Court “erred in law” in its conclusions in the case brought by Mrs Miller, which was supported by former prime minister Sir John Major, shadow attorney general Baroness Chakrabarti and the Welsh and Scottish governments.

Lord Pannick, in written argument before the court, submitted that the lower court “erred in law by failing to find that the advice of the Prime Minister was an unlawful abuse of power in the circumstances of this case”.

He argues that Mr Johnson’s advice over a five-week suspension was an unlawful abuse of power – pointing out that there has been no prorogation for longer than three weeks in the past 40 years.

He stated in his written argument: “The Prime Minister’s reasons for advising on a five-week prorogation were improper in that they were infected with factors inconsistent with the concept of Parliamentary sovereignty, in particular his belief that Parliament does nothing of value at this time of year and his concern that Parliament might take steps which would undermine the Government’s negotiating position with the EU.”

He told the justices: “It is a remarkable feature of these proceedings that the Prime Minister has not made a witness statement explaining why he decided to advise Her Majesty to prorogue Parliament for a period as long as five weeks, and there is no evidence from the Cabinet Secretary or any other official explaining that matter.”

A cross-party group of around 75 MPs and peers, led by SNP MP Joanna Cherry QC, was responsible for the Scottish challenge and the Supreme Court appeal against the Court of Session’s decision is being brought by the Advocate General for Scotland, on behalf of the Westminster Government.

The Supreme Court justices are being asked to determine in both appeals whether the Prime Minister’s advice to the Queen is “justiciable” – capable of challenge in the courts – and, if so, whether it was lawful.

In the Scottish case, they are also being asked to consider whether the appeal is “academic”, given Parliamentary sittings before the UK’s proposed exit from the EU on October 31.

Mr Johnson advised the Queen on August 28 to prorogue Parliament for five weeks from the week of September 9.

The court will hear submissions from the parties and interveners from Tuesday to Thursday, but it is not clear when they will give a ruling.