With parliament about to restart and Boris Johnson’s blonde ambition clearly irking since he had to resign as Foreign Secretary, today’s Telegraph carries a striking portrait photo and a warning to Theresa May that her Brexit plan would spell “victory for Brussels.” “We have gone into battle waving the white flag,” despaired the ex-Foreign Sec […] 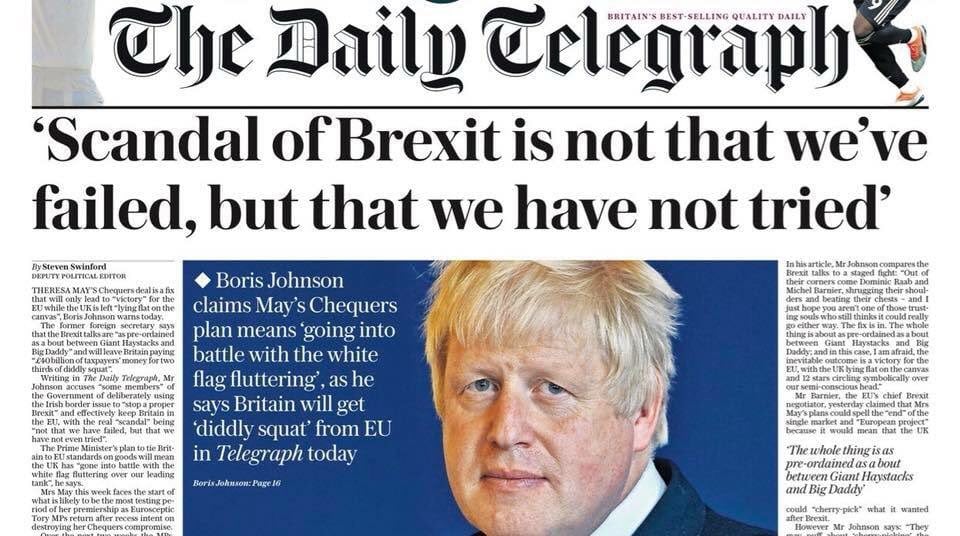 With parliament about to restart and Boris Johnson’s blonde ambition clearly irking since he had to resign as Foreign Secretary, today’s Telegraph carries a striking portrait photo and a warning to Theresa May that her Brexit plan would spell “victory for Brussels.”

“We have gone into battle waving the white flag,” despaired the ex-Foreign Sec in what much of Westminster wrote off as another cynical attempt at a leadership bid.

BoJo bemoaned that the impossible Irish border situation / customs conundrum should not be a major impediment to Brexit two years on. The fact that the Government hasn’t managed to fix a way of stopping a hard border between Northern Ireland and either the Republic of Ireland or Britain while leaving the customs union was proof that were attempting to “stop a proper Brexit”.

If only they had had a Brexiteer as Foreign Secretary. Or Trade Minister. Or as Brexit Secretary indeed. While resigned Brexit Secretary David Davis applauded BoJo’s piece, Downing Street hit back, insisting  that the country needs “leadership and a serious plan”.

Mrs May’s official spokesman dismissed Johnson’s polemic which avoided any blame for himself, insisting he had “no new ideas.”

Indeed it’s not just remainers pointing out today that Johnson was part of the cabinet that he today claimed has “gone into battle with the white flag fluttering over our leading tank”.

And it wasn’t just Downing Street pointing out that not only had Boris Johnson neglected to explain what he would do different, but while plotting to be PM he has neglected to ever put forward his own Brexit plan.

“Is there a longer version of the Boris column somewhere? The version I’m looking at finishes before he lays out a proper plan” quipped Eurosceptic Times columnist Iain Martin.

It’s wrong to say Boris Johnson doesn’t have his own plan on how to Brexit. Here it is in full: pic.twitter.com/upMfAys3x6

Bojo’s Telegraph column isn’t a new tool to sow dissent, court controversy and make trouble for his Prime Minister. Today’s column may not only be a cynical stop towards having a pop at the top job, it also attempts to dissociate the former Foreign Secretary and chief Brexiteer from any blame for the inevitable Brexit mess it predicts.

Despite years winding Telegraph readers up about the EU (remember the “Threat to British pink sausages,” myths about banana bendiness rules and not being able to sell banans in more than threes?), they shouldn’t be surprised by Boris hailing a “victory for Brussels.”

Indeed Boris was revealed to have prepared two columns – one arguing the case for staying in the EU, one for leaving, before deciding to publish the case for leaving the EU and announcing his decision to join the Leave campaign.

Despite his scorn for the EU, even those closest to Boris were surprised by his decision and suspected it was cynical.

“Whatever my great friend Boris decides to do I know that he is NOT an outer,” Tory MP Nicholas Soames, the grandson of Winston Churchill insisted. Just two weeks before BoJo decided to throw his lot in with the Brexit campaign in February 2016, with many speculating this would leave him in a prime position to take David Cameron’s reigns after the referendum, he argued forcefully in the Telegraph that:

“the single market is of considerable value to many UK companies and consumers, and that leaving would cause at least some business uncertainty, while embroiling the Government for several years in a fiddly process of negotiating new arrangements, so diverting energy from the real problems of this country – low skills, low social mobility, low investment etc – that have nothing to do with Europe.”

When his Conservative colleague Michael Gove had insisted that given the choice he would vote to leave the EU in May 2013, Johnson warned that if we genuinely left the EU:

“we would end this sterile debate, and we would have to recognise that most of our problems are not caused by “Bwussels”, but by chronic British short-termism, inadequate management, sloth, low skills, a culture of easy gratification and underinvestment in both human and physical capital and infrastructure.”

As Sonia Purnell, author or the biography Just Boris A Tale Of Blond Ambition once recounted about BoJo:

“When he was once asked, do you have any convictions, he quipped back, ‘Yes, one, for speeding, a long time ago.’ All this Tory in-fighting is a messy distraction from the abysmal reality of Brexit negotiations, with  the EU’s chief negotiator again this weekend explaining why Theresa May’s plan cannot work for the EU.

“The British have a choice,” explained Michel Barnier, “they could stay in the single market, like Norway, which is also not a member of the EU – but they would then have to take over all the associated rules and contributions to European solidarity.”

But allowing the UK to pick and choose certain rules, insisted Barnier would mean every other EU country would ask to be able to, speling “the end of the single market and the European project.”

And in a sobering dose of reality he cautioned car manufacturers not to make too many parts in the UK, as “in order for EU carmakers to benefit from the tariff benefits of the EU-Korea agreement, only a certain proportion of the services may be provided in a car in a third country.”