They may have an even greater variety of life - harbouring weird and wonderful aliens beyond our wildest imagination. 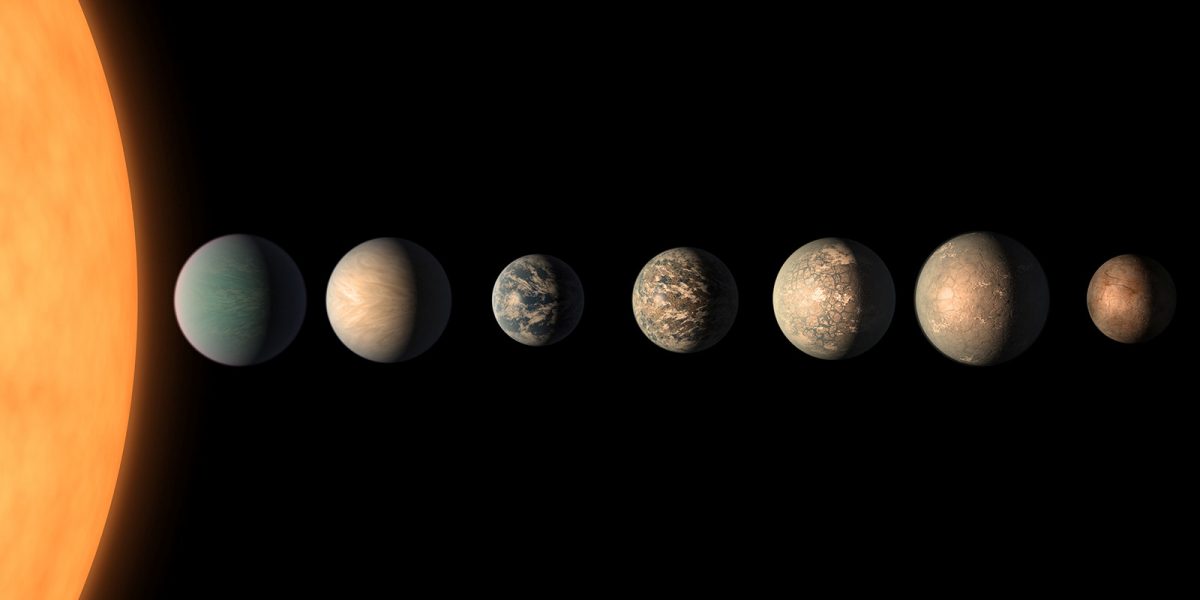 Planets orbiting distant stars outside our solar system may have an even greater variety of life than earth, harbouring weird and wonderful aliens beyond our wildest imagination, scientists say.

Some will have better ocean circulation which fuels the processes necessary for the evolution of life, making them potentially more habitable than Earth.

And extraterrestrials are most likely to be hanging out on those with higher air density, slower orbits and more continents, say scientists.

The findings are based on a NASA computer program that simulated the climates and seas of these mysterious worlds, known as exoplanets.

Two years ago seven Earth-sized planets were detected 40 light years away circling a single star, named Trappist-1. All could have water.

The Milky Way has up to 400 billion stars – and there are up to 200 billion galaxies in the universe.

Study leader Dr Stephanie Olson, of the University of Chicago, said the model suggested some planets have better conditions for life to thrive than Earth itself.

She said: “This is a surprising conclusion. It shows us conditions on some exoplanets with favourable ocean circulation patterns could be better suited to support life that is more abundant or more active than life on Earth.”

Primitive microbes evolve in the sea due to a phenomenon called ‘upwelling’ where cold water rich in nutrients like nitrogen and phosphorus move to the surface.

This fuels algae, tiny photosynthesising plants that float in the ocean and often develop quickly into a ‘bloom’.

Explained Dr Olson: “Our work has been aimed at identifying the exoplanet oceans which have the greatest capacity to host globally abundant and active life.

“Life in Earth’s oceans depends on upwelling, or upward flow, which returns nutrients from the dark depths of the ocean to the sunlit portions of the ocean where photosynthetic life lives.

“More upwelling means more nutrient resupply, which means more biological activity. These are the conditions we need to look for on exoplanets.”

This spawns tiny animals called zooplankton that eat the algae. Once more complex organisms emerge they consume the zooplankton.

The area soon becomes rich with marine life. About half the fish caught in the world come from upwelling zones.

They were able to define which types stand the best chance of developing and sustaining successful biospheres.

Dr Olson said: “We have used an ocean circulation model to identify which planets will have the most efficient upwelling and thus offer particularly hospitable oceans.

“A further implication is that Earth might not be optimally habitable and life elsewhere may enjoy a planet that is even more hospitable than our own.”

The discovery of exoplanets has accelerated the search for life outside our solar system. The huge distances make them impossible to reach with space probes.

But telescopes and other remote sensors help scientists understand the conditions that prevail.

They can then use these observations to identify which might host life through sophisticated models for planetary climate and evolution.

Dr Olson said: “There will always be limitations to our technology, so life is almost certainly more common than ‘detectable’ life.

“This means in our search for life in the universe, we should target the subset of habitable planets that will be most favourable to large, globally active biospheres because those are the planets where life will be easiest to detect – and where non-detections will be most meaningful.”

She told the Goldschmidt Geochemistry Congress in Barcelona: “NASA’s search for life in the universe is focused on so-called Habitable Zone planets, which are worlds that have the potential for liquid water oceans.

“But not all oceans are equally hospitable – and some oceans will be better places to live than others due to their global circulation patterns.”

Added Dr Olson: “Ideally this work this will inform telescope design to ensure future missions, such as the proposed LUVOIR or HabEx telescope concepts, have the right capabilities.

“Now we know what to look for, so we need to start looking.”

Professor Chris Reinhard, of the Georgia Institute of Technology who was not involved in the study, said: “We expect oceans to be important in regulating some of the most compelling remotely detectable signs of life on habitable worlds.

“But our understanding of oceans beyond our solar system is currently very rudimentary.

“Dr Olson’s work represents a significant and exciting step forward in our understanding of exoplanet oceanography.”

The first exoplanet was discovered in 1992, and currently more than 4000 exoplanets have been confirmed so far. The nearest known exoplanet is Proxima Centauri b, which is 4.25 light years away.

Currently much of the search for life on exoplanets focuses on those in the habitable zone, which is the range of distances from a star where a planet’s temperature allows liquid water oceans, critical for life on Earth.