Nine people were arrested on suspicion of violent disorder, the Metropolitan Police said. 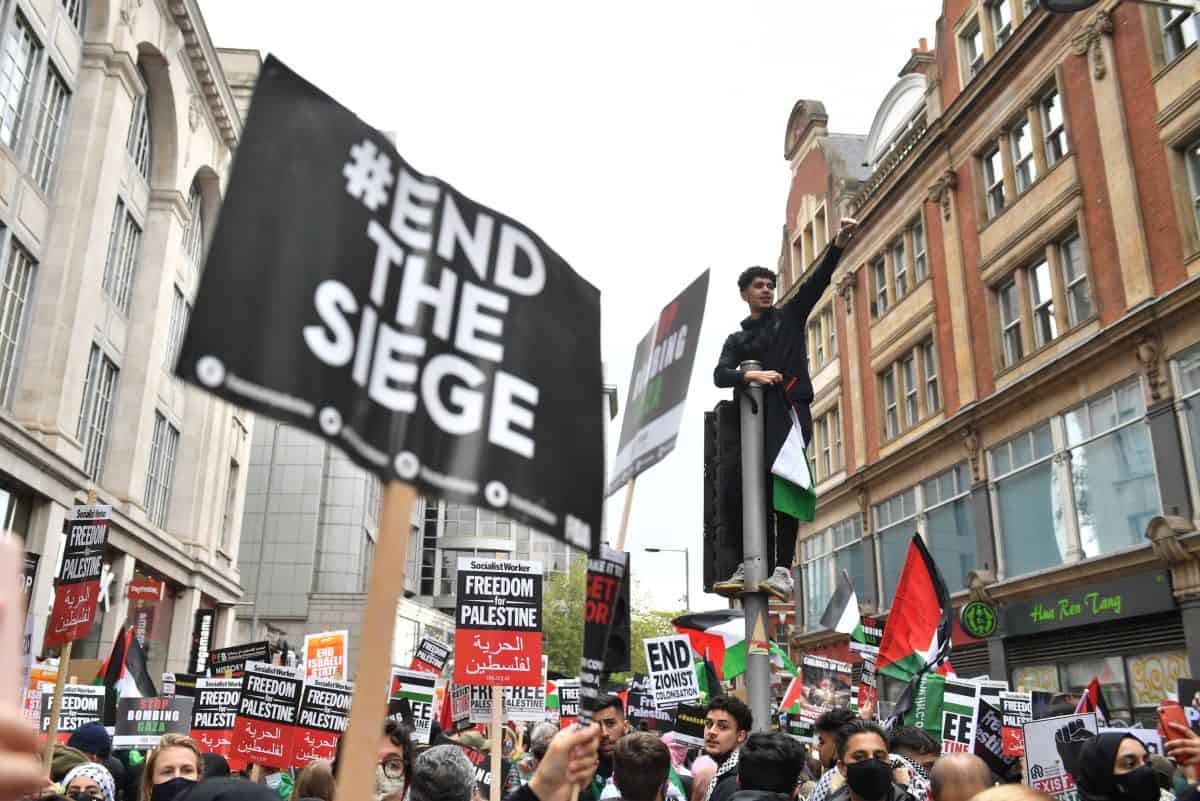 Nine police officers were injured and missiles were thrown amid efforts to disperse crowds outside the Israeli Embassy in London.

Thousands of people marched through the capital on Saturday to the gates of the embassy in Kensington, while protests took place in other cities across the UK and Ireland in solidarity with the people of Palestine.

Nine people were arrested on suspicion of violent disorder in London, the Metropolitan Police said.

A further four were arrested on suspicion of breaching the Health Protection Regulations, the force added.

The Met said small pockets of disorder had followed a largely peaceful demonstration.

Superintendent Jo Edwards, in charge of the policing operation, said: “We once again saw police come under fire from missiles and several were injured as a result of this. It is totally unacceptable and I wish those officers a speedy recovery.

“Throughout the day, officers sought to engage with people who had gathered to demonstrate, and encourage them to disperse to help protect themselves and others during this public health crisis.

“Where this approach did not work and officers were met with hostility, they took enforcement action.”

Former Labour leader Jeremy Corbyn appeared alongside the Palestinian ambassador to the UK at a rally in support of the Palestinians, as the conflict with Israel continues.

Demonstrators chanted “free, free Palestine”, and held banners calling for an end to the bombing of the territory by Israeli forces.

A temporary stage was set up on Kensington High Street and organisers urged people to keep moving down the road as numbers continued to swell.

“Think what it’s like being a mother or father and seeing a building bombed in front of you, knowing your family is in there, and you can do nothing,” said Mr Corbyn.

“It’s our global voices that will give succour, comfort and support in those settlements alongside Gaza and all over the West Bank, East Jerusalem who are suffering at this time.

“End the occupation now. End all the settlements now and withdraw. End the siege of Gaza now.”

Husam Zumlot, Palestinian ambassador to the UK, said: “This time is different. This time we will not be denied anymore. We are united. We have had enough of oppression.

“Today we are saying enough, enough with the complicity. Thank you for standing with us.”

Ms Abbott told those present: “We must remember we are part of an international movement. This is a worldwide movement for justice.

“Palestinian people are having their land seized… and they are now being killed in their homes. All of this is illegal.”

The names and ages of the children killed in the conflict were read out and a minute’s silence was then held.

There were cheers as organisers told those in attendance that the turnout was “the biggest pro-Palestine demonstration since 2014”.

Coloured smoke was set off along Kensington High Street and some demonstrators climbed on to buildings and bus stops, while dozens of officers from the Metropolitan Police lined nearby streets.

Demonstrators also gathered outside the Israeli embassy in Ballsbridge in Dublin, while a protest also took place in Bristol.

The protests came as the Associated Press reported that an Israeli air strike destroyed a high-rise building that housed the AP, Al-Jazeera and other media in the Gaza Strip.

The AP said the air strike came roughly an hour after the Israeli military ordered people to evacuate the building.

Gary Pruitt, the president of the US news agency, said: “We are shocked and horrified that the Israeli military would target and destroy the building housing AP’s bureau and other news organizations in Gaza.”

Thousands of Palestinians have been forced to flee their homes after a week of sustained conflict.

Since Monday night, Palestinian militant group Hamas has fired hundreds of rockets into Israel, whose military responded by barraging the Gaza Strip with tank fire and air strikes.

At least 145 people in Gaza and eight in Israel have been killed since the fighting erupted on Monday night.

In Israel those killed, include a six-year-old boy and a soldier.

The demonstration in London was organised by Palestine Solidarity Campaign, Friends of Al-Aqsa, Palestinian Forum in Britain, Stop The War Coalition, Campaign for Nuclear Disarmament and the Muslim Association of Britain.

A spokesperson for the organisers called on the UK Government to take “immediate action”, saying it is “complicit” as long as it “continues to offer Israel military, diplomatic and financial support.”