ernment data shows the number of coronavirus patients in UK hospitals jumped by 44% week on week to 11,898 on Wednesday, the highest number since March 2. 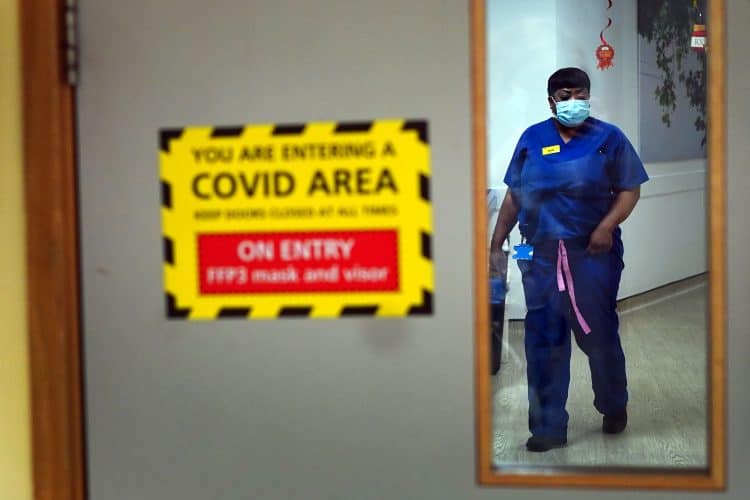 The number of NHS hospital staff in England absent due to Covid-19 has nearly doubled since the start of the month, new figures show.

Some 24,632 staff at NHS hospital trusts were ill with coronavirus or having to self-isolate on Boxing Day, up 31% from 18,829 a week earlier and nearly double the 12,508 at the start of the month.

The new NHS England data comes after separate figures showed that the number of Covid patients in hospital in England had climbed to 11,452 on Thursday, the highest level since February 26.

Matthew Taylor, chief executive of the NHS Confederation, said the NHS is facing a “perfect storm” of rising Covid hospital admissions and illness alongside increasing numbers of frontline workers being off sick.

“The NHS is putting in plans to step up once again for patients with the new Nightingale surge hubs, extra support from community services and virtual wards, but there is no doubt the whole system is running hot,” he said.

“While the Government seems determined not to increase restrictions in England, it is vital we all behave in ways that will not exacerbate an already dangerous situation.”

NHS England national medical director Professor Stephen Powis said the health service is setting up the Nightingale surge hubs at hospitals across the country and recruiting thousands of nurses and reservists.

He added: “We don’t yet know the full scale of rising Omicron cases and how this will affect people needing NHS treatment but, having hit a 10-month high for the number of patients in hospital with Covid while wrestling with sharply increasing staff absences, we are doing everything possible to free up beds and get people home to their loved ones – and in the last week hundreds more beds were freed up each day compared to the week before.

“The NHS is on a war footing, and, while staff remain braced for the worst, with Covid absence for NHS staff almost doubling in the past fortnight, keeping as many colleagues as possible at work on the front line and minimising absence, will be essential in the next few weeks.”

Meanwhile, ministers have been warned they must be ready to apply restrictions “at pace” as the NHS puts itself on an emergency footing to deal with a possible surge in Covid-19 patients.

Chris Hopson, chief executive of NHS Providers, said trust leaders recognise that the UK Government’s threshold for introducing extra measures in England “hasn’t been crossed yet” but that additional capacity is being created in case hospital pressures increase.

Government data shows the number of coronavirus patients in UK hospitals jumped by 44% week on week to 11,898 on Wednesday, the highest number since March 2.

In Scotland and Wales, nightclubs are closed to New Year’s Eve partygoers, and restrictions have been placed on hospitality.

But in England, ministers have opted to forgo measures beyond the UK Government’s Plan B, which includes mandatory Covid passes for large events, increased mask-wearing in public places and work from home guidance.

Mr Hopson, chief executive of the group which represents health trusts in England, said even if extra restrictions are put in place to control the Omicron variant, it will take two weeks to reduce the hospital admission rate.

“So, on that basis, trust leaders can see why the Government is arguing that, in the absence of a surge of seriously ill older patients coming into hospital, that threshold hasn’t yet been crossed.

“But we still don’t know if a surge will come, and indeed we are exactly talking about the preparations we are making for that surge right now.

“So, in terms of restrictions, I think we are in exactly the same place we’ve been for the past fortnight, which is the Government needs to be ready to introduce tighter restrictions at real speed should they be needed.”

So-called Nightingale hubs are being established at some hospitals to deal with a “super-surge” in Covid patients in a move that Mr Hopson said would require the NHS to “go into an emergency mode” amid staff shortages, partly due to high coronavirus infections.

He said recently retired health workers and volunteers would be asked to staff the hubs, which would be used for patients “who are effectively over the worst” and being readied for discharge.

It came as a leading scientist said it is likely that the NHS will be overwhelmed by the spread of Omicron.

Professor Peter Openshaw, who sits on the New and Emerging Respiratory Virus Threats Advisory Group (Nervtag), told BBC Breakfast: “I think we haven’t quite reached the threshold that was set by Government in terms of the NHS being overwhelmed, but it looks like that will be reached quite quickly.

“What I’m very concerned about is our NHS staff, my dear colleagues who have worked so, so hard all through the repeated waves of this infection. How are they going to cope?”