West Midlands Police have released the footage in a bid to catch the trio of thugs who struck in Moseley, Birmingham 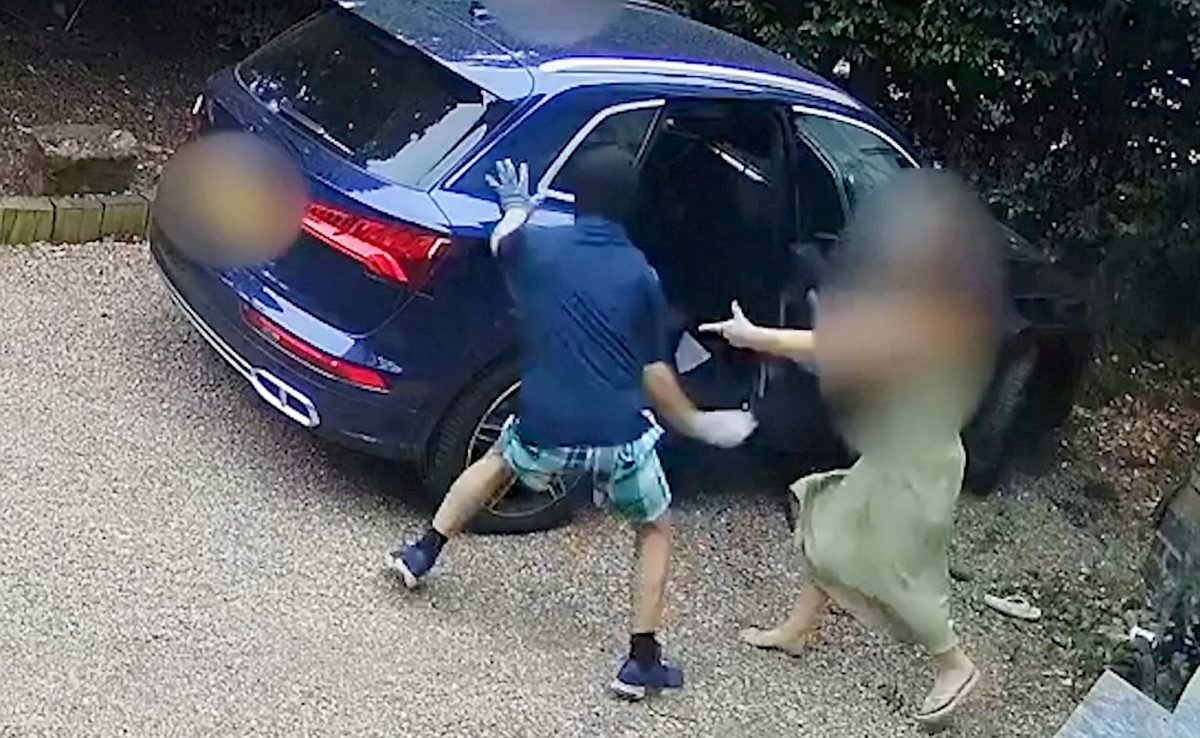 A hero mum who was caught on camera fighting off three carjackers on her driveway said her instinct was to protect her three-year-old son who was still inside the vehicle.

Amy-Leigh Hill, 24, has spoken for the first time about her ordeal since CCTV of her emerged showing her sending the thugs packing empty-handed last week.

She had been getting out of her £55,000 Audi SQ5 when the masked yobs approached her on Oakland Road, in Moseley, Birmingham at around 6pm on July 26.

One of the men was armed with a crowbar and demanded the keys to the vehicle but Amy-Leigh refused to hand them over and bravely fought back.

CCTV footage captures the men wrestling with Amy-Leigh but she manages to shove them away before they flee from the scene in a waiting getaway car.

The mum-of-one says her son Ronny has been traumatised by the incident and keeps asking where “the baddies” are.

She has now spoken out about the terrifying incident in the hope someone might recognise the attackers and report them to police.

Amy-Leigh, who is currently unemployed but most recently worked as a social media marketing executive, said: “Somebody out there knows these people and I want them caught.

“I had picked up Ronny from nursery with my friend and we drove home.

“We were talking about going out for a drink and having a nice meal.

“I turned round to shut the door when one man came towards me demanding the keys.

“I’d noticed them in their car in the road just minutes before but didn’t think anything of it. I don’t know if they’d been following me, were waiting for me or if it was just random

“Then they started attacking me from all sorts of angles. I was pushing them off.

“They pushed me up against the window of my house by the throat. I kicked them off and was screaming at them to get off.

“I was saying ‘my child is is in the car’ but they weren’t paying attention. I did everything in my power to do stop them. I acted on instinct.

“My friend said ‘give them the keys’ but I screamed ‘my baby’s in the car’.

“They had a crowbar but weren’t hitting me with it, so I thought, well if they were going to hit me they’d have done it by now and carried on fighting back.

“One of them got into the car and I shouted ‘my son’s in the car – leave him alone’.

“I even sat on my handbag with it under a plant pot it so there was something between them and my keys.

“They paid more attention. We called the police on loudspeaker and neighbours were checking if we were OK. At that point they ran off.

“We have had the car for 12 months, and three months after it was stolen from our house.

“The car was kept by the police for six months, then three months after we got it back someone tried to take it again.

“I am desperate to move house and get rid of the car.

“I think the carjackers needed smacked bottoms. They are juveniles who need to go and get a job.

“It’s ridiculous they will try to steal things from other people who have got their qualifications and spent years and years working for it.

“I’m devastated my little boy has been traumatised. He is always asking where the baddies are, and talking about the police.

“He was crying his eyes out when he got out the car. What are we supposed to tell him? It’s just so scary.

“I just say they aren’t coming back, because they’re in a cage. But that’s where they really need they be.”

West Midlands Police are still appealing for information about the attack. Anyone with any information can contact them on 101 or Crimestoppers on 0800 555 111.