James Hicks, 20, and Joshua Scales, 18, carried out the robbery on a stolen moped in June last year as their victim walked home from a tube station. 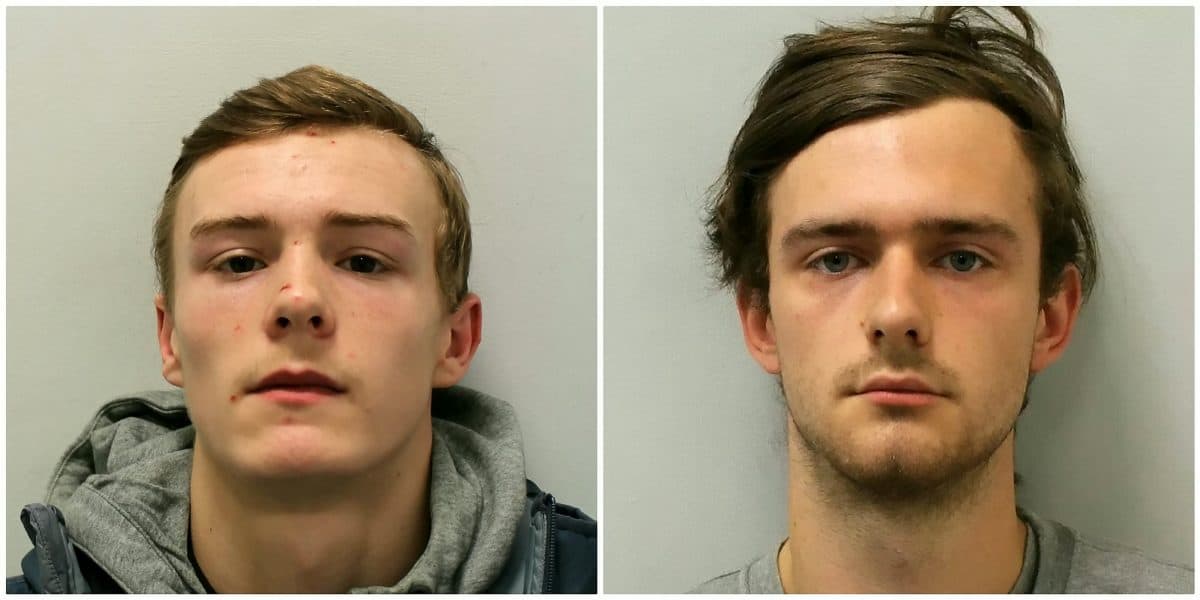 A pair of moped muggers who left a young woman in a coma with a bleed on the brain while using her bank card to buy ice cream and vodka have been jailed for a total of 14 years.

James Hicks, 20, and Joshua Scales, 18, carried out the robbery on a stolen moped in June last year as their victim walked home from a tube station.

Hospital pharmacist Piruntha Palarasa was listening to music on headphones attached to her smart phone at around 9pm when she was ‘hunted down’ on a quiet residential street in Edgware, north London.

The 25-year-old bravely struggled to keep hold of her handbag and phone as the moped mounted the pavement and both thugs tried to grab her belongings.

Scales then punched her in the head causing her to fall onto the pavement and fracture her skull, Harrow Crown Court was told.

The robbery happened the same day that comedian Michael McIntyre was targetted by hammer-wielding moped robbers as he picked up his kids from school in nearby Golders Green, though police are not linking the two attacks.

Prosecutor Louise Oakley told the court Miss Palarasa was expected to have life-changing injuries but made a miraculous recovery after being kept in an induced coma for nearly three weeks.

Miss Palarasa said in a statement that she had to learn to walk and speak again after coming out of her induced coma and still suffers from double vision for which she wears glasses. She previously had 20:20 vision.

The pair were described as ‘hunting’ her down and within ten minutes of the robbery they were using her cards.

Sentencing them, Judge Rosa Dean said: “She was minding her own business listening to music on her phone and on a residential street and she – in her words – was hunted down by you both.

“You both decided to go for her bag, pulling it even though she was shouting at you to get away. You were shouting at her to ‘give it up’.

“Witnesses came to shout at you and off you went. But before you left you pushed the victim Scales, and having punched her face this struck her with such force we see her falling to the pavement hitting her head.

“The pair of you simply drove off and went off spending her money.

“It makes for very disturbing viewing because you see that moped targeting that young woman, driving up behind her as you Hicks try to swipe her phone then she runs for it and there then allows a short but terrifying pursuit where she is chased and chased again.

“She’s doing her very best and she’s being extremely brave trying to get away but you block her, corner her and pounce on her.

“It is a very unpleasant feature of this case that you then both left her, an injured woman, lying on the road and Hicks within ten minutes you then without a care in the world were spending on her card.

“Thank goodness others saw what was going on and came to help her because she needed urgent medical treatment.”

Last year Hicks and Scales both pleaded guilty to the robbery with Hicks admitting six counts of fraud relating to the use of her bank cards after the attack and Scales admitting to three.

The court heard the pair also admitted handling stolen goods relating to a Piaggio Vespa they used to carry out the robbery in June.

Hicks also admitted two other robberies on May 25 last year relating to a man and a woman who were threatened with being stabbed if they did not hand over their bags that contained phones and a laptop.

Scales additionally admitted one count of theft relating to money stolen from a safe at his children’s home on May 11 and possession of cannabis when he was arrested three days after the June 4 robbery.

Miss Oakley said: “Miss Palarasa was at London Zoo with friends on 4 June 2018. At around 7pm she decided to make her way home.

“She boarded the Northern line tube and got off at Burnt Oak station as she decided to complete her journey on foot because the weather was nice.

“She removed her headphones from her ears. She remembers a moped coming towards her on the pavement with two males on it. The driver, Joshua Scales, shouted at the pillion passenger James Hicks to ‘get off the bike and go get her phone’.

“Hicks then tried to grab the telephone as the moped went past her. In her words, she describes the two males on the moped ‘hunting her down’.

“She has no further memory of what actually happened that day and instead woke up in hospital having sustained what were initially thought to be life changing injuries.”

CCTV of the incident shows Scales and Hicks passing by the woman, who works as a hospital pharmacist, before coming back around and mounting the pavement to chase her.

As she crosses the road they follow and cut her off as she tries to hide behind a van.

When passenger Hicks is unable to successfully snatch her bag from her, Scales also gets off the moped and the pair can be seen struggling with her before Scales punches her in the head and she falls to the ground.

The prosecutor said: “She was taken to St Mary’s Hospital in Paddington. She was unable to recall events.

“She had what was describes as an open bleeding wound to the back of her head and a large swelling. She was having difficulty breathing.

“A CT scan revealed she had a bleed on the brain. As a result of her injuries and a reduced level of consciousness and increased chance of aspiration she was incubated and ventilated.

“She was placed in an artificially induced coma and remained in it until June 15. Every time doctors tried to take her out of it up until then they had to formally resuscitate her.

The court heard the first transactions by Scales were just ten minutes after the incident and included a £2 and further £9.60 purchase of soft drinks immediately after the attack.

A few minutes after the attack, the pair walked into another shop in the area and bought a £29.99 bottle of vodka on Miss Palarasa’s bank card. They then spent £12.30 on food and ice cream.

A later transaction for another bottle of alcohol worth £11.50 was declined after a shop worker noticed the name on the card began with ‘Miss’. A return journey with Wattling Radio Cars to Queensbury worth £10 was additionally rejected.

When her impact statement was written in July last year she still required someone to walk up the stairs behind her in case she fell and suffered from head and neck pain.

The woman said she suffers from nightmares and was ‘shocked’ by what the teenagers had done to her.

Scales, of Newham, east London, was handed an extended sentence after the judge ruled he was ‘dangerous’.

Judge Dean said: “It seems to me sadly that your behaviour has now been out of control for many years. Your criminal record is serious. Court orders in the past have had no control over you.”

He was jailed for a total of six years and four months with an extended licence period of three years.

Hicks, of no fixed address, was jailed for seven-and-a-half years.

Detective Inspector Steve Brownlee, Operation Venice, said: “Scales and Hicks left a young woman fighting for her life after violently assaulting her, demonstrating the extreme lengths they were prepared to go to steal property.

“The tenacity of the Venice team led to these criminals being located and arrested within 72 hours of the offence being committed, as well as the capture of the evidence needed to obtain their conviction and this sentence.

“Operation Venice will stop at nothing to bring to justice criminals who rob people, and will use every legal tactic at our disposal, including tactical contact to do so.”