The plane departed from Chisinau, the capital of Moldova. 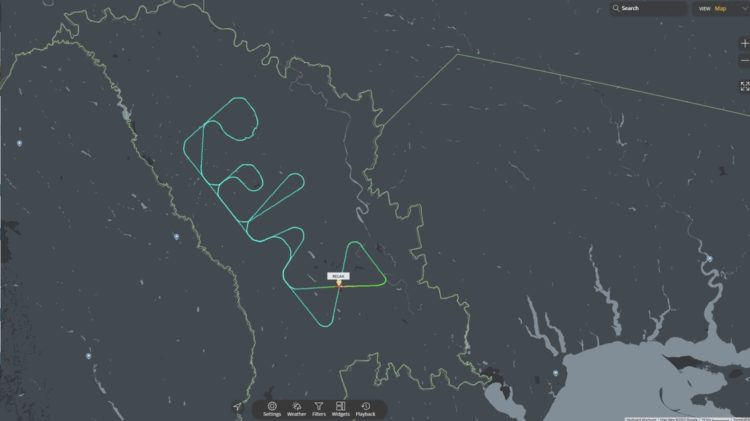 A passenger plane wrote “relax” with its flight path near Ukraine’s border.

Amid heightened tensions with Russia, an Air Moldova plane drew an 80-mile wide version of the word using its flight path, data from Flightradar24.com revealed.

The plane, a 23-year-old Airbus A321, departed from Chisinau, the capital of Moldova, for a one-hour 40-minute flight before landing back at the same airport.

Tens of thousands tracking flight at one point

It flew at an altitude of 10,000 feet, at times just 25 miles from the country’s border with Ukraine, PA news agency has reported.

Over 30,000 users were tracking the flight at one point, according to Flightradar24.com.

According to Al Jazeera, the Ukraine crisis is “very sensitive” for the Russia-backed breakaway state of Transnistria – a region which is internationally-recognised as part of Moldova, but is home to Russian troops and lies on Ukraine’s border.

In October last year, Russia threatened gas supply in Moldova, which is Europe’s poorest state, according to BBC News.

Until then, 100 per cent of the country’s gas was coming from Russia, but upon the absence of a new deal after the contract expired in September, Russian giant Gazprom reduced supplies, prompting Moldova to declare a 30-day state of emergency.

But it is not just Russia’s neighbours who have felt increased threats – UK prime minister Boris Johnson has said this is a “moment of extreme danger for the world” as tensions are growing at Ukraine’s border.

Speaking at a security summit in Germany, Johnson said it has “seldom been more vital to preserve our unity and resolve”.

“If Ukraine is invaded and if Ukraine is overwhelmed, we will witness the destruction of a democratic state,” the prime minister said, according to Sky News.

Johnson labelled the signs from Russia as “grim” and warned countries across the globe “should not underestimate the gravity of this moment”.

He said: “The risk now is people will draw the conclusion that aggression pays and that might is right so we should not underestimate the gravity of this moment and what is at stake.

“As I speak to you today, we do not fully know what president Putin intends, but the omens are grim and that is why we must stand strong together.”

Truss also warned that a Russian invasion of Ukraine would be a “very dangerous moment” for the entire world, according to Sky News.