Bristol-based animal welfare charity Viva! is launching its new campaign, Trash. The campaign aims to raise awareness of the forgotten victims of the dairy industry – male calves – and forms just one part of their ongoing campaign to highlight the dark side of dairy. To mark the launch of Trash, Viva! has commissioned two giant vegan billboards to […]

by Joe Mellor
in Food and Drink, Media 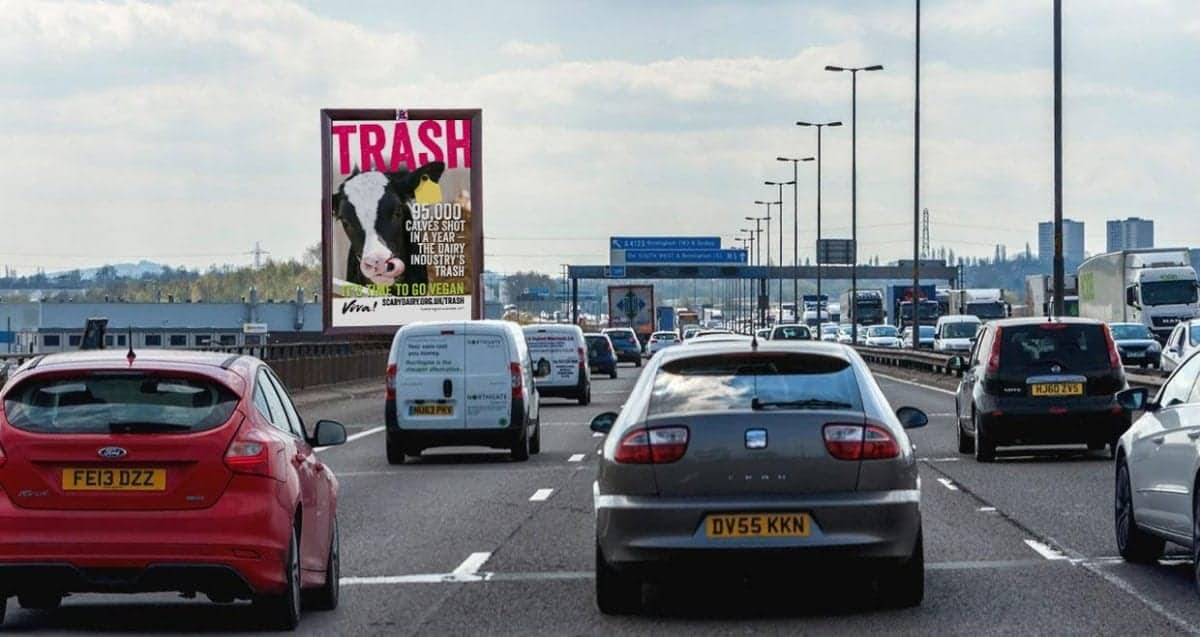 Bristol-based animal welfare charity Viva! is launching its new campaign, Trash. The campaign aims to raise awareness of the forgotten victims of the dairy industry – male calves – and forms just one part of their ongoing campaign to highlight the dark side of dairy.

To mark the launch of Trash, Viva! has commissioned two giant vegan billboards to appear on one of the busiest stretches of motorway in the UK for the first two weeks of October.

The emotional billboards feature young calves alongside the text “95,000 male calves shot in a year – the dairy industry’s trash”. The billboards stand at a giant 7.5m high and will target commuters travelling both northbound and southbound on the M5 near Birmingham. Over the two week period the billboards are estimated to reach 1.6 million people. 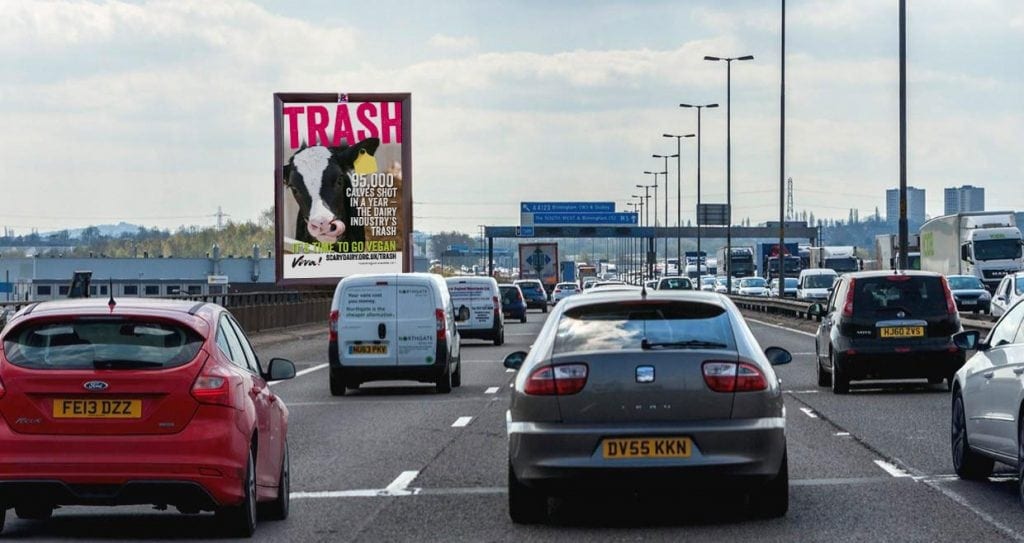 In addition to the billboards, the charity has commissioned YouTube adverts highlighting the plight of male calves in the dairy industry. The short emotive video will be the firstvegan YouTube advert shown in the UK. Paid YouTube mobile advertising is 84% more likely to receive attention than TV advertising and YouTube vlogging has been creditedfor bringing veganism into the mainstream. YouTube provides the perfect opportunity to broadcast a vegan message to an audience who are really listening.

Lastly, throughout October Viva! will host a number of educational street action events across the UK to encourage the public to choose plant-based products. Events will take place in eight cities from Glasgow to London and feature an 8-foot-tall inflatable milk carton. The street action events will collaborate with local vegan groups to inspire positive discussions about veganism.

You can spot the street action events at the following locations:

Cows, like humans, only produce milk after pregnancy to feed their offspring. Dairy cows produce milk for the best part of a year and then stop, and so to continue producing milk for human consumption they are kept in a perpetual cycle of forced pregnancy and birth.

Around two million dairy calves are born in the UK each year. Male calves are a ‘useless by-product’ of the dairy industry, which means many are shot shortly after birth or sold to the veal and beef industry. Female calves face the same fate as their mothers – near constant pregnancy until they collapse from exhaustion and are killed for ‘low grade beef’ at around five years of age. 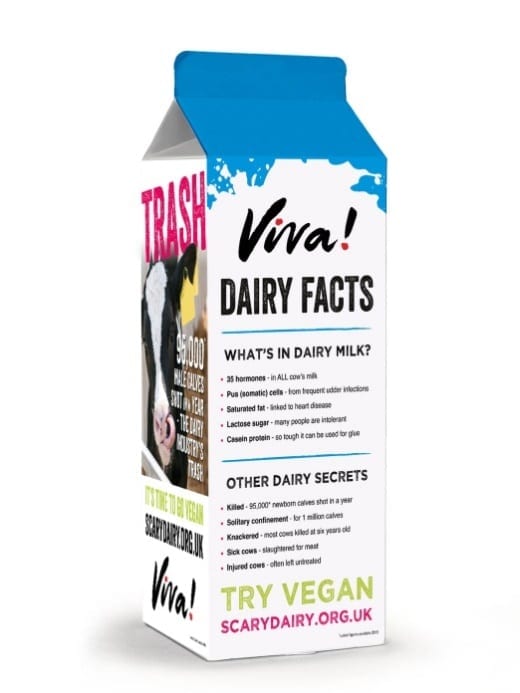 Juliet Gellatley, founder and director of Viva! discusses the importance of this campaign: “The dairy industry subjects dairy cows and their calves to a lifetime of misery. Dairy cows are artificially inseminated at a young age. They carry their babies for nine months – just like humans – but then have their calves cruelly ripped away from them just hours after birth. Male calves are viewed as useless in the dairy industry and so are brutally shot in the head. This practice is standard across the dairy industry and is used to produce ice-cream, milk, cheese butter and yogurt.

Thankfully, the public are beginning to open their eyes to the reality of the dairy industry. The purpose of these adverts are to give a voice to the hidden victims of dairy and to further show that humans are not meant to consume cow’s milk. There has never been a better time to stop supporting this cruel industry by choosing to go dairy-free.”