Chants of “Boris Johnson, shame on you” could be heard. 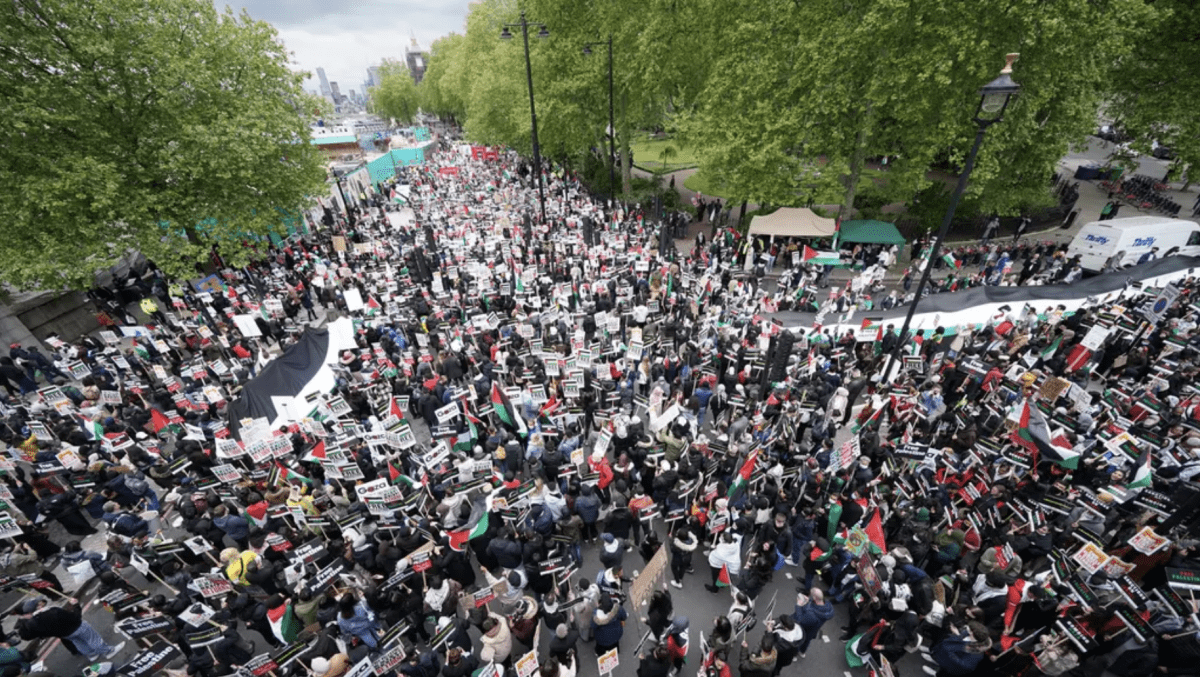 Thousands of people have marched through central London in solidarity with Palestine.

They congregated at Victoria Embankment on Saturday afternoon before making their way to Hyde Park.

Holding banners, placards and flags, the demonstrators let off green and red-coloured smoke and chanted, blocking traffic as they marched.

The protests came after an 11-day military offensive between Israel and Palestine in the Gaza Strip.

Some demonstrators could be seen wearing costumes, masks and face paint, while others were draped in the Palestinian flag.

Groups of police watched as some protesters climbed bus stops and lampposts and wrote “Free Palestine” on walls.

Chants of “Israel is a terrorist state” and “We are all Palestinians” could be heard during the march.

As the crowd reached Downing Street, chants of “Boris Johnson, shame on you” rang out.

A temporary stage has been set up in Hyde Park where a number of speeches will be made this afternoon.

“Mothers, fathers, brothers, sisters and children have been bombed and murdered, Palestine has to be free.”

Another, named Jake, said: “I stand in solidarity with Palestinians, and so should everyone, no matter your nationality.

“It’s great to see so many people come out in their thousands to support the cause. We will win – our cause will be heard.”

While largely peaceful, a few people could be seen throwing objects at police who attempted to split the crowds in Hyde Park.

Among the groups in attendance were branches of the National Education Union, the Palestine Solidarity Campaign and Stop The War Coalition.

Saturday marked the first full day of a truce that ended the fourth Israel-Hamas war in just over a decade.

Related: ‘Polarising’ political events could lead to ‘summer of significant difficulty and disorder’