Large plumes of thick, grey smoke could be seen with a video of the blaze posted on social media showing an explosion leading to a burst of flames. 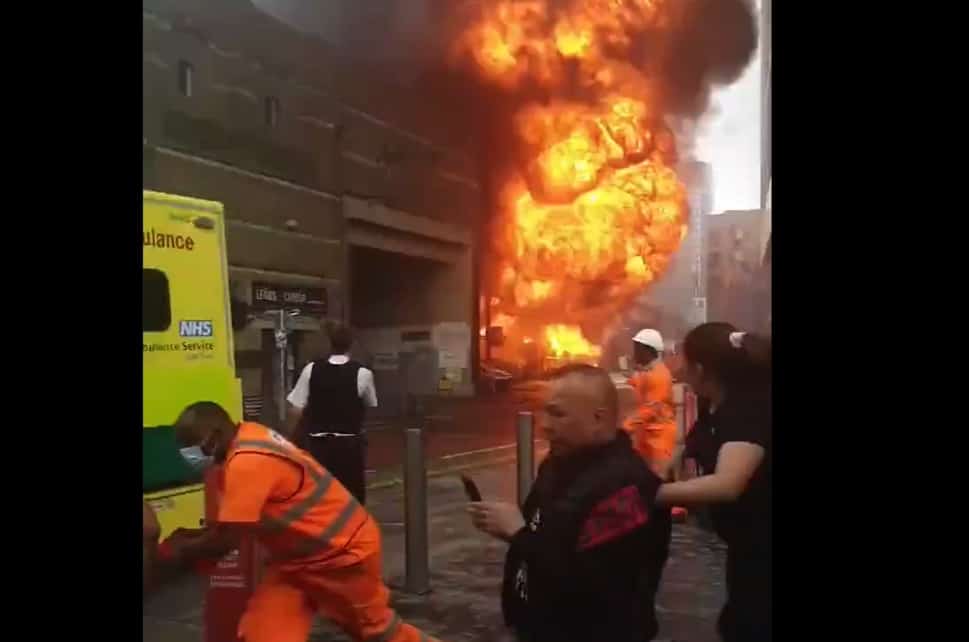 A major fire has broken out at London’s Elephant and Castle station.

Smoke could be seen pouring out around the station and near to large tower blocks.

Video also showed a fire ball exploding out of a building as emergency services attended.

It is unclear if anyone has been hurt in the incident, but it is believed the fire could have come from T.R. Autos, a vehicle repair shop based near the station.

London Fire Brigade say they have ten fire engines and 70 firefighters at the scene and have taken nearly 50 999 calls.

They confirmed that three commercial units underneath the railway arches are completely alight and four cars and a telephone box are also alight near the station.

Road closures are in place and people are advised to avoid the area and keep windows and doors closed.

A Metropolitan Police said: “There are significant road closures in place and the public are advised to avoid the area.

“The incident is not believed to be terror-related.”

“We heard an explosion”

Sara Scarpa, 25, lives in nearby apartment building Hurlock Heights and said smoke and the noise of the explosion had reached her window.

“We opened the window for a sec as you could hear people shouting, and we smelt something very very strong,” she said.

“The smoke (was) dying down a little… we heard an explosion and now it started again.

A restaurant worker close to Elephant and Castle station said she was evacuated after the fire broke out.

Alex Leckie, 30, assistant manager at Tupi, said: “The entire building was evacuated, we began to smell smoke and the store owner went to check, we saw smoke billowing out and what I’m told is the mechanics were on fire, the smoke pillar started enveloping the apartment blocks as well and we kept hearing intermittent bangs.

“The police have indicated it could be some time (until they are allowed back inside). They have repeatedly pushed the crowds back even from the Castle Square Park and cordoned off the roads, there is a very, very heavy presence.

“At this point emergency crews have everyone well clear of the area.”

“The smell was awful”

Martin Bobrowski, a builder who is working opposite the station, said he heard ambulances and police driving nearby before seeing smoke coming from the station at about 2pm.

“I heard the police come and I thought there was an accident nearby, but then they started blocking the road off. I then came outside for a cigarette and saw all the black smoke,” he told the PA news agency.

“I was really surprised to see it and a bit scared. They haven’t told us anything. The smell was awful. It smelt like a burning electrical cable smell.”

Officers at the scene said the station has been fully evacuated along with the nearby Strata residential building.

They described it to local residents as a “major incident”, adding that road closures are going to be in place for “several hours”.

Footage from Elephant and Castle

Early video from the scene of the blaze at railway arches in #ElephantCastle. We have 10 fire engines & 70 firefighters attending & have taken nearly fifty 999 calls. Please avoid the area https://t.co/L6NNuDfThB