"If you're not answering the question, you will be interrupted and I'm sorry if that's too hard for you but that's how it works." 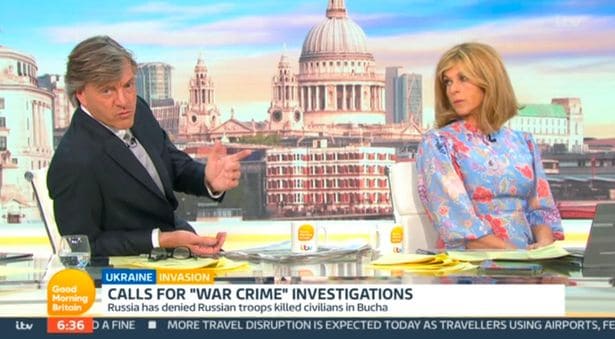 They say that every dog has its day, and so it was with Richard Madeley on today’s Good Morning Britain.

The gaffe-prone presenter delivered a stunning performance as James Cleverly tried to dodge questions about the cost-of-living crisis.

The Tory MP was pressed on when a solution will be agreed upon as a leadership vacuum opens up in Number 10.

Leadership frontrunner Liz Truss has remained unmoved on the issue, pledging to ‘cut taxes’ instead, while Boris Johnson has only just returned from sunning himself on holiday.

Putting Cleverly to task on the issue, Madeley said the support package he was quoting simply is not enough because the figures have changed.

The education secretary fired back that he “kept getting interrupted” in response, but Madeley tactfully responded:

“If you’re not answering the question, you will be interrupted and I’m sorry if that’s too hard for you but that’s how it works.”

Related: Sturgeon says Truss asked her about how to get into Vogue magazine