"The uncertainty, the sleep deprivation and the knowledge at any time you may be called into action. Spare a thought for Liz Truss' personal photographer today." 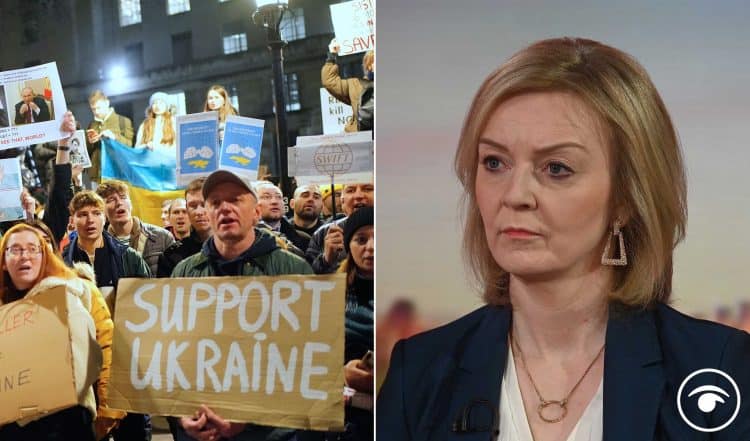 Liz Truss has been criticised for saying she would back Britons going to Ukraine to join the fight against the Russians, with Conservative colleagues saying this would be reckless and illegal.

Ben Wallace, the UK defence secretary, contradicted the foreign secretary’s assertion that Britons should be able to join the fight in Ukraine, saying this was primarily for Ukrainian nationals and that people without military experience should stay away.

Truss told BBC One’s Sunday Morning programme that she would “absolutely” back anyone wanting to volunteer to help the Ukrainians fighting for their freedom.

She said: “That is something people can make their own decisions about. The people of Ukraine are fighting for freedom and democracy, not just for Ukraine, but for the whole of Europe. Absolutely, if people want to support that struggle, I would support them in doing that.”

The Foreign Enlistment Act of 1870, prohibits British people fighting in foreign wars against countries the UK is at peace with.

“There are certainly laws restricting who you can go and fight for already”, Mr Davis went on, noting that “people fought on various sides of the Spanish Civil war without being penalised when they came back”.

Also Dominic Grieve said” “The comments of the foreign secretary may be entirely honourable and understandable, but unless the UK government gives formal licence to people to go to Ukraine, they would be in breach of the Foreign Enlistment Act and committing a criminal offence.”

Well from that car crash interview, she went off for another photo opp, this time wearing what appears to be an RAF helmet.

Related: Truss summoned Russian ambassador to meet her and everybody said the same thing