Jurgen Klopp said country leaders should not be voted in based on who is the “most funny” or has the “weirdest haircut”. 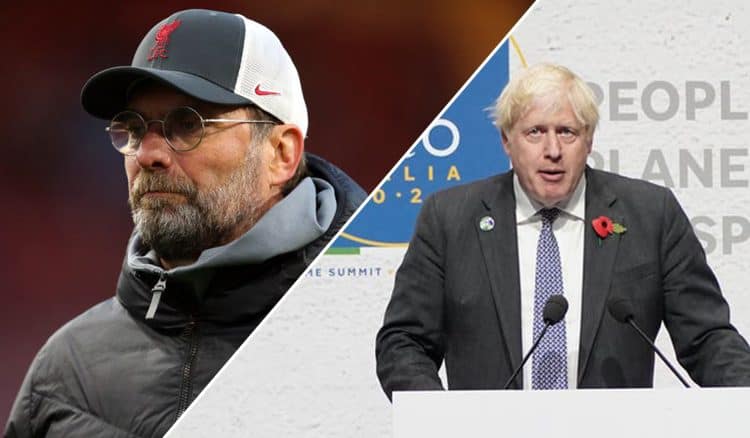 Jurgen Klopp said country leaders should not be voted in based on who is the “most funny” or has the “weirdest haircut”, whilst also having a pop at Brexiteer Nigel Farage.

“Why do we let people like Farage and Johnson lead any kind of group of people in any direction?” Klopp asked.

He added: “Obviously people with common sense are not needed or used at least in this town. They should be but that’s the problem, the people we vote for or the whole system that gives us the opportunity to vote for these kinds of people.

“I have to say at the last two elections, first with Donald Trump and Boris Johnson, that’s really a bad sign for the whole world that this can happen because everybody knew beforehand that it will not work but we still let it happen as a society and I cannot believe that.”

Klopp admitted leading a country is not a “nice” or “easy” job.

“That’s probably why not a lot of people fancy it because it’s pretty intense and when you have a few days holiday everybody says “well you should solve that now,” he said.

He added: But that’s why we have to find a system where we can bring people in the position to solve all our problems [who] are the best possible people and not the most funny or the weirdest haircut or whatever.

“You can make a mistake but you have to learn from it and hopefully we learn.

“There are people out there definitely, we just have to give them a platform.”

The attack towards Boris Johnson comes after Green MP Caroline Lucas said last week that the prime minister  is “the biggest problem of all”.

During BBC’s Question Time, the Green Party MP accused the prime minister of caring “nothing” about Parliamentary standards, decency and the rule of law.

Meanwhile, a poll from last night handed Labour a six-point lead in the wake of the Tory sleaze scandal.

The survey for the Daily Mail revealed the scale of public anger over Boris Johnson’s handling of the crisis.

According to the Savanta ComRes survey, a three-point Conservative lead last week has become a six-point deficit in a dramatic turnaround.

Chris Hopkins of Savanta ComRes said: “These latest poll numbers are obviously striking, and while recent polls have begun to show slim Labour leads, none have been quite as comprehensive as this one.”

Mr Hopkins said Labour still faced an “uphill” battle because some disaffected voters were switching to the Lib Dems and Greens.