"In France and Germany they're seizing super-yachts. In London... nothing." 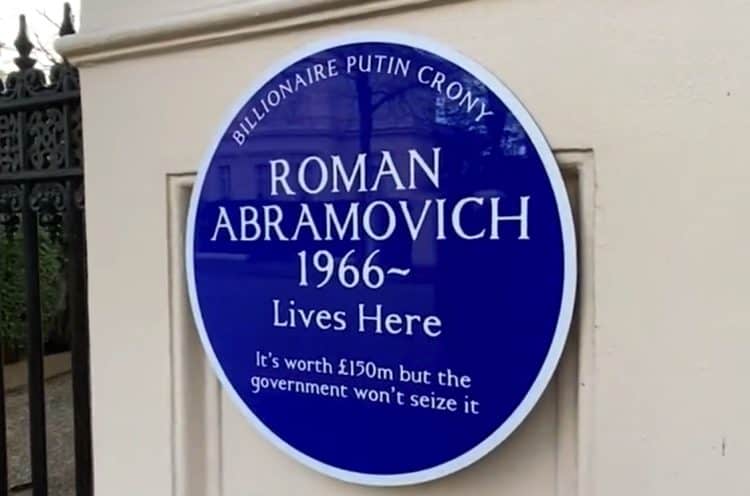 Campaign group Led By Donkeys has distributed blue plaques across London to draw attention to how many Russian oligarchs still own property in the city.

Russian billionaire Alisher Usmanov became the latest to join the UK’s sanction list to pile pressure on Vladimir Putin over his “barbarous” invasion of Ukraine, taking the total number of oligarchs sanctioned to 15.

Boris Johnson said: “For as long as Putin continues his barbaric attack on innocent Ukrainians we will continue to exert every power we have to inflict maximum economic pain on Putin and his war machine.”

But Roman Abramovich, who says he will sell Chelsea FC, was not among the latest tranche of sanctioned oligarchs.

Government sources conceded it could take “weeks and months” to build legally sound cases against wealthy and litigious targets.

The latest sanctions followed calls from senior Tories for the Government to do more, including seizing assets of Putin-linked oligarchs including luxury yachts and property.

Tom Tugendhat, chairman of the Commons Foreign Affairs Committee, told the PA news agency: “We should be looking immediately to seize those assets linked to those who are profiting from Putin’s war machine, holding it in trust and returning it to the Russian people as soon as possible.”,

Commons Defence Committee chairman Tobias Ellwood echoed the call, warning there would be “increasing public anger that we’re not doing enough to help our fellow Ukrainians in their hour of need”.

He told PA: “There’s a race to squeeze Putin given the war crimes he’s now committing in Ukraine and London continues to be seen as ground zero as to where oligarchs’ investments sit. So we need to be impounding these assets in days, not weeks or months.

“Every day we wait offers more time for the oligarchs to move their wealth to other parts of the world. Don’t forget it’s not their wealth, this is the stolen wealth from the Russian people which is utilised to keep Putin in power.”

Led By Donkeys took to the streets to voice their displeasure with the slow response.

Blue plaques denoting ‘billionaire Putin cronies’ were placed on London properties, including that of Abramovich who owns a 15-bedroom mansion at Kensington Palace Gardens, which is valued at upwards of £150 million.