Police say three men - aged 20, 21 and 25 - were treated for stab wounds at a north London hospital following the incident in Edmonton, north London 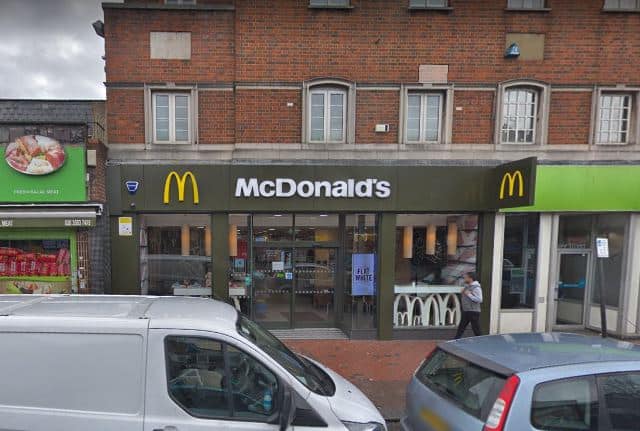 Knife-wielding thugs wearing masks and scarves over their faces stabbed three diners in front of “terrified” families at a busy McDonald’s restaurant.

It is the second time this month the same fast food restaurant has been hit by a bloody knife rampage.

Horrified parents and their children ran screaming from the diner following the attack in Edmonton, north London, on Thursday afternoon.

Police say three men – aged 20, 21 and 25 – were treated for stab wounds at a north London hospital, but have since been discharged.

But local police have launched a large scale ‘stop-and-search’ operation to prevent possible reprisal attacks amid fears the incident was part of an ongoing gang war.

Detectives are appealing for witnesses following the triple stabbing just before 5.30pm on Thursday at the McDonalds restaurant in Fore Street.

They are particularly keen to trace a smartly dressed elderly man who narrowly avoided injury after being caught up in the fracas.

Police say that a gang of six or seven youths armed with “large knives” entered the diner at around 5.15pm that afternoon.

They attacked a group of four men who were sat eating, three of whom were stabbed.

The suspects were all described as black, of slim build and aged 16 to 20. They were wearing dark clothes and had their faces partially covered with masks and scarves. Some of them were carrying bags.

Detective Inspector Paul Ridley, of the Met Police’s North Area CID, said: “This was an extremely concerning incident which took place in the middle of a bustling restaurant.

“Terrified young families and elderly people were forced to flee from the disorder as the males were indiscriminately wielding these lethal weapons and attacking the victims.”

He added: “It is crucial that any witnesses in the restaurant at the time come forward to my investigation team.

“I particularly want to hear from an elderly gentleman who was caught in the middle of the disorder and was very close to being seriously injured by one of the knifes.

“I am acutely aware of the community concerns and the public can expect to see increased police visibility patrols in the area.”

The same branch of McDonalds witnessed a bloody knife brawl late on the night of Saturday January 12.

At least three thugs armed with what appear to be large knives rushed into the restaurant and attacked two victims.

Police were called to the knife brawl at 11.46pm.

This horrific footage of the brawl in front of horrified diners was captured:

Anyone with information is asked to contact North Area CID via 101 or via Twitter @MetCC quoting CRIS: 5202194/19.

If you are aware of any knife carriers then report to police or anonymously via Crimestoppers.