Last month, Kanye, 42, claimed that the living spaces he had designed could be used to house the homeless. 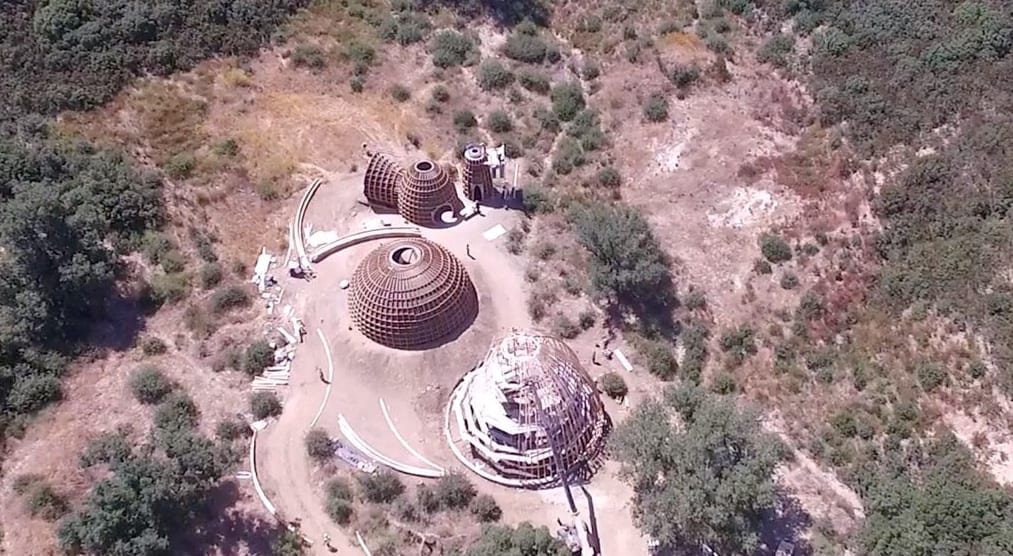 Kanye West’s STAR WARS-inspired social housing project has been photographed from the air.

The exclusive images show three wooden spaceship-like structures in the Calabasas hills in California, USA, near where Kanye and wife Kim Kardashian own a $60 million house.

The otherworldly, domed buildings, which are still under construction, bear a resemblance to the Star Wars hero’s igloo-like home on the planet of Tatooine in Episode IV – A New Hope.

Last month, Kanye, 42, claimed that the living spaces he had designed could be used to house the homeless.

He suggested that the prefabricated units could be sunk into the ground with light filtering in the top in an interview with Forbes magazine.

Kanye has long been a fan of the Star Wars films, referencing the cult franchise in his lyrics.

The star even dressed Kim as Princess Leia in his 2004 Comedy Central pilot Alligator Boots.

Our source, who was staying with friends in Calabasas, captured the images on July 11 via drone after becoming curious about the extensive construction.

They said: “The nicest part of town is where everyone knows that Kim and Kanye have their home.

“The neighborhood was having issues from the second Kanye started doing stuff.

“It’s a quiet, residential neighborhood and Kanye bought all the land on the other side of the street.

“He bought a house and built a recording studio and a stage.

“The first thing he tried to do was a hip hop Sunday church service.

“Everyone could hear it.”

The source claimed that the service, an invite-only musical gathering, caused chaos in the neighborhood, with residents unable to park on their street.

“There are a lot of old people in that neighborhood, their kids have gone to college, it’s not a twenty-something neighborhood,” the source said.

“They couldn’t even get to their street to park.

“They all complained about it.”

The source alleged that the service stopped in that location as Kanye did not have a permit for the gathering.

“But then construction started going on up and down the street,” the source added.

“Nobody could tell what he was building.

“Everything was behind the house.”

Using a drone with a go-pro attached to take images of the construction, the source was perplexed by the domed buildings in the pictures.

They said: “We didn’t know what it was.

“We thought it was huts or yurts, but they were circular.”

An article about Kanye’s architectural plans for low income housing convinced the source that the spaceship-like buildings were his prototypes for the project.

Kanye announced on Twitter last year that he was starting an architecture arm which he would call ‘Yeezy home’, in addition to his fashion and music empire.

He put out a call for architects and designers to join him on the project and “make the world better.”

Kim and Kanye famously sent out private firefighters to protect their Calabasas home during the 2018 California wildfires.

The private firefighters also ensured that the surrounding houses were untouched by the rampant forest fires.