“I was just doing my job. What’s also terrifying is what this means for press freedom. It was blindingly obvious I was a reporter.” 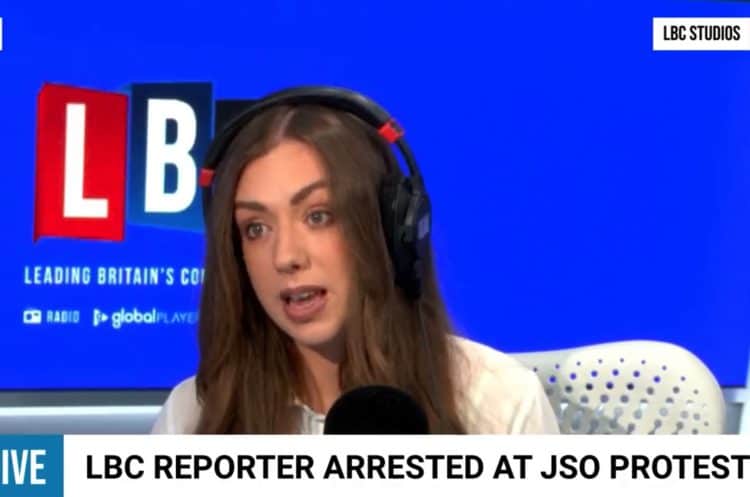 A radio journalist has spoken of the “terrifying” five hours she endured in a police cell after being arrested while reporting on a Just Stop Oil protest.

Charlotte Lynch, of LBC, had been reporting on the activists from a road bridge over junction 21 of the M25, in Hertfordshire, on Tuesday, for around 45 minutes when she was approached and questioned by two officers.

After showing them a press card and having explained she was reporting on the demonstration, the officers handcuffed her, took her phone and arrested her on conspiracy to commit a public nuisance.

It comes after a photographer and filmmaker said they were held in police custody for around 13 hours for covering a protest staged by the group.

Ms Lynch said she was searched on the side of the road, before officers seized her devices and took her to a police station in a custody van.

She said: “Got to Stevenage police station, that journey took over an hour because of the M25 being closed.

“I was in the back of a police van, handcuffed, my hands were in front of me, handcuffed the entire time, on my own, the two police officers were behind the glass cage.

“That’s when it dawned on me ‘gosh, I could be charged here’ and everything runs through your mind ‘have I actually committed this offence?’ even though I knew I hadn’t.

“We got to the police station and I thought I’ll answer their questions and I’ll be on my way.”

She then told of being taken to a cell and detained for five hours before officers released her with no further action.

They wanted to know how Ms Lynch knew about the protest, she said.

Ms Lynch said: “It was absolutely terrifying being in a cell with a pad for a bed in one corner and a metal toilet in the other.

“I was just doing my job. What’s also terrifying is what this means for press freedom. It was blindingly obvious I was a reporter.”

“I was just doing my job”

Documentary maker Rich Felgate and photographer Tom Bowles had been capturing the activists on a footbridge over the M25 near Kings Langley, Hertfordshire, at close to 11am on Monday when they were handcuffed.

The pair, both of whom say they have no affiliation with the group, had their equipment seized and were taken to a police station, despite efforts to show their press cards.

Mr Bowles, 47, from Hackney, east London, told PA he was held until 1.30am, hours after his wife and 14-year-old daughter were woken up as three officers searched their home.

Former shadow attorney general Baroness Shami Chakrabarti told LBC: “If the police are now going to start arresting journalists for conspiracy to commit a public nuisance – in other words for knowing that a demonstration is about to take place – then they are effectively shutting down the free press, the free media, in this country.

“So this is very, very serious.”

Conservative MP for Boston and Skegness Matt Warman, said on Twitter: “It’s extremely hard to understand why the police would arrest a journalist. I hope a fuller explanation or an apology is provided very rapidly.”