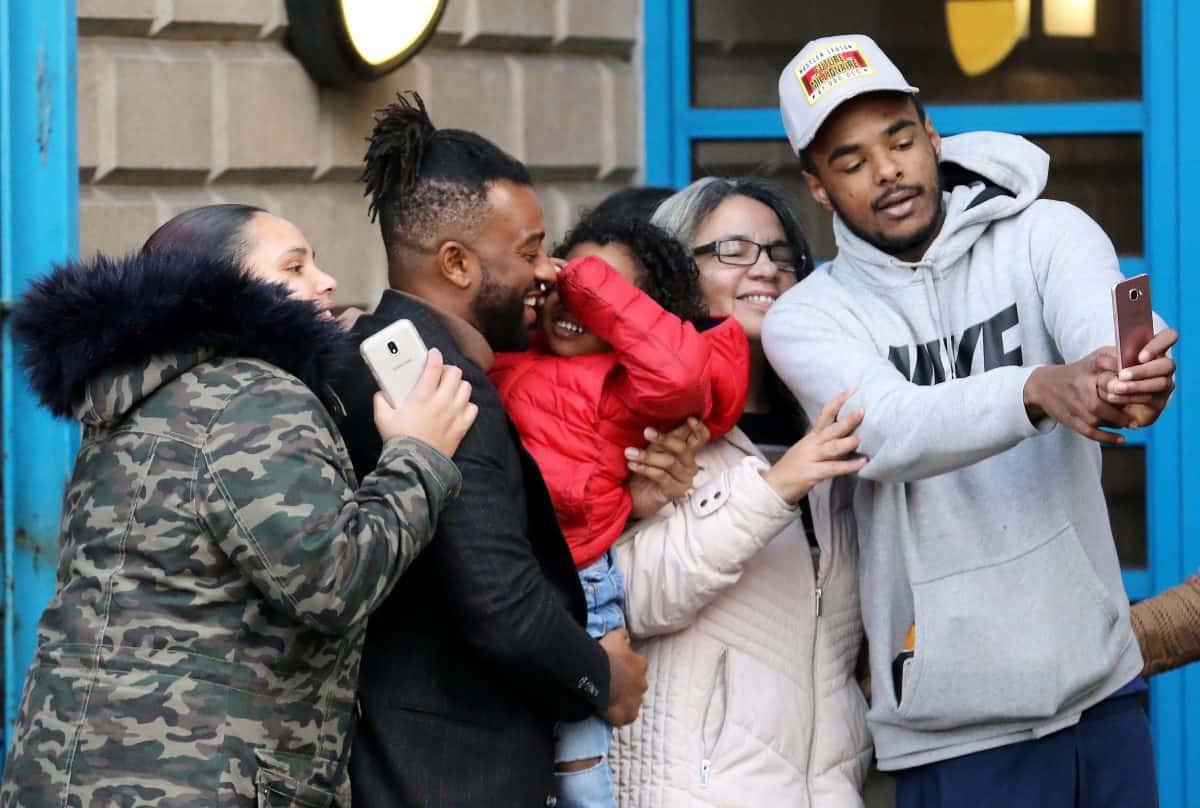 JLS star Oritse Williams was today cleared of raping a female fan in his hotel room – after a jury took less then three hours to find him not guilty.

The 32-year-old singer was accused of launching a sex attack on a 20-year-old waitress after plying her and two pals with booze after a gig.

Friend and tour manager Jamien Nagadhana, also 32, was charged with sexual touching and assault by penetration of the same woman.

The woman accused the men of abusing her after luring her back to their room in Wolverhampton’s Ramada Hotel on December 2, 2016.

Williams always claimed sex was consensual but admitted he struggled to perform due to being drunk which he said was “embarassing”.

A jury of eight women and four men took two hours 17 minutes to find the men not guilty of all charges following a nine-day trial at Wolverhampton Crown Court.

Williams, of Croydon, wearing a black suit and tie with a white shirt, breathed a sigh of relief in the dock when the jury recorded their verdict.

Nagadhana, of Hounslow, wearing a brown corduroy jacket and beige sweater, nodded when he heard the second of his not guilty verdicts.

Judge Michael Challinor said: “The defendants can be discharged

“You have been found not guilty. That brings the matter to a conclusion.

“You may leave the dock.”

Jurors heard the woman and two friends had queued to meet the pop star to have their picture taken “for a joke” after he had performed at the city’s Gorgeous nightclub.

Williams told one of the girls she “should be a Victoria’s Secret model” before he gave them free alcohol and they spent the the night “dancing and mucking about” in the VIP area.

The victim could be seen bouncing on Williams’ lap and snogging a female pal as they downed shots in the nightclub.

Williams was captured on CCTV slapping the woman’s bottom as they danced together in the VIP area hours before the sexual encounter.

At the end of the evening, one of the women went home in a taxi while the two remaining friends went back to the city’s Ramada Hotel with Williams.

The girls ended up in the room that the former JLS singer was sharing with Nagadhana and at one point started cuddling on the bed, jurors were told.

Williams was accused of taking this opportunity to try and have sex with one of the girls, who were described by hotel staff as looking “spaced out and zombified”.

Both women ran out into the hotel corridor.

One of them returned to the room as she had lost her phone, and it was at this point that Williams was alleged to have raped her.

But he insisted she said she wanted to spend the night with him, and when he asked her if he should get a condom, she smiled and said “yes”.

Nagadhana was accused of joining in while Williams was having intercourse with her, and “put his finger up her bum”.

Nagadhana said he touched her in the vaginal area but stopped when it became clear neither of them was enjoying it, and went back to the single bed.

The victim said she told the pair to “p**s off” and “f**k off” but had not been as “fighty” as she could have been before she ran from the room crying after several minutes.

Hotel staff put the woman into a room so she could calm down, where she curled up in a ball and then said she had been sexually attacked.

Police were called and both Williams and Nagadhana were arrested.

David Bentley, defending Nagadhana, previously told the court: “There may be many reasons why a person makes false allegations.

“But we say these are false allegations levelled at these two men.

“Whatever her reasons for saying the things she has said, it is not for the defendants to say why that is.

“The victim was happy to be in the room with these two men and consented to what took place in that room.

“When asked by officers what happened, the victim said ‘nothing’ and then ‘oh god, nothing bad’.

“Is that her conscience? Things were taken out of her hands.

“She then says ‘they were all great guys’. I submit these are unusual comments.”

Williams set up a music firm and sang solo under stage name OWS after the band split in 2013.

Williams denied acting like a “sexual predator” after the three girls put on a “highly charged sexual display” in the nightclub’s VIP area.

The pop singer told the court he “absolutely” did not rape the woman in his hotel room following one of his solo concerts.

Taking to the stand , he had told jurors how he was the driving force behind setting up JLS and recruited the other members of the band.

He said he was motivated to set up the band as his mother was diagnosed with MS when he was 12 and he became her carer.

Williams said the X-Factor was the “quick route to success” he needed in order to pay for her treatment.

He told jurors he had been promoting his new single ‘Waterline’ on the night the alleged incident took place.

Giving evidence in the dock, wearing a black suit and black tie, Williams said: “My performance at the nightclub in Wolverhampton was to show off that single.

“I did the same with JLS, we did meet and greets after tours and performances.

“It benefits the performer as you get a one-on-one with your fans, so it can create a buzz on the circuit.

“The fans have the opportunity to take selfies and tweet that they have met you.”

Describing the moment he met the woman and her two pals, he added: “They seemed very excitable, very loud.

“They came in, asked for drinks and I was happy to share. I liked the three girls.”

Williams said there was flirtation between himself and the alleged victim, adding: “We were getting on really well.”

Her two friends began dancing “out of the blue” and Williams said things soon got “quite raunchy” which he was “loving”.

Williams told the court: ” It did get me excited.

“Things got raunchy and I did not instigate that, it did make me excited, I was loving it.

“The three of them sat on my lap and were bouncing on me but I didn’t instigate that.

“I don’t think I would need the CCTV to remind myself of three girls grinding on me, it’s not something you forget.

“When I was JLS and did these sorts of things I never had three women grind on me.

“I’ve never had girls touch and kiss me in a meet and greet before, it came out of the blue.”

Williams said the three pals were “putting on a highly sexually charged display” and added: “It definitely caught my attention.”

He remembered the alleged victim sitting on his lap of her own accord and added: “”I wasn’t being a sexual predator or being weird.

“I remember the girls showing off how they had a sexy bum and they started to stand up and twirl.

“I did become involved in a three-way kiss with the woman and her friend.

“I did kiss the woman on her own.

“I told the woman I was going to leave and at that point she said she wanted to come back with me.

“I thought the highly charged sexually, seductive behaviour was going to continue at the hotel.”

Williams said the waitress led him out of the club by his hand and back at the hotel the girls were “giggling, giddy, loud”.

He said: “In the taxi was cuddled up close to the woman and we were kissing, I had my hand on her leg.

“The two girls were giddy. I was aware of the possibility that there might be some sexual intercourse.”

He said the girls went to the bathroom and when they came out they were talking about their bisexuality before they abruptly left.

Williams added: “I didn’t see them leave the room and I didn’t expect them to and they didn’t take their belongings.

“I poked my head out of the door and asked them if they wanted to collect their stuff as I thought they were leaving.

“I didn’t get a response I just heard a lot of noise and went back into the room.

“Jamien was in his bed under his covers.

“I just lay on bed, the next thing I remember was a knock on the door, I answered it and the woman was standing there.

“She said to me she didn’t want to leave and wanted to spend the night with me.

“I was ok with that, she came into the room and I shut the door, she then put her arms around my neck and started to kiss me, she then wrapped her legs around my waist and squeezed tightly.

“I then got a condom and we had sexual intercourse in a number of positions, I didn’t ejaculate.”

Williams said he embarrassingly was “unable to maintain an erection” due to the amount of booze he had consumed.

He added: “I don’t usually drink if I know I’m going to have sexual intercourse.

“It stopped because I couldn’t maintain an erection.”

He helped her look for them and found one phone before she thanked him and left, he claimed.

Williams said: “I thought it was all good and then I went back to sleep.

“I was woken up by another knock at the door and it was the police.

“I was taken to the police station and interviewed. The police took my phone.”