It has been a tough week for the Daily Mail

The right-wing newspaper has been hit by three bits of bad news this week, and they're really not taking it well.... 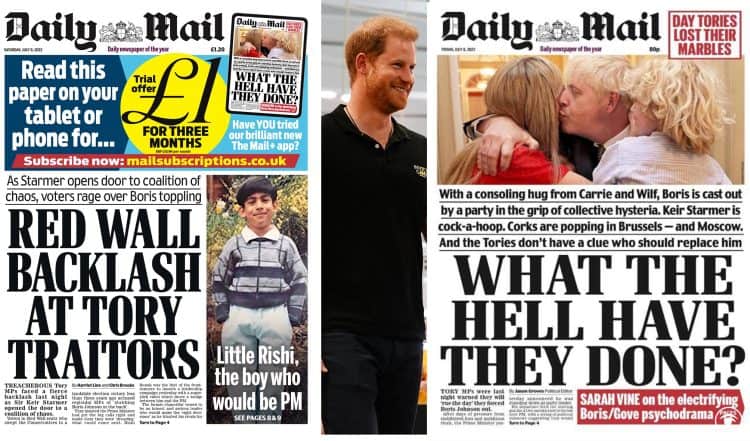 The Daily Mail splashed a photo of a young Rishi Sunak on its front page today followed by news of a “voter betrayal” as rumours of a Lab/ Lib Dem coalition surfaced.

On Thursday, Boris Johnson, the man who they had championed for so long, was forced to resign as prime minister after a flurry of resignations over the Chris Pincher affair made his position untenable.

Ironically, it could well be that the Daily Mail actually hammered the last nail into his coffin after revealing that Boris knew about ‘groping Tory’ Pincher two years ago.

Regardless, the right-wing newspaper reacted angrily on Friday morning, splashing “What the hell have they done” as they responded bitterly to Johnson’s demise.

Within the paper, they claimed Britain will now “be ruled by the Blairite Left” and that “Gulliver has fallen” after being “downed by a devil’s bargain”.

No sooner had Johnson’s resignation come through had Sir Keir Starmer been let off by Durham Police.

The Daily Mail had pushed the allegations in several editions as it rounded on the Labour leader, prompting him to commit to resigning if any wrongdoing was established.

A May 10th front-page said Starmer had “piled pressure on the police” with the commitment because detectives now know that any decision would have “major political ramifications”.

The final bit of bad news for the Daily Mail came on Friday after Prince Harry won the latest stage in a High Court libel claim.

Harry is suing Associated Newspapers Limited (ANL) for libel over a February article about his legal battle with the Home Office.

His barrister said the story falsely suggested he had “lied” and “cynically” tried to manipulate public opinion.

But ANL said it contained “no hint of impropriety” and was not defamatory.

The High Court ruling is the first stage of the libel battle, which aims to establish what the article meant and what claims the newspaper group will have to defend.

The court will decide after further hearings whether the duke’s libel case succeeds or fails and why.