Residents at Longbeach Leisure Park, Hornsea have been left in panic after a huge 50m crack appeared just metres from their doorsteps at the cliff edge 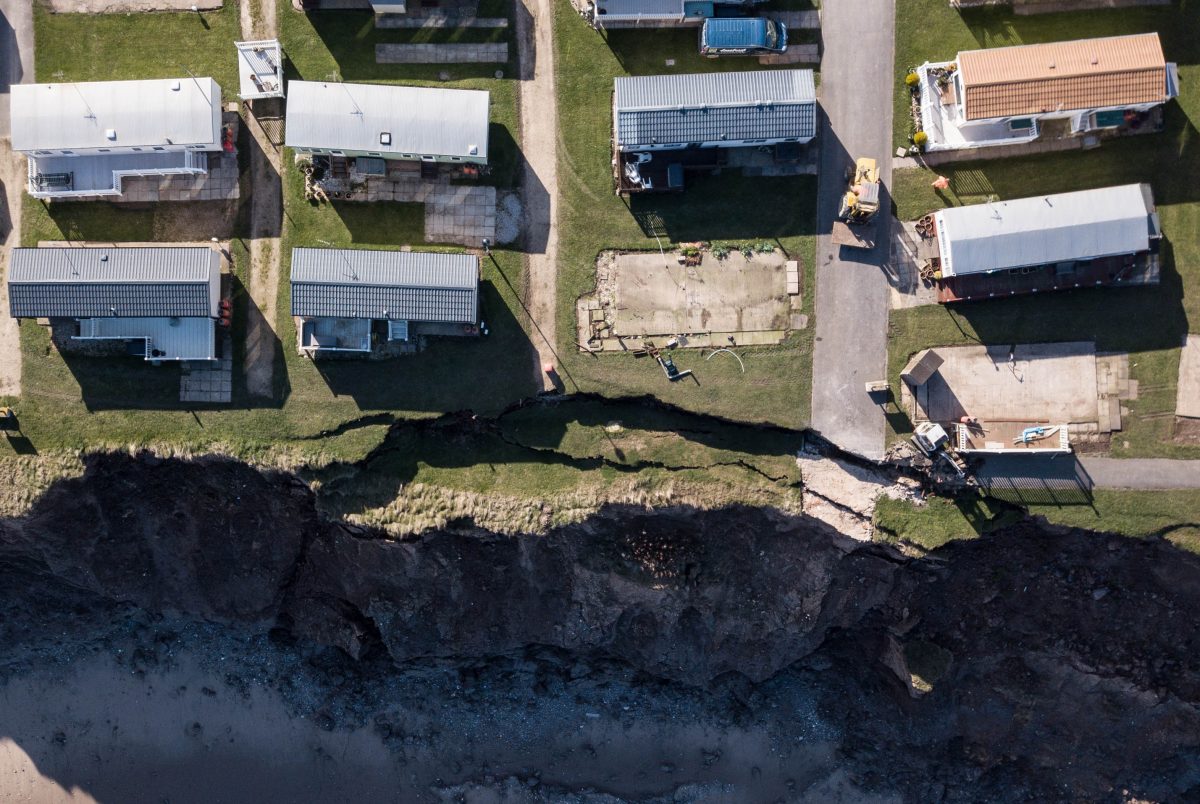 Dozens of expensive holiday homes are shown teetering perilously close to a cliff edge in these stunning images captured by drone.

Owners of holiday caravans worth between £40,000 and £100,000 were shocked to find a 50 metre long crack had opened up along the cliff edge just yards from their homes.

Now many of the properties at Longbeach Leisure Park, Hornsea, North Yorks, will have to be moved before they plunge onto the beach below.

The photographs show the worst crack in the cliff top – caused by coastal erosion – ever seen according to some holiday home owners.

The coast is eroding at a rate of 2.3m per year according to the local council – who now say there is a “need to relocate or remove caravan pitches from the site”.

Bosses at the holiday home site – which has properties ranging from £40k up to over £100k for top of the end lodges – have had to relocate 12 homes so far this year due to the shocking change in the cliff face.

One homeowner – Jenny Speight, 71 – has owned four different properties on the site in the last 33 years.

Just five years after purchasing the high-spec home which lays directly on the coastline, Jenny was given the devastating news she would have to relocate as soon as possible in January.

Mrs Speight, 71 – who visits the £45k property most weekends with husband Brian Speight, 76, from their home in Bradford, West Yorks., – has been offered a plot further away from the cliff edge.

The couple, who are both retired, are now beginning to to pack up their belongings before being relocated.

She said: “I thought we would at least see the year out here but with the weather and how quickly the cliff is eroding, we have been told we need to get out as soon as possible.

“Our home is directly on the cliff front so we have the best views possible, the views are incredible.

“We knew when we bought the home this day would come but we didn’t think it would be so soon.

“We have been on the site for 33 years and seen many changes but this is the worst the erosion has ever been.”

Work is now due to begin on dismantling the couple’s property – which includes top of the range decking and skirting.

Mrs Speight added: “It is very annoying as we are going to lose the direct sea view.

“It could be as soon as this weekend when the work begins, we are thinking of going to help get everything together.

“Thankfully the new plot has become available which is not very far away but we will have to walk to get the same view now which is disappointing.

“At least the homes can be transported, if they were made of bricks and mortar it would be much more difficult.”

Mrs Speight said “helpful” management at the site and the local council had contacted them at the start of the year and they had since secured another plot two rows back.

The couple now believe they can remain at the new property for the “foreseeable future” – at least the next 15 years.

A spokesman for East Riding Council said: “While the existing coastal defences in Hornsea protect part of the Longbeach site from erosion, to the south of these defences, the coast is eroding at a rate of approximately 2.3 metres a year, with a maximum individual loss of 8.76 metres.

“Over time, this erosion, which is monitored regularly, has resulted in the need to relocate or remove caravan pitches from the site.”