The unprecedented walk out will see them leave patient bedsides with the support of thousands of other healthcare workers. 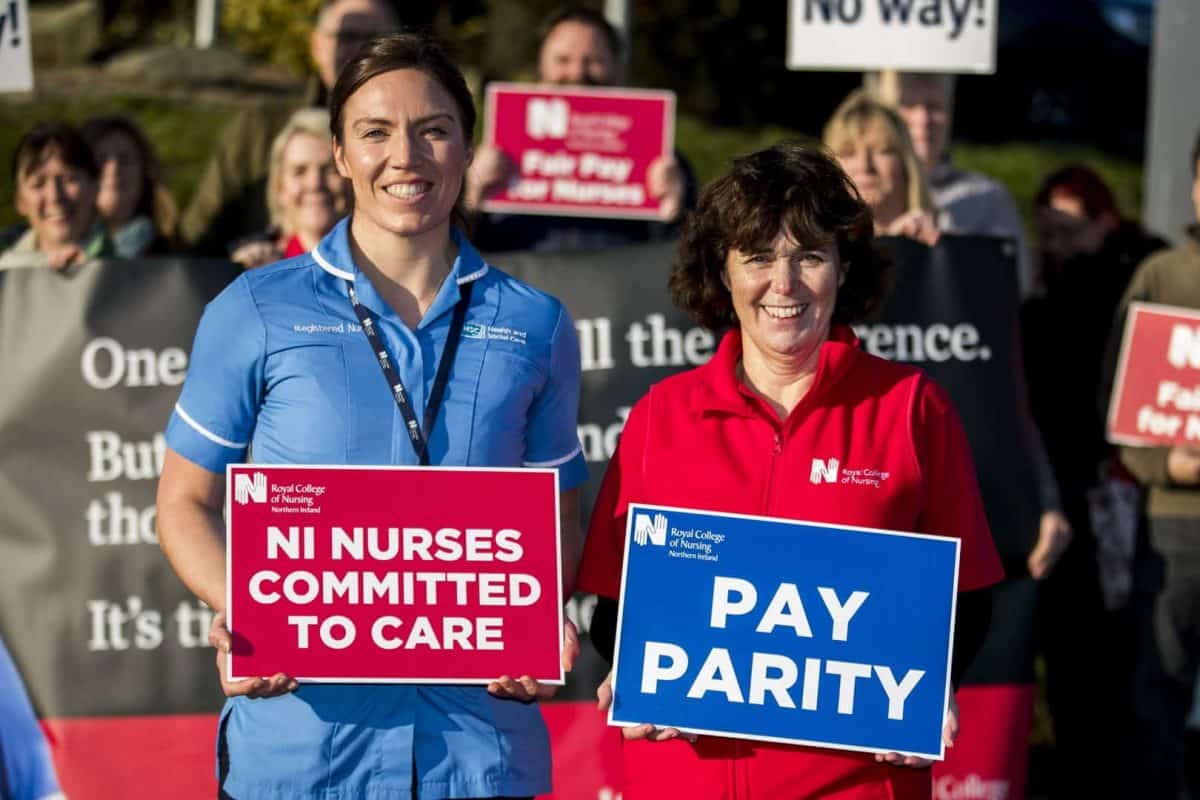 In a crisis highlighting the crises that his government has become embroiled in, Boris Johnson and his Northern Ireland Secretary are facing a walkout on Wednesday of around 9,000 nurses .

The nurses will take the UK’s first 12-hour strike action over pay. The unprecedented walkout in Northern Ireland will see them leave patient bedsides with the solidarity of thousands of other healthcare workers.

Routine medical appointments will be cancelled, minor injury units closed and there will be delays to some ambulance responses. Nurses in Northern Ireland are paid less than counterparts in England and Wales.

Around half are considering leaving the profession because of pressure caused by under-staffing, a union said.

Dame Donna Kinnair, chief executive and general secretary of the Royal College of Nursing (RCN), said: “This is a moment that every nurse wishes had never come, but faced with an abject failure to tackle unsafe staffing levels and severe pay inequality with colleagues from across the UK, our members in Northern Ireland are saying enough is enough.

“Nurses are taking a stand for their patients, and also for their colleagues, and it is about time that the powers that be finally sat up and took notice because the crisis in the HSC cannot be allowed to continue.

“To every one of our members in Northern Ireland taking this stand, I want you to know that the RCN, and its entire membership, are right behind you.”

The health authorities are unable to break the deadlock since no ministers are in place to take decisions at the devolved parliament at Stormont.

A newly-qualified registered nurse in Northern Ireland earns £1,875 less than in Scotland and £1,419 less than in England and Wales. For a specialist nurse, the difference is up to £4,677, the RCN said.

Northern Ireland Secretary Julian Smith has said finding a solution will be among his top priorities during talks he has called with the local political parties. Sinn Fein and the Democratic Unionists, Northern Ireland’s two largest parties, suffered some reverses in last week’s General Election.

They face another Assembly election if they do not agree by next month to return to powersharing and retake the tiller over increasingly-stretched public services.

Nearly 300,000 people in Northern Ireland were on a waiting list for a first appointment with a consultant, according to Department of Health figures published last summer.

Industrial action is also planned on Wednesday by the Unison, Unite and Nipsa trade unions which cover ambulance paramedics and jobs like cleaning, portering, catering and administration.

A spokesperson for Health and Social Care (HSC) organisations said: “Regrettably, as a result of the widespread nature of the strike, numerous appointments and treatments have been cancelled and many services across our hospitals and the community care sector have had to be stood down or reduced.

“We sincerely apologise in advance for the distress this action will cause to everyone impacted especially our patients, service users and family members.”

All emergency departments will remain open as normal.

The Northern Ireland Ambulance Service will be prioritising 999 calls and those calls which are less serious in nature, potentially, face a delay in response times.