By Nathan Lee, TLE Correspondent  Bargain hunters bagged hundreds of cheap deals this week in a bizarre auction at Edinburgh Airport. Security scanners, a fire engine and two planes were just some of the items which went under the hammer for “scrap value” as airport chiefs flogged off their old equipment. The auction of redundant equipment included arrival […] 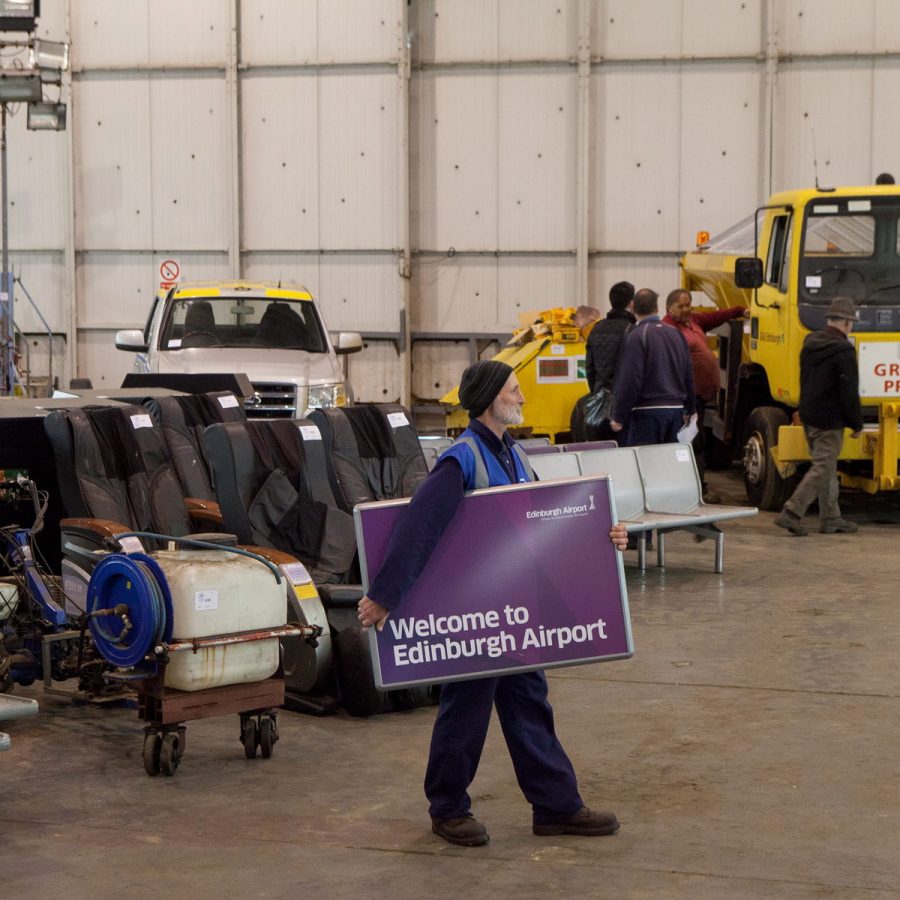 Items from Edinburgh Airport are to be sold at auction by Wilsons Auctioneers on 6 May. Everything from a fire engine to security trays. May 5 2015 See Centre Press story CPSALE

Bargain hunters bagged hundreds of cheap deals this week in a bizarre auction at Edinburgh Airport.

Security scanners, a fire engine and two planes were just some of the items which went under the hammer for “scrap value” as airport chiefs flogged off their old equipment. The auction of redundant equipment included arrival and departure signs, airport vehicles, terminal seating and two old Fokker 27 aircraft used for fire training.

The hangar at Edinburgh airport, full of more than 400 lots, also included the sale of airport roller tables at £30 each and computer monitors that cost £2 for three. Ian McDonald, 47, from Haddington, East Lothian, said he only heard about the auction on the radio and came down to see what he could find.

He said: “I bought three surfboards for £50 each and a printer for a pound. Most of this is not really my thing. Some of it will be for myself and some of it I will sell on. I’ll keep one of the surf boards and try sell the other two.

“I thought there would be a few more people. Some things are not even reaching scrap value. There’s a lot of bargains here. Some of the conveyor belts are going for £10 or £15. It’s crazy.” David McVey, 54, from Paisley, spent £545 all together at the auction but believes he will make that money back when he goes to sell his items on.

He said: “I bought some cabinets for £2 each and lots of scrap metal. I bought lots of the trolley link locks for £14 but I don’t know what I’m going to do with them.

“I’ve spent money on six or seven lots. It’s been a good day so far. I’ll sell some of it on and scrap some of it.”

Provisional offers of £500 and £750 were put in for the two old Fokker 27 aircraft used for fire training, but have yet to be confirmed by Edinburgh Airport who will review the offer. If the offers are successful, the airport will make special arrangements for the buyers to view their purchase as they are situated on the airside of Edinburgh airport. Security scanners, valued at an estimated £20,000, were sold provisionally for as little as £5,000. They also will have to be confirmed by airport bosses who will decide if they can be sold for that price.

Edinburgh Airport expected to make several hundred thousand pounds from the sale, which will be used to fund future improvements. Robert Fleming, 28, who works with a winter maintenance company, grabbed a bargain as he bought a snowplough, valued at more than £10,000, for £2,600.

He said: “It goes on the front of a small truck. We already have a snow blower already and now we’ve bought this one.

“So this one will come in helpful, we’ve got it for a good price, it was a bargain.”

Robbie Ralph, 25, came up from County Durham, England, to find a bargain. He managed to get his hands on a vehicle that grits the airport runways, valued at £4,000 for just £800.

He said: “We’ve got a real good deal there. It’s been good so far, we bought a load of the roller tables and put money on about 300 lots.” Commercial manager, Bob Chambers of the Ayrshire-based Wilson Auctions, which is organising the event, said it was a good turnout with all 450 lots being sold.

He said: “The day went well. The thing with these types of auctions is the amount of specialist equipment. You need to attract that specialist buyer.

“We’ve got bids on some of the specialist items that we need to take to the airport who will consider whether to accept the bids or not, these are called provisional bids.

“The old gritter and the snow blower and the vehicles have all been sold, so all in all it’s been a good and successful day.

“It wasn’t a bad turnout considering the weather and the location.”

The auction had been expanded after being originally organised to offload to airport equipment and fittings from its old security hall.