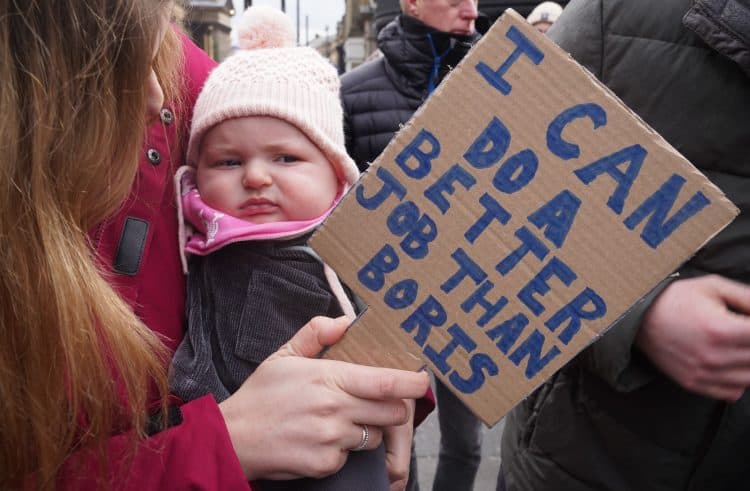 Protests are being held in several regions to highlight the impact of the cost of living crisis on workers and their families.

The People’s Assembly co-ordinated the demonstrations, supported by trade unions, in towns and cities around the UK.

Placards held aloft in Parliament Square in central London read “tax the rich” and carried other messages objecting to a rise in energy prices.

In Newcastle, a placard referred to “Tory tricksters”, while another sign held near a baby said “I can do a better job than Boris”.

FLaura Pidcock, national secretary of the People’s Assembly, said there is “real anger” at what she described as a “growing crisis”.

The former Labour MP added: “Working people could not be working harder and yet life is getting so much more difficult.

“People can see clearer than ever the inequality in our society, that while there are companies making massive profits and the richest individuals are getting so much richer, everybody else is having to suffer, making very difficult decisions to try and get by.

“Meanwhile, the Government sits by and does nothing to help the people. So, we will be out on the streets saying enough is enough.”

Sharon Graham, general secretary of Unite, said protests are taking place because “people are fed up of rich men telling them that they have to pay for boardroom greed and colossal market failure”.

She said: “This crisis was not caused by working people and we are not going to take wage cuts to pay for it.

“Why should the public always bail out the markets and policy makers? Where firms can pay, they should pay and under my watch Unite will unashamedly continue to protect the living standards of its members.”

Fran Heathcote, president of the Public and Commercial Services union, said: “Low-paid workers cannot and will not pay for the Government’s problems.

“The hike in heating bills, fuel, transport costs and national insurance contributions, at the same time as pay is held down and pensions are being attacked, leaves most workers with a real cost of living crisis.”

Members of Unite who have been involved in industrial action were expected to speak at the protest in Manchester.

Protestors also took to the streets in Scotland, with one rally being held in Glasgow’s George Square and others planned for Dundee, Edinburgh and Aberdeen.

Ahead of the protests, the Scottish Trade Union Congress said the SNP-led government’s announcement of council tax rebates would not help the climbing cost of living.

Roz Foyer, its general secretary, said: “Temporary council tax credits will do little to protect workers from the ravages of escalating fuel costs as big companies continue to squeeze consumers for profit.

“Long-term solutions are needed, funding for wage increases across the public sector would be a good start and give at least some workers the protection they need, while also stimulating much needed wage rises in the private sector.”