“I haven’t myself seen any evidence of changes of behaviour in that particularity since the Prime Minister’s announcement on April 15.” 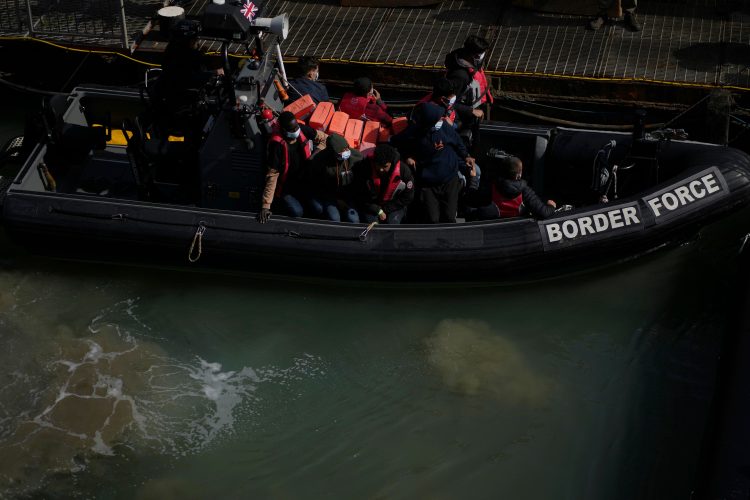 The top civil servant in the Home Office has said it is “impossible” to say how many people need to be sent to Rwanda to achieve the Government’s aim of putting migrants off making dangerous Channel crossings.

It comes as leaving survivors of human trafficking and modern slavery in legal limbo over their immigration status risks undermining successful prosecutions,

Matthew Rycroft, the department’s permanent secretary, said the success of the controversial scheme should be measured by the number of journeys deterred by flying those deemed to have arrived in Britain illegally thousands of miles away to the east African nation.

But he was unable to quantify exactly how many would need to be deported for this disincentive to kick in.

Appearing before the Commons Home Affairs Committee, Mr Rycroft also said the details on how the Government decides which migrants should be sent to an immigration removal centre and onwards to Rwanda need to be “retained in confidence”.

Asked what the screening process was designed to achieve, Mr Rycroft said: “The inadmissibility is about the method of arrival in the UK. So anyone arriving on a small boat or any other irregular entry is inadmissible. So that’s an easy judgment to make for an individual.

“Then the subsequent screening is essentially about safety of the individual.”

Put to him that not everybody who arrives in a small boat is being sent to Yarl’s Wood immigration removal centre and on to Rwanda, and asked if he is not allowed to share why some people are prioritised for this over others, he said: “Everyone who arrives that way is potentially eligible.”

Pressed on how it is then decided who is sent for removal, Mr Rycroft said: “I think that probably is an operational detail that needs to be retained in confidence.”

The top civil servant said it would “not be a victory” if more dangerous routes were taken as a result of the Home Office policy.

“I do agree we should be thinking about irregular migration in general and all of the different routes, and it would be a pyrrhic victory if this set of policies were successful in closing down the small boat route, but created something even more dangerous,” he said.

But he said he had not seen further evidence of migrants attempting to cross into Britain via roundabout routes since the announcement of the Rwanda policy.

“I think there was some evidence of that last year.

“I haven’t myself seen any evidence of changes of behaviour in that particularity since the Prime Minister’s announcement on April 15.”

Asked to quantify how many people need to be removed to the east African nation, in Home Office thinking, for its scheme to be successful, he said: “Well, I don’t think there’s a single answer to that question and obviously different people have different views about success.”

He said the department had done “a lot of modelling” on the number that would need to be sent away before the disincentive kicks in.

Pressed on whether it would be hundreds a year, or thousands, or tens of thousands, he said: “I don’t think at this stage it’d be right to speculate about those sorts of numbers.”

Asked again how many need to be removed before that disincentive will work, he said: “That is impossible to answer.”

Mr Rycroft told the committee that the views of civil servants are “irrelevant” when it comes to policies they may not personally agree with.

“The short version, of my view, is that the role of civil servants is maximum challenge of a policy before ministers decide it, in order to stress test it and make sure it is really robust,” he said.

“And then maximum support and implementation for that policy after ministers have decided it, provided it is legal.

“Now, it is irrelevant whatever any civil servant thinks about a policy, if the Government of the day has determined that policy.”

He said that civil servants are “here to serve the Government of the day, that is duly elected”.

“Now, if there are policies which people themselves feel or think are illegal, then that is a grey area,” he added.

Meanwhile, Mr Rycroft found himself in hot water for saying there is nothing the Home Office “loves better than a good crisis”.

He apologised if the remark was “overly flippant”, but insisted the department “does respond very well to a crisis”.

Asked if he could give examples of crises that had ended well in the department under his tenure, he said: “First of all, apologies if that was an overly flippant form of words. What I was getting at was that the culture in the Home Office, I think, does respond very well to a crisis.

“We’ve already just talked about Afghanistan and Ukraine. I think those are both crises the Home Office contribution to which has been something that I for one have been very proud of and I hope that everyone involved in it has been proud too.”

Challenged on whether the Afghan and Ukrainian crises had ended well, he said: “They haven’t ended well for either Afghanistan or for Ukraine.

Hope for Justice warned people rescued from forced labour can often spend years waiting to learn whether they will be deported to their country of origin.

It said the situation is being exacerbated by the new Nationality and Borders Act and the Government’s attempts to send asylum seekers to Rwanda, and lesser protection for people who arrive via illegal routes.

The charity made the remarks after the sentencing of two people convicting of trafficking at least 15 Slovakian men to the UK and using them as forced labour between 2010 and 2017.

Maros Tancos, 45, and Joanna Gomulska, 46, were jailed for 16 years and nine years respectively at Bristol Crown Court on Wednesday.

The pair were put under surveillance by officers from the National Crime Agency as part of Operation Langsat in partnership with the Slovakian authorities.

The couple usually recruited their victims from traveller camps and children’s homes in Slovakia, where they lived in squalid conditions, and were lured by the prospect of a better life in the UK.

But unlike many victims of modern slavery, the five men found in their home when it was raided in 2017 would, at the time, have had the right to stay in the UK as EU citizens.

Ellie Russell, UK advocacy manager at Hope for Justice, told the PA news agency: “We hear time and again that the lack of certainty in relation to their immigration status leaves survivors stressed, anxious and often lacking the everyday support they need to recover and rebuild their lives after exploitation.

“The long and often agonising wait for decisions on status invariably impacts on survivors’ well-being and recovery.

“They describe feelings of being left in ‘limbo’, waiting in often overcrowded asylum accommodation, unable to work, study or have access to mainstream benefits or long-term accommodation.”

Ms Russell added: “We know that survivors are far more likely to be able to participate in police investigations from a position of stability and safety, whereas when survivors are left in a limbo state, it is less likely perpetrators will be brought to justice.”

But despite failings of the UK’s immigration system, Hope for Justice is clear that reporting suspicions of modern slavery is the right thing for the public to do.

Adam Hewitt, a spokesman for Hope for Justice, said: “Members of the public should always report any concerns about modern slavery to the authorities.

“There are glaring gaps in the support offered to survivors of human trafficking and modern slavery, made worse by the new Nationality and Borders Act, but Hope for Justice strongly urges people to report anything they see that might be a sign of modern slavery.

“While survivors who lack adequate support or who face a risk of deportation may be vulnerable to re-trafficking – and Hope for Justice is campaigning for more support to stop this happening – there is still never any good or moral reason to choose to stay quiet and leave someone in an active situation of modern slavery.”

Mark Morrison, senior investigating officer for Operation Langsat, said the NCA would do all it could to support victims of trafficking, regardless of whether they were in the UK legally or illegally.

“(Human traffickers) make victims’ lives a misery and they make a lot of money out of this,” he told the PA news agency.

Mr Morrison said local police forces and the NCA carry out spot checks on sectors where modern slavery is commonly found, such as car washes and nail bars, but are always grateful for more information.

“We will take any information, we will look at that information and will then work out whether it is accurate, then from that we can then justify looking at whether we’re going to carry out surveillance like we did in this case,” he said.