“When the football team began taking the knee in solidarity, and against racism, they were booed, and what did Boris Johnson say? Not much. What did Priti Patel say?" 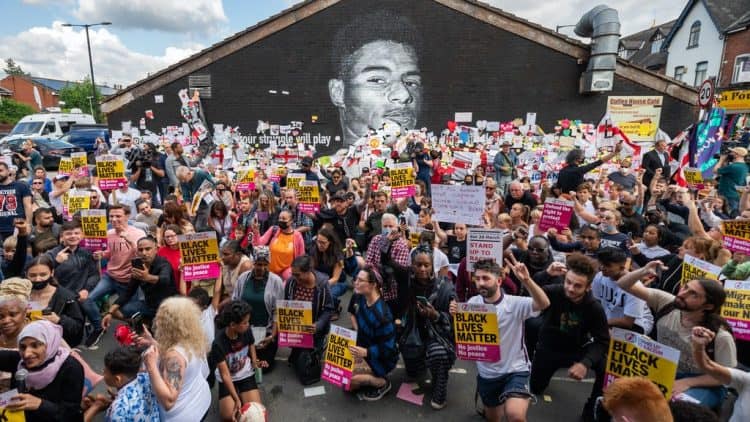 Hundreds of people have taken the knee beside the repaired mural of England footballer Marcus Rashford in an “incredibly emotional and powerful” show of support for the striker.

Around 200 people including some with signs reading “Black Lives Matter” made the symbolic gesture beside the recently vandalised artwork in south Manchester.

The mural was defaced within hours of England’s loss to Italy in the Euro 2020 final on Sunday, in what police are treating as a racist incident.

Artist Akse P19 has since repainted his monochrome depiction of the England player.

This is how the Marcus Rashford mural in Withington looks this morning ♥️ pic.twitter.com/vSsUx6gIcu

Addressing the crowd after they took the knee beside the mural on Tuesday evening, protester Lamin Touray said online racist abuse aimed at Rashford, and his teammates Bukayo Saka and Jadon Sancho who also missed penalties on Sunday, has “ignited an anti-racist movement” in Manchester.

The players were targeted with racist abuse on social media after the game, escalating a political row about racism in both football and society.

Mr Touray said: “Those players have shown us everything that is good about this country, black and white united against racism, taking a strong stance.

“We know the powers that be want this to go away, and the attack on Sancho and Rashford and Saka has ignited the anti-racist movement in this country and in this beautifully diverse city.”

Ritu Kumar, who lives in London but was home in Withington for the football this week, attended the vigil with her two-year-old son and took the knee alongside her mother and father.

“It was incredibly emotional and powerful,” the 34-year-old told PA.

“Marcus Rashford made sure that kids across the country didn’t go hungry, and for him to get the kind of abuse he got was just unacceptable.

“There is no place for racism in this world, whether it be Rashford, Saka, Sancho, my neighbour or your friend.”

Those present take the knee in front of the mural in solidarity with Marcus Rashford and his teammates Jadon Sancho and Bukayo Saka who were racially abused following Sunday's game pic.twitter.com/SrSR5Yse8P

She told the crowd: “Three black footballers have been viciously racially attacked on social media, but let’s be very honest – are we surprised?

“When the football team began taking the knee in solidarity, and against racism, they were booed, and what did Boris Johnson say? Not much. What did Priti Patel say?

Jaylen Waite, 10, said: “Marcus Rashford does not deserve these racist chants on social media, and white people need to respect the players who missed the penalties.”

Ed Wellard, the founder of Withington Walls, the community street art project behind the mural, covered the graffiti with bin bags on Monday, and hours later fans flocked to cover it with flags, flowers and anti-racism messages telling the striker he was a “hero” and “adored”.

As the artist added the finishing touches to the repairs, Mr Wellard said: “There’s been an outpouring of kind of love and solidarity, and it’s really heartening.

“It’s a lovely thing isn’t it? I watched the footage with my friends and saw those penalties being missed and all I felt was empathy and compassion for those young men, they’ve done themselves proud, on and off the pitch.

“I gave my 11-year-old boy a hug because he was crying and I wanted to give the players a hug.”

The word “f***” was scrawled over the huge artwork and the words “shit” and “bastard” were also written beside the word “Sancho”.

A spontaneous online crowd-funder for the mural has now raised more than £30,000, which Mr Wellard said will be used for further artwork.

He said he was upset at finding the vandalism and like the protesters, believes politicians need to “raise their game” on racism.

He added: “It was horrible, I was a bit teared-up. I was upset about the result anyway and the scenes we had seen at Wembley and stuff, it felt like a dark day for English football.

“And then to come out and see what had been written, it was repugnant, it was horrible.

“I wanted it covered before the kids went to school. No one should be seeing that.

“We’ve got politicians that are trying to divide us, we need to come together.

“That team came under criticism from our Government for taking the knee. So clearly at the very top we need to address that kind of attitude.

“We had the MP from Dover, Elphicke, criticising Rashford. That’s not acceptable.”

Rashford thanked fans for their support on Monday night, tweeting: “The messages I have received today have been positively overwhelming and seeing the response in Withington had me on the verge of tears.

“The communities that always wrapped their arms around me continue to hold me up. I’m Marcus Rashford, 23 years old, black man from Withington and Wythenshawe, South Manchester.”

The mural, based on a photograph by Daniel Cheetham, was created last November in recognition of Rashford’s work to tackle child food poverty.

His mother provided the quote on the mural, which reads: “Take pride in knowing that your struggle will play the biggest role in your purpose.”