“There is so much talent in these communities that could be going to waste but not anymore." 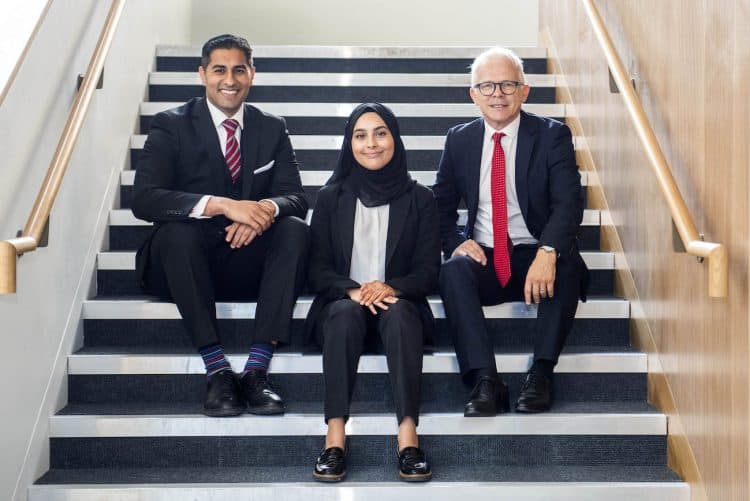 A pioneering London headteacher who has helped underprivileged students win places at top American universities has announced he will open two new sixth forms – on the day one of his students won a place at Princeton.

Former City lawyer turned headteacher Mouhssin Ismail has partnered with the City of London Corporation to open new centres in Hackney and Islington.

They will seek to replicate the success of the Newham Colliegate Sixth Form, based in East Ham, which has helped students win all expenses paid places at MIT, Harvard and Princeton.

Despite serving one of the poorest communities in the country, 95 per cent of students leave for Russell Group universities.

The expansion was welcomed by Newham Colliegate sixth former Ayesha Karim, 18, who has become the latest student to secure an offer at an Ivy League School.

She will take up a place at Princeton to study engineering next September.

The project is being backed City of London Academies Trust (COLAT) sponsored by the City of London Corporation. The CEO of the trust is Department for Education advisor Mark Emmerson.

Mr Ismail, who gave up a six-figure salary in law to lead the NCS in his hometown of Newham, will serve as Director of Standards for both schools and across all COLAT schools.

He says students from poor backgrounds are still not able to compete with their richer privately educated peers for the top university places.

Mr Ismail added: “If we are serious about social mobility, we need to do things differently and provide talented young people with opportunities they simply don’t get in their normal state school”

“Beacons of excellence within the state sector such as the NCS are levelling the playing field but only for students in Newham. What about the rest of the country?

“We have students applying to us from all over London and into Essex.

“There is a huge appetite amongst highly aspirational working-class families for their children to have the same access to the top universities which their peers from independent schools enjoy.

“The problem is that places like the NCS are the exception rather than the rule and so we felt it was our responsibility to offer more students from less privileged backgrounds the types of opportunities those in Newham have been afforded.”

Ayesha has been offered a place at Princeton where she will study engineering at the same campus as US President John Kennedy, former First Lady Michelle Obama and Amazon boss Jeff Bozos.

She said: “This is a completely life changing opportunity. I have the chance to go to Oxford or Cambridge but this is on another level entirely.

“I am so excited to see where this amazing opportunity will take me. Going to Princeton is entirely because I choose the NCS over other sixth forms.

“It is not just that they put these kinds of opportunities in front of you and make you believe you can achieve them.

“They also put you in a position where you actually have a chance of being accepted. For example, I had an all-expenses paid work experience placement at CERN in Switzerland, that went a long way to getting into Princeton.

“When I heard the NCS were opening other centres, I actually cried, I was so overjoyed. It means students from other areas like Ilford and Newham are going to get those kinds of opportunities.

“There is so much talent in these communities that could be going to waste but not anymore. There should be an NCS in every area of the country.”

Mark Emmerson said: “The aim of CoLAT is to ensure that all of our schools provide outstanding education for the communities they serve.

“The additional pathways these two new Collegiate Sixth Forms will provide will further enhance the already broad offer we have available for students aged 16-19 in our North London schools.

“With the new Sixth Forms following closely the exceptional transformational model created by Mouhssin at NCS this new provision will enable the most ambitious and talented students from Islington and Hackney to access the best universities in the UK and abroad in far greater numbers than have been seen to date.”

She said: “This is fantastic news. The simple reality is that if I had not lived in Newham and attended the NCS, say had lived in Hackney, then I would have not gone to MIT.

“Of course, there are great universities in the UK but who’s to say I would have had the support and quality of teaching which would have allowed me to access those universities.”