Soaring bills, empty shelves and a 'perfect storm' heading our way that will leave families "thousands of pounds poorer", the paper reported. 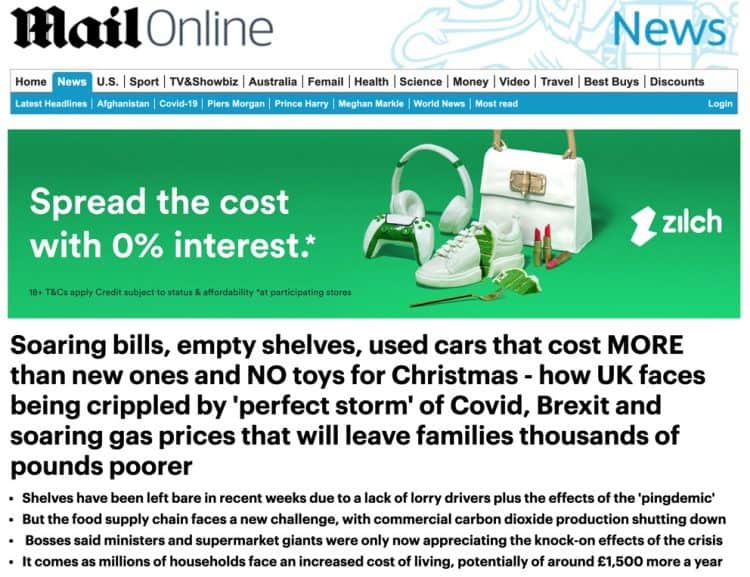 The penny looked to have dropped for another pro-Brexit newspaper this weekend after the Daily Mail warned the UK faced being crippled by a “perfect storm”.

Business secretary Kwasi Kwarteng is set to hold a fresh round of crisis talks with the energy industry amid fears more small suppliers could go to the wall following a surge in gas prices.

OGUK, representing the offshore oil and gas industry, reported wholesale prices for gas have surged 250 per cent since January – with a 70 per cent rise since August alone.

Following a weekend locked in emergency talks, Mr Kwarteng acknowledged it was a “worrying time” for customers, but said he was confident supplies could be maintained.

No toys for Christmas

Meanwhile, disruption to global shipping that has left supermarkets without some product lines also threatens to affect deliveries of toys this Christmas.

The UK is said to be short of 90,000 HGV drivers, triggering fears that gaps on shelves will get worse.

Christmas shoppers have also been warned against getting caught out by unexpected post-Brexit charges when buying gifts from the EU.

Changes introduced on 1 January mean some UK consumers buying presents for family and friends from EU businesses may need to pay customs charges when their goods are delivered.

Stocking fillers and other small items will not attract charges but HM Revenue and Customs (HMRC) warned that people buying excise goods – tobacco or alcohol – or ordering luxury items or presents in consignments worth more than £135 will be affected.

Anyone buying a more expensive product from abroad may need to pay import VAT, customs duty and excise duty when they receive their order.

For The Daily Mail, it looks like the succession of worrying events has resulted in an awakening over the UK’s split with the EU.

And they’re not alone.

Earlier this month The Telegraph took leave of its pro-Brexit crusade after it questioned whether the UK’s divorce from the EU has really been all it’s cracked up to be.

Assistant editor Jeremy Warner engaged in a war of words with the government, saying they seem “intent on wasting our sovereignty”.

He added that it is now “abundantly clear” that the deal struck with the EU was a “terrible deal for Britain” that imposes “multiple different obstructions on trade”.

Warner warned it could also “seriously damage the integrity of the union with Northern Ireland.”