"Should we just crack on and nuke Paris?", the host asked. 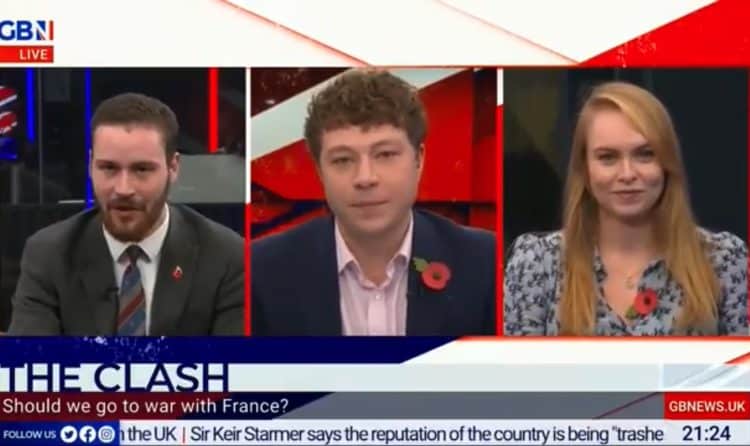 GB News presenters debated going to war with France on ‘The Clash’ show yesterday, a week before Armistice Day.

Host Patrick Christys chaired the debate as tensions over post-Brexit fishing rights and trade agreements continued to heat up.

Last week, in a disagreement over how many licenses have been granted to French trawlers operating in British waters, France’s president Emmanuel Macron warned the UK could face retaliatory measures including British boats being banned from landing their catch in France and increased customs checks on exported British goods.

Priti Patel has also been reported to be at loggerheads with France over the number of migrants crossing the channel following the UK’s first instalment of a £54 million payment to help quell the crossings.

Discussing the developments, GB News host Christys asked a panel whether we should just “crack on and nuke Paris?”, much to the bewilderment of people on social media.

Guest Benjamin Loughnane responded that he is “not necessarily suggesting” we go to war with our neighbour, but we should just “threaten them and they’ll probably surrender in five minutes anyway.

Reaction to the clip has been fierce with Professor Tanja Bueltmann saying “there is no normal about this kind of question and the way it was being discussed.”

Otto English added that “only those with no memory of war, no comprehension of war, no experience of people who lived through war or knowledge of what war is – would discuss whether it is ‘sensible’ to go to war.

“These GBNews commentators have the awareness of cabbage – the intellectual capacity of lard.”