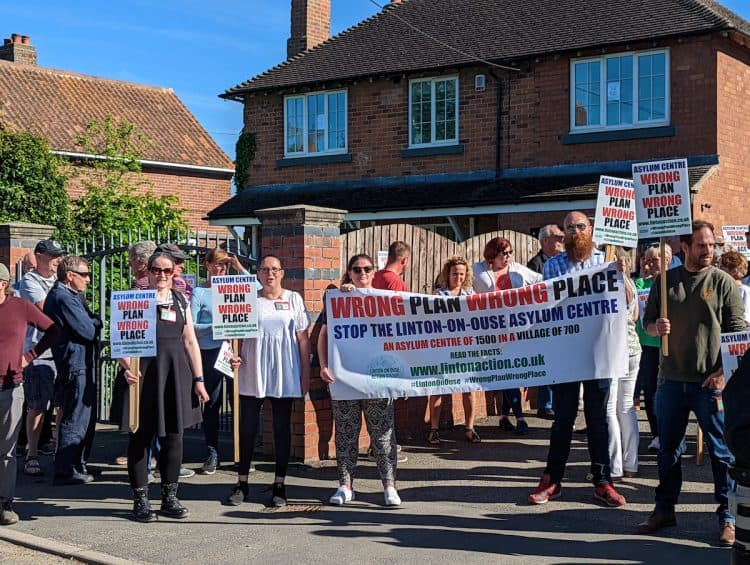 Furious residents have taken to the streets to protest plans to house up to 1,500 male asylum seekers in their village.

The protests coincided with a special parish council meeting on the plan to turn a former RAF base, near the centre of the village, into an asylum seeker reception centre.

Those kept at the facility will have the freedom to come and go as they wish, though they would be expected to be back at the site by 10pm.

But residents worry that limited local transport options will have a detrimental impact on the safety of villages – as well as the well-being of asylum seekers.

Officials at the meeting were heckled as they told those who turned out to witness speeches that they were committed to working with the local community.

And one woman in the audience was applauded when she said: “Whatever you say, you are not going to give residents any peace of mind.”

Another resident added: “Are they allowed the freedom of the village? Where is the security? Individuals can go where they want. Who is supervising them?”

A senior North Yorkshire Police officer said patrols have been increased and his officers will be taking heed of residents’ concerns.

He added that two police officers would be on patrol between 8.30 and midnight every day.

Zoe Metcalfe, North Yorkshire Police, Fire and Crime Commissioner, said this would be in place when 60 asylum seekers were at the site.

The first arrivals are expected at the site later this month.

She said that she didn’t want anyone to feel unsafe in their community, explaining: “I am not far away. We are going to do everything we can to make you feel safe.”

A resident claimed a police officer had told women to not wear short skirts outside, but Metcalfe said that it was unacceptable behaviour from the officer.

And another member of the audience was applauded when they said: “People are upset. 1,500 men are coming to our village of 600 adults.

“What are you doing to carry out a proper impact assessment?”

Another frustrated resident added: “I don’t think you are grasping the concept of what you are doing to our community.”

The Linton-on-Ouse Action Group (LoOAG) commended a no-confidence vote in the Home Office, which was passed overwhelmingly by North Yorkshire county councillors on Wednesday (18)

Group spokesperson Dr Olga Matthias said: “In what now feels like a concerted effort, they have ignored established processes and protocols.

“The Home Office, which should be at the forefront of the overarching objective of government – to keep its citizens safe – has set out to destroy this community and our way of life.

“With no consultation, no planning permission and no risk assessments on any front, and despite overwhelming opposition from all sides, they are ploughing ahead with an insane plan to place 1,500 asylum seekers in a rural village.”