Andrew Banks was handed an immediate jail term after handing himself into the police when he was confronted by his father. 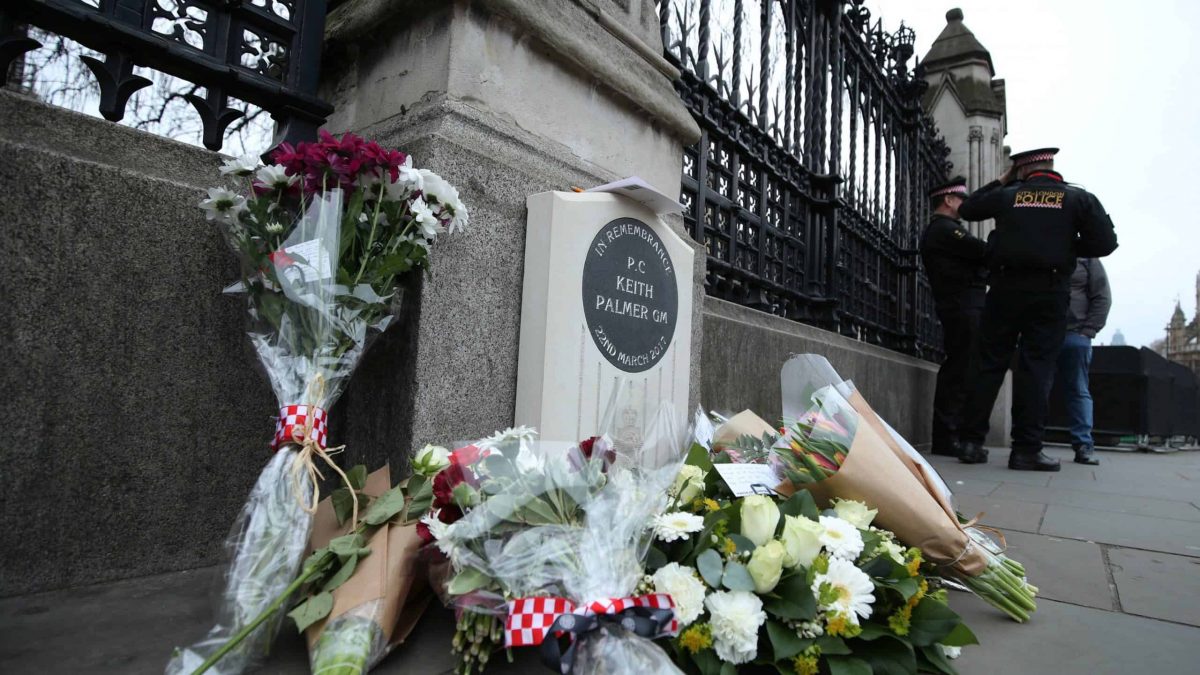 A 28-year-old football fan has been jailed after admitting urinating next to the memorial dedicated to Pc Keith Palmer, who was stabbed to death in the 2017 Westminster terror attack.

Andrew Banks, of Manor Road in Stansted, Essex, was handed a 14-day immediate jail term after pleading guilty to outraging public decency during a far-right protest in central London on Saturday, an act which drew “revulsion” from the public.

Banks said he had been on an all-night drinking session in the capital and decided to join fellow football supporters travelling to London to “protect the statues” – but admitted he did not know which statues.

He also said he had no idea about the memorial to Pc Palmer, and handed himself into police when he was confronted by his father, who saw images of the incident online.

Jailing Banks at Westminster Magistrates’ Court on Monday morning, Chief Magistrate Emma Arbuthnot said: “I accept you were drunk and did not know where you were urinating.

“Your explanation is you had 16 pints to drink, you hadn’t been to bed, and a group of football supporters were coming up to protect the monuments.

“The irony is rather than protecting the monuments, you almost urinated on one. That was more by luck than judgment.

“You showed no respect at the time for a man killed while protecting the Houses of Parliament.”

She said the incident had caused “public revulsion”.

Prosecutor Michael Mallon described how Banks was spotted at 10.59am on Saturday walking along Bridge Street in Westminster, going behind a barrier and urinating next to the memorial.

He was reckoned to be urinating for around a minute, the court heard.

Banks was not seen by police at the time, but his actions were caught on camera by a photographer and were widely shared on social media.

Absolute shame on this man.

Of all the images to emerge over these few testing days I find this one of most abhorrent.

Mr Mallon said: “Mr Banks had been at the protest.

“The father (Banks’s father) confronts Mr Banks and Mr Banks admits it was him but states he didn’t know what the memorial was for until it was explained to him.

“He stated he attended the protest to ‘protect the statues’, but didn’t know what he was protecting.

“He said he desperately wanted to urinate but couldn’t find a toilet. He did not know there was a memorial where he was urinating.

“He said he was very remorseful.”

Banks, a Tottenham Hotspur fan, was said to have mental health problems, and had tried to take his own life, the court heard.

The defendant had no previous convictions and was “ashamed by his actions”, defence counsel Stuart Harris said.

An elderly woman in the public gallery gasped and fled from the courtroom with her hands over her head as Banks was sentenced at the end of the 15-minute hearing.

Banks, wearing a white T-shirt and a pair of grey Adidas jogging bottoms, was also ordered to pay £80 in costs.

The incident was widely condemned by politicians including MP Tobias Ellwood, who gave first aid to Pc Palmer as he lay dying after being stabbed to death in the grounds of Parliament by armed extremist Khalid Masood on March 22 2017.

Saturday’s far-right demonstration took place after thousands of anti-racist protesters marched in multiple events sparked by the death of George Floyd at the hands of white police officers in the US last month.

Those attending Saturday’s far-right demonstration claimed to be guarding the statue of Winston Churchill as well as the Cenotaph.