More than 600,000 people were ‘pinged’ by the NHS Covid-19 app in England and Wales last week alone. 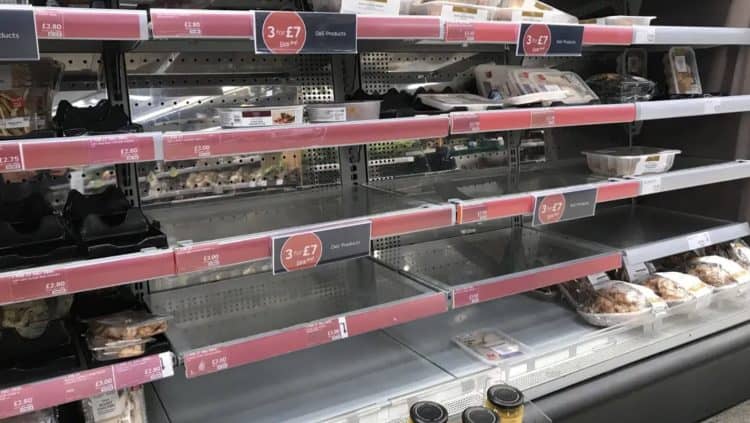 Food supply chains are “right on the edge of failing”, a meat industry body has warned, as the ‘pingdemic’ plunges businesses across the UK into chaos.

The British Meat Processors’ Association (BMPA) said that, even discounting the impact of the coronavirus crisis, skill shortages were so acute that some plants had reported vacancies of up to 15 per cent in permanent positions.

The stark warning comes after car plants, railways and supermarkets across the country warned that strict self-isolation rules – which have forced hundreds of thousands of workers into isolation – was pushing supply chains to the brink of collapse.

The BMPA said businesses are “increasingly concerned about the threat of empty supermarket shelves, just as peak summer demand hits” – but said industry representatives have still not obtained “definitive” guidance from the government.

Ministers have urged businesses to follow the isolation advice, after a boss of a food distributor revealed he was asking delivery drivers to take tests over quarantining.

The government has said a “very narrow” list of sectors whose workers will be exempt from isolation on Thursday.

Nick Allen, CEO of the BMPA, said: “According to the latest verbal advice we’ve been given, we think that exemptions will be very selective and difficult to qualify for.

“At this stage we understand that companies may have to apply separately for an exemption for each individual worker.

“This would throw up an added wall of bureaucracy and be completely unsuited to managing a fast moving-production line that’s made up of people with multiple different, but equally vital skills.”

He added: “If the UK workforce situation deteriorates further, companies will be forced to start shutting down production lines all together.

“So, it’s for this reason that we’ve been calling on the government for months to add butchers to the Shortage Occupation List, which would allow the industry to temporarily fill these growing vacancies with overseas workers until the current crisis has passed.”

Supermarkets have urged Brits not to panic buy in response to reports of emptying shelves, insisting they are continuing to receive regular deliveries.

The UK’s biggest supermarkets described any shortages as “patchy” across stores but said there was no need for customers to change their shopping habits.

They added that any gaps on the shelves were temporary as they awaited deliveries, and were occurring in pockets rather than across supply chains.

The ‘pingdemic’ is compounding a critical shortage of lorry drivers due to the impact of Brexit and Covid travel rules.

Earlier this month, the government announced it would relax rules around lorry drivers’ working hours to make up for shortages, a move labelled as “political point-scoring” by Labour.

Labour County Councillor Alexandra Bulat, who has campaigned heavily for EU citizens’ rights since Brexit, said there are “good reasons” why driving hours limits existed in the first place.

“Drivers need to be well-rested for their safety as well as the safety of all road users,” she told The London Economic. “Instead of pressuring drivers to drive in unsafe conditions, we should think about why these shortages exist.